I’m glad this series of articles has evolved to include an interactive dialogue between other puffins and myself. I think that helps keep all our feet on the ground (or deck) and remain relevant to one another.

Until I read comments on Part 27 I had in mind to take another trip on the Time Machine for this one .   We would have gone forward again to 2006 and back several centuries to the period when Europeans and South East Asians met one another for the first time with colonialism and piracy common throughout the area and sometimes hard to distinguish from one another regardless of the race and country of the perpetrators.

As a result of the Part 27 comments I now think it would be better to continue the account of my experiences in 1997 for another couple of articles and postpone the Time-Machine trip until later. That will then match an hiatus in my plans for my first long cruise from which I learned a lot that helped me in the years that followed.

As usual, I thank all who read and commented on my trip around Cape Wrath and select below those who made a point or asked a question that has motivated me to write something new.

I loved Sharpie Type 301’s comment in which she described a trip to the Lady’s Room during a night out and saw on the walls “naughty” sea-side postcards popular in years gone by. She even included a copy of one that she implied reminded her of herself.      Then I worried that might have been a similarity of appearance or state of mind and couldn’t decide which.       I didn’t want to give offence whichever was correct and so decided to play it safe and not reproduce it at all.    The inquisitive amongst you will have to look for yourself amongst the comments included in the link to that article under the Ancient Mariner name.

Foxoles too, attracted my fellow-feeling by confessing she still cried about an early love when thinking about the Fair Isle jumper she knitted for him. I don’t think that was at all pathetic. A great deal of our greatest literature, music and art is a type of requiem for another person or ideal. I think the tears are really triggered by a realisation one is ultimately alone in the world. Calling them pathetic is just a way of girding ones loins and getting on with the practicalities of life, hopefully including new and happy events and people.

It was FJ’s comment that changed my mind about the sequence in which my tales could best be presented. In 1997 I was absolutely stunned by some of the sights I saw on Lewis and Harris and reproduce in this article in much diminished form. Still, I hope you enjoy them as much as I did during those fabulous days.

I’m also glad my articles have helped Wattylerswife appreciate more clearly the beauty of Scotland in fine weather. Admittedly, that’s not available very often, and when it is the midges can be horrendous; but we mustn’t allow those normally present problems to damage the enjoyment we derive from the few occasions when they are absent.

And yes, one does sometimes get a special view when at sea but it is often limited in range. That’s because the horizon from eye-level on a small yacht, at about 10 feet above sea level nearby, is approximately 4-5 miles. One can “see” farther over the horizon by radar because the antenna is usually mounted a good bit higher than a person standing on the deck. And, of course, an object on the horizon that has an altitude of its own above its local sea level can be seen from farther away according to its elevation. But, generally speaking, photos taken from yachts are best for near-views and for seascapes and skyscapes. How about this one for a bit of both?

I was saddened to learn of Commervanman’s experience of his boat being beached in a typhoon. I had Alchemi hauled out of the water in 2005/6 for short -term storage and anti-fouling. Next to me on the Hard was a large yacht owned by an Austrian sailor that had been moored at Rebak Island marina just offshore Langkawi in 2004 when the Tsumani arrived.   He had been repairing and refitting his yacht at Port Dickson for the last 15 months when I met him.

His story would have made a good article.    When the original and reflected waves arrived the mooring lines on most yachts had broken leaving them churning about in the marina’s waters.   My Austrian neighbour’s lines were very strong and held but the wave lifted the pontoon to which he was moored off the posts at each end.    It had then acted like a medieval flail clubbing other yachts out of the way and defending his own from direct impact.   He and his partner got off just in time and watched it all happening from high ground.

Even if Commervanman’s story is less dramatic, I for one would like to know what happened and how the recovery is progressing.

This next picture shows the remains of another boat, caught in a tropical storm in the Caribbean when off the uninhabited Las Aves islands in Venezuela.   The skipper of this one wasn’t so lucky as my Austrian neighbour or Commervanman. He must have perished during the shipwreck and though the initial damage must have been less than shown in this photo it was obviously impractical to recover it at all. Apart from remains of the upturned hull seen here there were bits and pieces of cabin lying around as well.

To help you link my narrative and photos with places I reproduce again the planning map for this section of the voyage.

We left Achriesgill in Loch Inchard at 08:30 on 19 August and managed to sail for a couple of hours in very light winds around 10 knots before it dropped away altogether for six long hours. We wanted to cover the 45 miles to Stornoway in daylight requiring about ten hours at a modest and comfortable cruising speed and had to motor to maintain progress until being able to sail again for another two hours in the late afternoon.

The passage was enjoyable as one of those balmy Scottish days when the sea is calm, the sky blue and the mainland mountains wreathed in haze. My feeling of physical well-being was mixed with moments of deep sadness as I remembered happy family holidays in the region, but these too were dispelled by our closest sighting yet of a dolphin about six feet long that came within ten feet of the boat. It made several passes in the classic style but then swam off to be seen no more.

We enjoyed fresh food for most of this year’s voyage and this kept in Alchemi’s fridge just as well as it would have done at home. A pattern of shopping once a week for meat and veg with a milk and bread run every two or three days seemed to serve us well. No doubt we could have lasted longer without these excursions if we had adopted a more disciplined regime but we found it pleasant to spend a day or two in port to see the towns visited and vary the pace of our cruising.

The Outer Hebrides is the name given to the whole string of islands farthest west from the Scottish mainland and lying about 180 miles from north to south above and below 57.8 degrees of latitude. The largest of these is a single island called Lewis and Harris and Stornoway is the largest town on Lewis which is the northern part comprising about two thirds the area of the whole. The southern third is more mountainous and difficult to access. No one seems to know for sure where the names originated but some suppose they came from rival branches of the clan McLeod who claimed sovereignty over both when challenged by outsiders. Here is a more detailed map of this section of Alchemi’s travels – 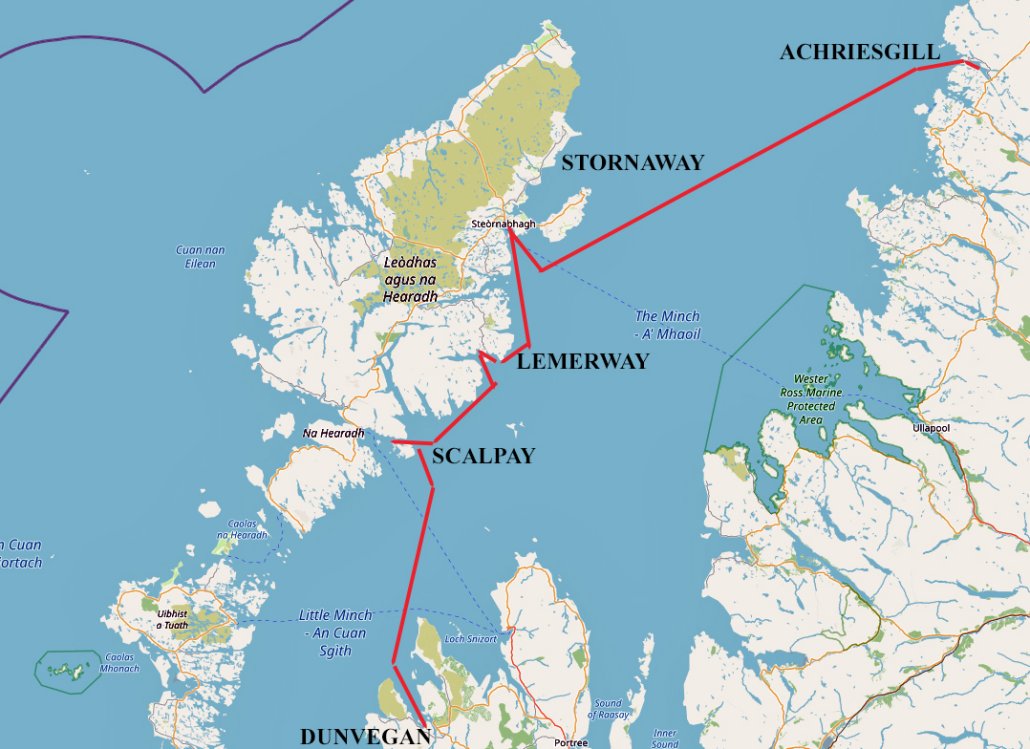 Stornaway was interesting but we found it a rather dour and utilitarian sort of town – good shops though. Like Stromness before and Portree after it suffered from a dirty harbour so different from the beautifully clean Scandinavian coastal towns and harbours. Scotland’s natural beauty matches or exceeds the Swedish and Norwegian land and seascapes but her inhabitants don’t look after their physical surroundings nearly so well.

The anchorage at Lemerway is situated in a bay fringed with rocks on the north shore, protected from the sea by a twisting approach and from west winds blowing down the loch by a small hill at the edge of the bay. We lay there peacefully all night and, skirting one of the ubiquitous fish farms, made our way out to sea again on Saturday morning bound for the small island of Scalpay at the south of Harris.

We had a fine view of the unpopulated Shiant islands as we tacked to and fro against a headwind when passing down the sound of the same name. Our timing was fortunate as we were not badly affected by the last of the flood tide and passed through the narrowest part of the sound without getting thrown around too much by the rough seas that sometimes develop there when the ebb flow gets going.

The tide was stronger as we went up the Sound of Scalpay, beneath the bridge linking it to Harris that was still under construction at the time. Alchemi’s engine was sufficiently powerful to drive us forward against the flow and many swirling eddies created by its speed over underwater obstructions. The North Harbour was crowded with fishing boats but we found anchorage out of the Fairway and set off in the dinghy to enjoy a walk around the island. At least, Norman and I did. Michael who is not a great walker settled for a short stroll and a ‘phone call back home.

There is a surprising amount of new housing on Scalpay with roads to match. Substantial taxpayer’s money is clearly being spent here to sustain the local population (2021 note – or were there also rich incomers with holiday homes?)  Some were clearly from long established families because we were delighted to hear unaccompanied but melodious plainsong as we strolled past the church.

My memories of Scalpay though are overwhelmingly ones of the calm waters and conditions of our anchorage. Here are digital copies of the four film print photos that I hope will show you why, despite digitising and resizing the scanned versions having degraded their quality.

Sunday was a beautiful day with a force 3 breeze, calm sea, light and fluffy cumulus clouds and bright sunshine. To this was added the brightest and largest rainbow imaginable as we looked back towards Scalpay and the mountains of Harris behind.

As the day wore on the wind became slightly less favourable and again we needed to tack to enter Loch Dunvegan on Skye.

Having done so we enjoyed a beautiful and peaceful sail down the loch to its head where we picked up a visitors’ buoy laid by the Highlands and Islands Enterprise Board.