On Monday, July 12th, Oberfuerher E. Minus MacRunt’s inveterate psychopathy morphed into full blown psychosis. He had his lackeys dig out the 1942 ordinance below, whited out the word “Jew”, replaced it with “Unvaksinated Vurmin”, (like his virility, MacRunt’s spelling is not quite what it should be), gave a demented speech on television, and that was that; in his eyes at least. 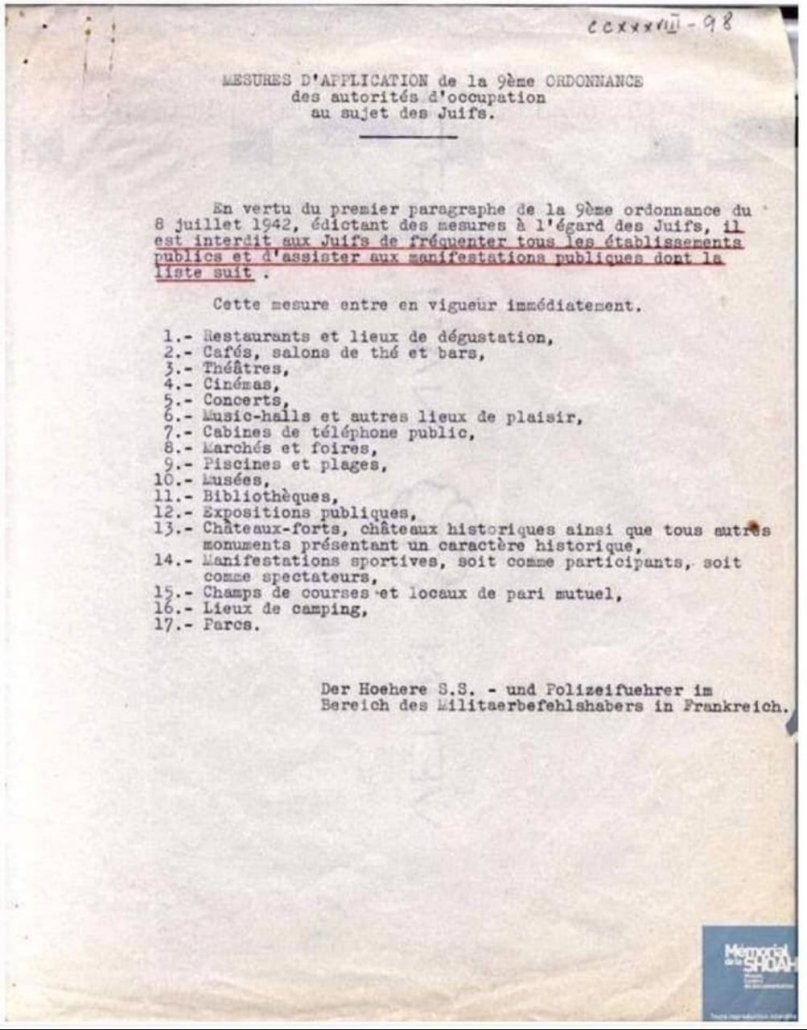 I have no idea whether MacRunt in his puerile megalomania believed that the people of France would take his latest bout of insanity lying down. Having a president who not only looks like Ted Bundy but also has his personality was bad enough. When, that same evening, they read that Kim No-Dong of North Sorea had (nearly) gone on hunger strike from envy, the French revolted. 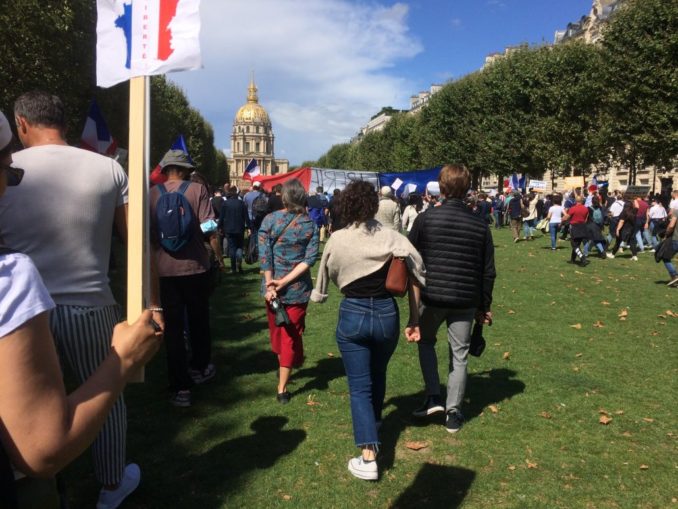 A first protest took place at the Bastille Day parade, which MacRunt had decreed he alone was allowed to attend, and quickly turned into fisticuffs with the regime’s storm troopers. This was just a dry run for what was to come. 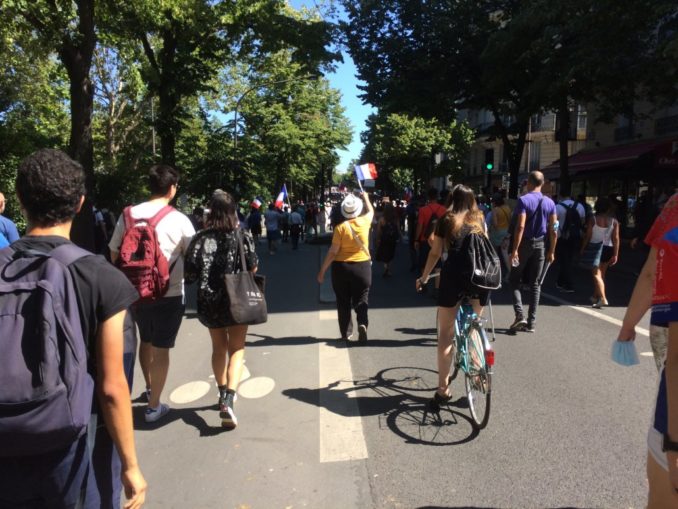 A march was announced for Saturday, July, 17th. Of course, the French media, also known as the Daily Pyong Yang, prophesied that only about half a dozen conspiracy theorists would attend.

I am not much of a one for demonstrations, in fact had not been to one since I was in my first year at university several decades ago. Nevertheless, I decided that such a shift in civilisation warranted a change of habits. 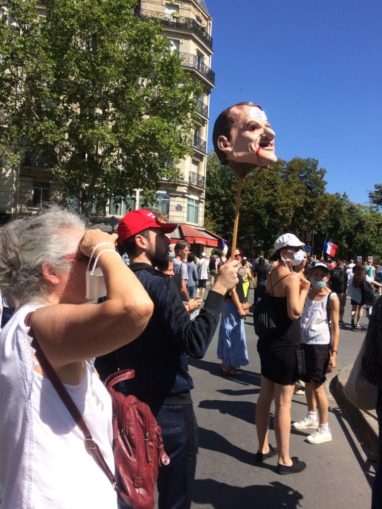 Strangely enough, the weather that Saturday was fine. Despite global warming, this Summer has been unusually cold and wet, so much so that eminent scientists took the trouble to appear on television to explain quite logically that it is cold because it is hot. 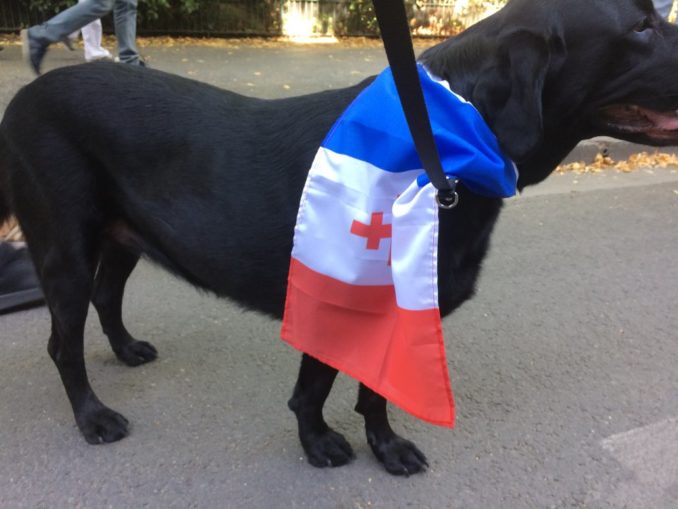 We gathered in front of the Comédie Française, France’s national theatre. I arrived an hour before the march was due to start and was surprised at two things: first, regardless of what advertisers would have us believe, everyone was hideously white. I thought to myself that our (unwelcome) guests may not be that concerned about France’s future. After all, unlike us, they have somewhere to run to. Secondly, the number of people already present  and the seemingly never ending flow of arrivals left me speechless. Just before we set off, I managed to climb on to a bollard and, however hard I tried, could not see where the crowd ended. It was not so much a sea of human faces as a Pacific Ocean of them. There were even more people standing on the pavement, clapping and cheering as we marched past. Locals leaned out of their windows to give us thumbs up. 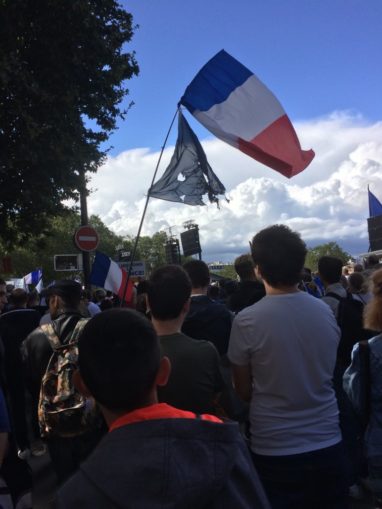 After nearly eighteen months of brutal forced isolation, gloom and morbid predictions, the joy and fraternity seemed almost strange, as if they had never existed before. I suspect we had all forgotten about them. Real France was back, and back in force. 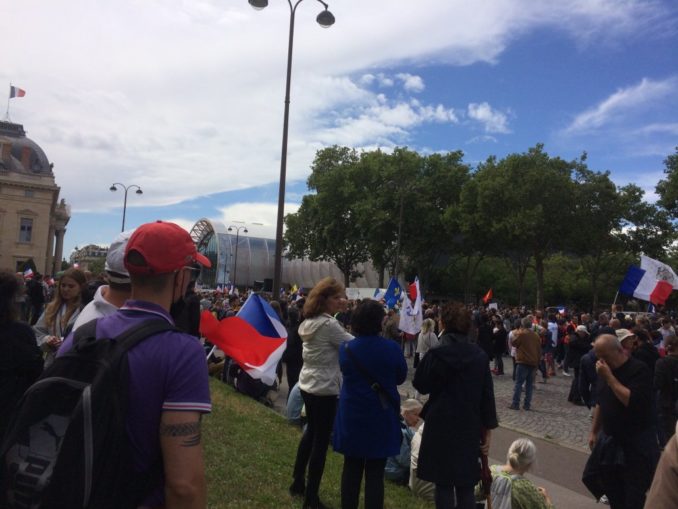 Everyone marched: families from all walks of life, sometimes three generations together, students, retirees, Bretons playing the bagpipe, young women with infants in slings despite the lockdown-induced baby-crash, what we call “luvvies”, believe it or not, and even a tiny, trim, and eager lady in her nineties.  That sent a chill down my spine; not that the lady was not perfectly pleasant, even admirable, but I reflected with horror that if those born in the late 1920s are worried enough to go out and demonstrate, then the situation is dire, indeed. Her generation have been there before; they know the signs. 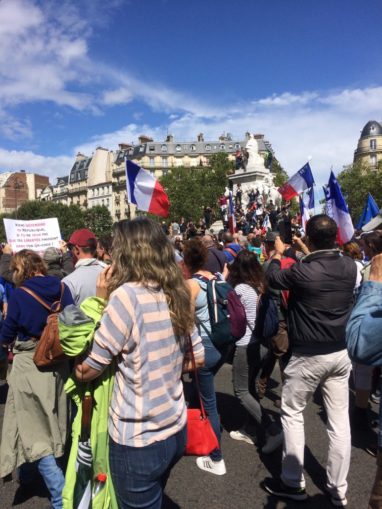 Catholic priests enthusiastically marched with us (France is a Catholic country! Who would have thunk it?) notwithstanding Pope Frankie-Does-Dallas’ daily drivel. So did dogs, big and small, which barked furiously every time they heard MacRunt’s name; and they heard it often. I must say that I would be especially uneasy were I the president of a country whose dogs objected to me so loudly.

In French, MacRunt’s name rhymes with everyone’s favourite word on here, as well as “prison” and “resignation”; so I’ll let you imagine the fun we had chanting slogans. A triumph of French creativity! 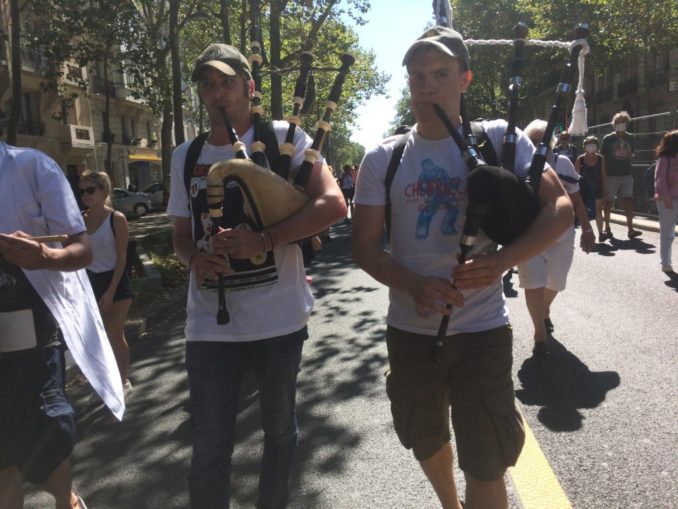 The following Saturday, we marched again along a different route, and the one after that. In fact, come Saturday lunchtime and in two hundred cities and towns we are all outside, remonstrating, protesting, asking for Frexit, making new friends, happening by chance upon old ones. Every new march is larger than the previous one even though the Pyong Yang Express claim that we are an ever dwindling minority of stubborn and mentally-challenged Neanderthals; so much so that at the last march, we generously offered to buy them a pocket calculator.

Our resistance movement does not just involve marching against tyranny. Every week we withdraw our money from our bank accounts and pay everything with cash. Dissident lawyers working pro bono have been inundating every French institution one can think of with lawsuits. A small law firm filed a litigation on behalf of 75.000 complainants. The list of names alone ran more than four hundred pages. 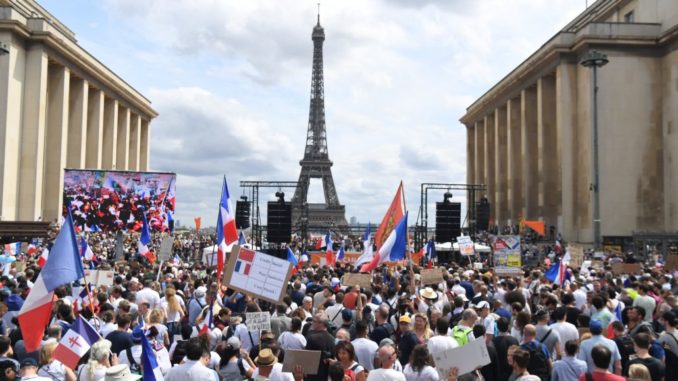 Since we, Unvaksinated Vurmin, are barred from all bars, cafés, and restaurants, we organise what are called “Wild Terraces.” In the evening, we bring chairs and trestle tables, plant them on a main square, or, preferably in front of a restaurant (they are all depressingly empty), and have a giant picnic where everyone is welcome. If a transient nonentity believes he can undo with a stroke of his leaking pen more than two thousand years of French hospitality, he has another think coming.

Most of all, we boycott all businesses where the “Shame Pass” is required. Already hypermarket chains together with bar and restaurant owners have been whining about losing business, but instead of demanding that it be withdrawn,  pure and simple, they beg the government for more taxpayer money. This is not going to end well for them, let me tell you. 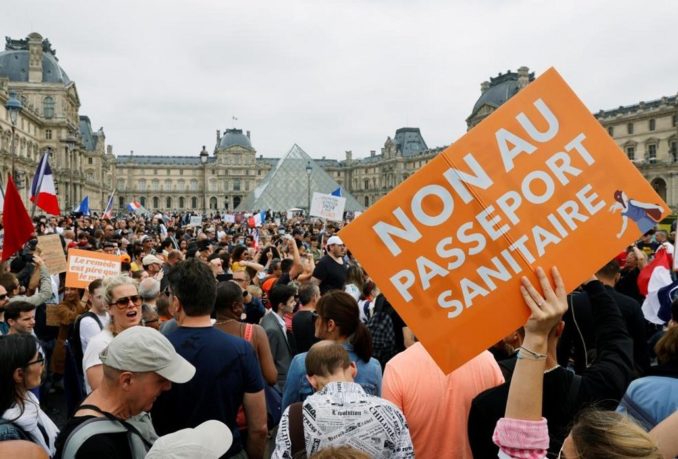 Several platoons of trolls descend daily on eateries, they have never patronised, which comply with the Shame Pass. We go on Tripe Advisor and write that the chairs are hard, the waiters surly, and the food undercooked. Because I am contrary, I often write that the chairs are surly, the food hard, and the waiters undercooked. As a result, the owners take to Fesse Bouc to whinge about us meanies giving them traumatic dreams which keep them awake at night. 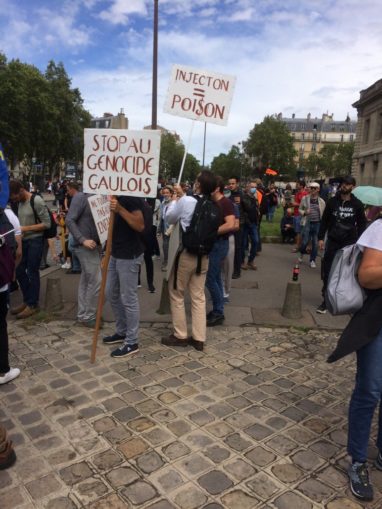 So far, our resistance movement has had little effect. The health sinister, a sadistic quack whose psychopathy is written on his face, allowed self-testing and extended the validity of a negative result from two to three days. MacRunt and his grandmother went into hiding in an Island fortress in the South of France. The French Caribbean have been rioting like there is no tomorrow (and, perhaps, there is not) since he cruelly imposed another tropical summer lockdown on them. Doctors there, as well as many major hospitals in Mainland France, have been on strike since mid July. The fire brigade, lorry drivers, librarians, and even iconic department stores have announced they will take industrial action next week. 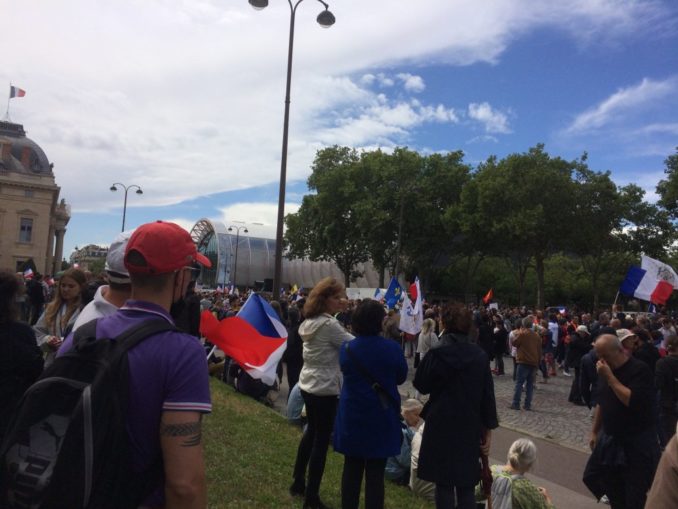 MacRunt, a man without qualities who fancies himself a great general and brilliant strategist, sent the army to quash the riots in the French Caribbean, but since he decided to impose the so-called vaccine on the armed forces their heart is not in it. And now, the whole of French Guiana is going on strike. Since it is where France builds and launches the space rockets it is so proud of, I have no idea how that is going to play out. 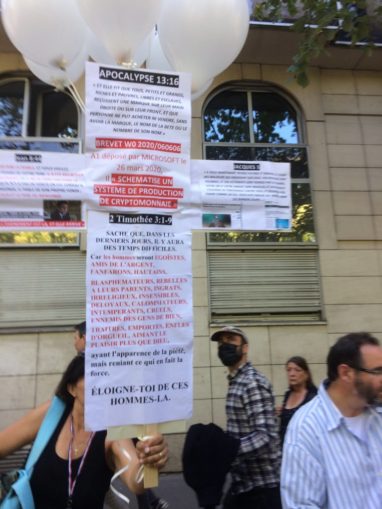 The government organised a counter protest in Paris, which turned out to be a real farce. Only five mental patients (I personally believe they had been paid) attended, wearing triple face masks and looking unconvinced as they mumbled how much they liked restrictions and genetic injections. 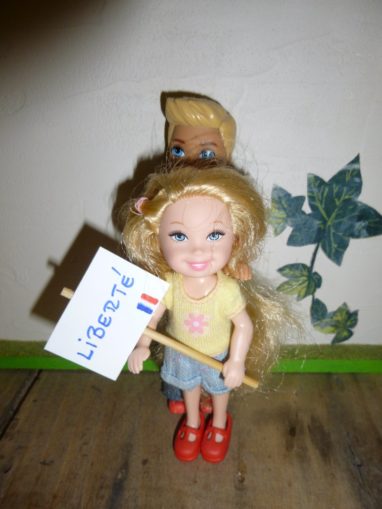 Still, I am not optimistic. Totalitarianism has one more time raised its hideous head. Having read Hannah Arendt, I fear that after the pure and impure have been designated, the next logical step will be concentration camps. Of course our ignoble yet manipulative elites will fish a new-fangled name out of their diseased minds. That which we call a concentration camp by any other name would smell as putrid.

So, We’re a year into the “New Normal” (a/k/a The Totalitarianism Rebrand) and things are still looking ….… well, pretty totalitarian. Most of Western Europe is still in “lockdown,” or “under curfew,” or in some [more…]

One of my heroes, Judas Was Paid, suggested I make a camper van. So, obedient old girl that I am, I made a camper van. But because, like most on here, I am nasty, twisted [more…]

In his latest book (“The Body – a Guide for Occupants”) Bill Bryson highlights the limitations on what money can buy. He points out, for example, that America spends more per capita on healthcare than [more…]