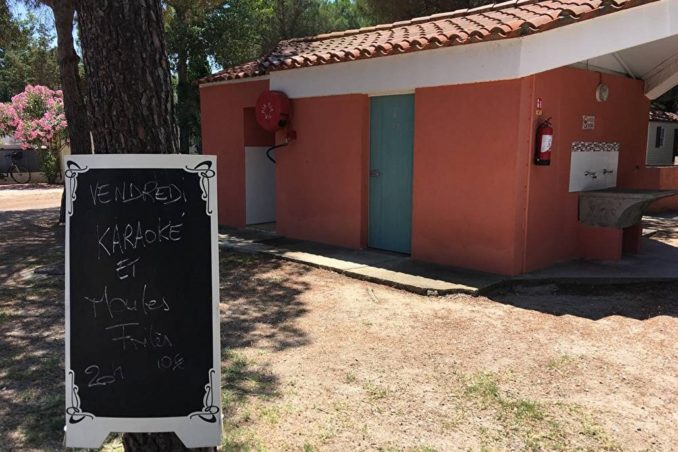 Those of you who may have stumbled across parts 1 & 2 of my confessions will remember that during the summer months of 1980 and 81 I had been despatched by the Diplomatic Service to France on a mission of vital national importance. My cover – which was never blown – was that I was just a humble courier on a campsite near the coast north of Perpignan.

Year 2 of my secret mission

There had been no formal contact with the Diplomatic Service during the previous year, but I decided to return anyway, liaising directly with the camping company.

Again, I had issued no invitations to friends as was the case back then, just mentioning casually to a few people that they were welcome to drop in if they happened to be in south-west France. Of course no one announced in advance that they were coming either. To this day I don’t understand how such a tribe of spongers /friends all turned up during that second summer, but suffice to say it turned into a mini Klondike à la française (obviously without the snow, the rampant profiteering and casual loss of life) and a rather enjoyable one too…..

First to arrive was the now Mrs H. I knew about her arrival: as this was the 1980’s we had been corresponding by good old-fashioned letters. She turned up knackered having spent the best part of two days driving down from Germany. She was particularly delighted that we managed to have a whole three hours together before a couple of old chums from the UK appeared on the campsite out of the blue.

I then did what any normal red-blooded male would do. I proceeded to get hog-whimpering drunk with my mates on duty-free Pernod. Not surprisingly this was not much appreciated by the then Ms. B. Luckily she managed to peer through the aniseed-shaped cloud around me and see the charming man inside. Forty years on, she is not keen on pastis for some reason, but she still rather likes the man who has retained the charm (and modesty) of his youth.

Anyway, the flood gates had opened and from then on there was a steady stream of mates / scroungers looking for a free holiday. We probably averaged 12 as a hard core group but peaked one week at over 15. I managed to keep people in the more remote mobile homes and as this was a) in a pre social media era and b) no one ever visited from head office, I was able to get away with providing free holidays for the masses.

I had a number of friend groups (and there were also had friends of friends) so a lot of people didn’t know each other. The sunshine and complete absence of stress obviously had a positive impact and everyone got on famously, united in being able to take the mickey out of the one poor schmuck who had to do some work every day.

It was also interesting to see the group dynamics: who was happy to be proactive and shift their weight and who had to be bluntly told what to do. Fortunately, wife-to-be and best mate turned out to be rather good at organising the assembled hordes and producing great meals too.

Everyone chipped into a kitty, though it was only some years later that Mrs H pointed out that the relatively abstemious ladies had been subsidising the thirsty male drinkers all summer.

The main weekly shop was to a Carrefour some distance away and each week WTB and BM would return with a car full of food and booze. One week they proudly returned boasting about the fantastic deal they had got on beer. They had indeed bought in bulk, but there was a slight problem. I then had to do what I now know to be a performance review: “Look I love you both very much, though obviously in very different ways. You both speak excellent French, but unfortunately you have a small gap in your vocabulary. All those bottles you have purchased contain what the french call panaché and what we call shandy….”.

When most people finished their holidays they usually left behind the half-used cheaper ingredients. After a few weeks I had a collection of oils, mustards and jams to rival that of the campsite shop. Occasionally someone would leave something more exciting like a camembert or a packet of ham, but it was usually thin pickings. I was therefore delighted to discover one Saturday that a couple had managed to forget a large case of wine as well as a box filled with various artisanal liqueurs. Given that they had been en route for some hours by the time the cases had been discovered, I thought it unlikely they would be coming back for them. I therefore hauled my booty back to our base like a marauding Viking chief returning from a successful raiding mission to the North East of England.

“Tonight my friends we will drink copious draughts and sing our Viking victorious warrior songs! Or possibly some Abba medleys! Huzzah!”

And we did. Every last bottle was drained and all the problems of the world were resolved.

At 8.30 the following morning, I was awoken by someone from campsite reception banging on the caravan door and bellowing “Jacques, there’s someone on the phone for you.”

Now, even with my exceptionally fuzzy head I thought this was a little strange. No one had ever called me before and given this was the 1980’s I don’t think I had even given my parents an emergency contact number….

I picked up the phone and was greeted with a “Air hellair”.

Had someone given Terry-Thomas my phone number?

Apparently not. It was a rather posh man who lived near Perpignan and apparently he had some friends who had been staying on the campsite.

“They called me last night to say they had left some boxes of wine and stickies in one of your caravans and that I should come and collect them this morning.”

Ah. Yes. Hmmm. Even through my rather bleary eyes, I could see a slight problem with his plan of action.

Thinking rather quickly for a man who had not yet had so much as a sniff of his morning coffee, I said: “ Well, you can if you want to, but there really isn’t much here….a couple of bottles of vin de table and one raspberry liqueur”.

“Eau, in that case, I won’t bother. Sorry to have troubled you. Bye”.

I stood and stared at the phone. What just happened there?

Slightly stunned, I returned to base. The Viking chief had bagged another stunning victory. Perhaps I would get to lie for my country yet….

The doors on the mobile homes had two settings: open and “apparently” locked. They had keys, but a combination of rather lax operating tolerances in the Hull factory where they were made and the heat of the Mediterranean sun meant that even locked doors could be opened with a determined tug.

This was obviously handy when customers managed to lock themselves out and I could demonstrate my advanced door-opening skills to get them back in.

However there was also a downside. The caravans all looked quite similar, especially after a few beers.

One of our happy band was a large ginger fellow with a healthy sun-burn and an even healthier appetite, especially after a few beers.

I was accosted one morning by a small Belgian customer who complained that he had woken in the middle of the night to find, bathed in the glow of his fridge light, what looked like an orang-utan, foraging for comestibles. I then had to introduce a new policy for my free-loading chums: no late-night door wrenching, even if you are pissed and peckish.

With lots of people and just one car, our horizons were not vast. The campsite had no pool (early 1980’s – rationing had just ended) and so the best we had was the beach half a mile away. This was an old-fashioned beach: it had sand and some sea. Nothing else. Not even shells.

We did a bit of swimming and some sun-bathing and generally chilled. Fine, but all rather low key.

One day however, a French bloke I vaguely knew from the campsite turned up with his small boat with outboard motor. Would the four of us who happened to be on the beach fancy a small trip on the open sea? Well, that sounded just the ticket for a hot summer’s day.

We cruised along the coast and back for 45 minutes, then stopped a few hundred metres off shore, with the engine idling. You could go for a swim if you want, suggested our new-found French chum. Girl-friend declined, opting to stay on the boat with our froggy friend, but I and the two others decided a brief swim might be rather refreshing. Not being the strongest swimmer in the world, I generally prefer to paddle where I can touch the ground. But, what the hell, a few minutes in the open sea. What could possibly go wrong?

The answer to what I thought was a rhetorical question was swift. Thinking that one person in the boat was more than enough, our Frenchman had launched himself from the boat in a massive dive which sent the boat skidding away in the opposite direction. He then added to his bravura performance by coming up from his dive and immediately getting cramp in his leg. Fortunately one of us was a decent swimmer and he moved into life-saving mode.

Fortunately the answer to this rhetorical question was “no”.

Girl-friend gradually mastered the intricacies of boat navigation and we hauled and pushed the useless boat-owner back on board his vessel.

Walking back to the campsite we did reflect that there is a surprisingly fine line between all returning home safely for dinner and being a tragic holiday tale in the local paper. There were no further boat trips that summer.

In Blade Runner, Rutger Hauer may well have seen attack ships on fire off the shoulder of Orion and watched C-beams glitter in the dark near the Tannhäuser Gate.

But there was one thing he never saw. How a bunch of 21 year olds storming onto an outdoor dance floor on a campsite in Southern France to perform Nightboat to Cairo can get dozens of middle-aged people dancing their little hearts out too.

On a previous trip across the English Channel many years ago, I was returning to England via Calais to Dover on the ferry as a foot passenger. I was sat on deck minding my own [more…]

A Postcard From a Mediterranean Cruise – Part Three

In Praise of The Bongo

I have mentioned in previous articles that the exploits I was describing were usually carried out courtesy of my trusty Mazda Bongo. On reflection, it seems that this amazing vehicle deserves more than a “bit [more…]