Idly browsing the Interweb the other day, I came across this BBC article on the terrible outlook for the ice sheet around the North Pole:

Well worth a few moments of your time – it appears that within 5-6 years, the northern polar waters could be ice-free in the summer. Indeed, the scientist quoted says that previous studies have underestimated the melting. I’m convinced! There’s just one thing that’s bothering me, as Columbo used to say. The report is from 2007 and the ice-free year is predicted to be 2013: 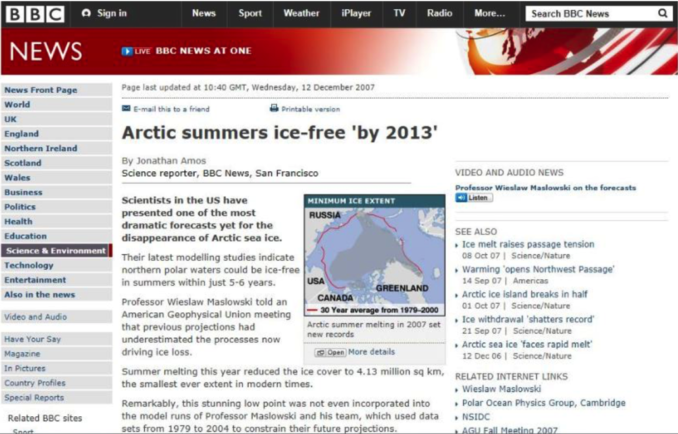 This is a project called the Multidisciplinary Drifting Observatory for the Study of Arctic Climate (or MOSAiC for short). It’s a year-long expedition, involving the Research Vessel Polarstern. They plan to get themselves frozen into the ice and stay there for a year. The 600 scientists on the trip will be supported by several other ships including the Akademik Federov, an ice-breaker.

Let me say that again. In 2019, six years after the date when Professor Maslowski predicted that the Arctic would be ice-free, he is back Up North and he’s taking an ice-breaker.

Has the man no sense of irony?

The shade of Victor Meldrew comes unbidden to mind, declaiming, ‘I don’t belieeeeeeeeeeve it!’

Just to put ice on the cake (sorry) it has been reported that the icebreaker supply ship is having trouble reaching the Polarstern because the Arctic ice is too thick, at about 5 feet. It appears that the supply ship is using too much fuel breaking the non-existent ice and if it gets to the Polarstern it won’t have enough to get back.

Arctic Expedition: Problems with crew exchange.
(in German; your browser may translate)

I thought this was very funny, and it made me ask:

– How could he have got it so spectacularly wrong?

– How did Professor Maslowski get funding for his current venture?

– Should the failed prediction affect how we respond to his, and other, climate predictions?

– Indeed, what, apart from the date and elapse of time, is different between the 2007 prediction and current, equally doom-laden, climate apocalypse forecasts?

That virus Well.  There seems so much to question, from why Professor Ferguson was seen as sufficiently credible to shut the country down, to the published stats on numbers of people catching it and the [more…]

Emmet Dalton and the raid on Mountjoy Prison

This is a story about one of the rebels against British rule over Ireland and about one incident in that rebellion in the early 20th century. Emmet Dalton was born in the United States in [more…]

The Virus Circle – An Object Lesson on Socialist Economics

It’s not quite like having to start the economy from scratch, but this lockdown-induced recession warrants some detached assessment. We are aware that viable businesses have been forced to close their doors – or keep [more…]