Hidden away in the heart of France’s Drôme region about 50km south of Lyon is a little known yet magnificently eccentric example of naïve architecture that is well worth a detour or, in my opinion at least, a special journey. Situated at the crossroads of the D51 and the D538, Hauterives is only a short drive off the A7/E15 Autoroute from exit 12 (southbound) or exit 13 (northbound) and makes an fine overnight stop when en-route to or from Provence or the Côte d’Azur. We stayed at the excellent ACSI listed ‘Flower Camping Le Château’ *** campsite which is only a short stroll from both the village and its cemetery and would make a good base for exploring the region.

Unfortunately, on the day of our visit the weather was overcast and drizzly but while the colours in the pictures are a little flat the absence of deep shadows does allow more detail to be seen.

Born in April 1836 in the nearby village of Charmes-sur-l’Herbasse to a peasant family, Ferdinand Cheval left school at the age of 13 and after working as an apprentice baker eventually became a rural postman or ‘facteur’ and this was to be his occupation until his retirement aged 60 in 1896. In 1878, through his second marriage, Cheval came into the possession of a dowry sufficient to enable the purchase of the house in Hauterives in the garden of which his amazing creation now stands.

During his daily 30km (18 mile) trudge on foot delivering the mail, Cheval entertained and educated himself by reading illustrated magazines such as ‘La Revue Illustrée’ and ‘Le Magasin Pittoresque’ which together with the new and increasingly popular picture postcards  that he delivered stimulated his imagination. In a letter to Departmental Archivist André Lacroix written in 1897, (see below) Cheval described how while out on his round one day aged 43, he had stumbled on a ‘bizarre’ stone which prompted him to look for other similar ones on his travels. At first he carried his collection home in his pockets or mailbag but, as his obsession grew, he began to push a wheelbarrow in which to transport his daily collection.

Back home, Cheval at first used these stones to build ponds and waterfalls in his garden and so pleased was he with his creations that his ambition grew to build himself an Egyptian-styled tomb in which he planned eventually to be buried.

A lifetime of single-minded commitment and continuous labour

What I find amazing in our current age of short attention spans is Cheval’s total, obsessive commitment to his task. Singlehandedly and often working late into the night by the light of an oil lamp, the postman laboured continuously for the following 33 years spending a total of 93,000 hours constructing what would come to be known as the ‘Ideal Palace’ which he completed in 1912.

Impressions of the Ideal Palace

While neither Mrs Pudding nor I make any pretence of being artistically knowledgeable or culturally sensitive we were nevertheless very much impressed by the imagination, dedication and constructional skills demonstrated by this exponent of ‘l’Art Brut’ despite his lack of formal education. It goes to show what ‘ordinary’ people can achieve through hard work given commitment and determination and as such it is very inspirational.

Rather than try to describe Cheval’s work I will let the pictures speak for themselves. 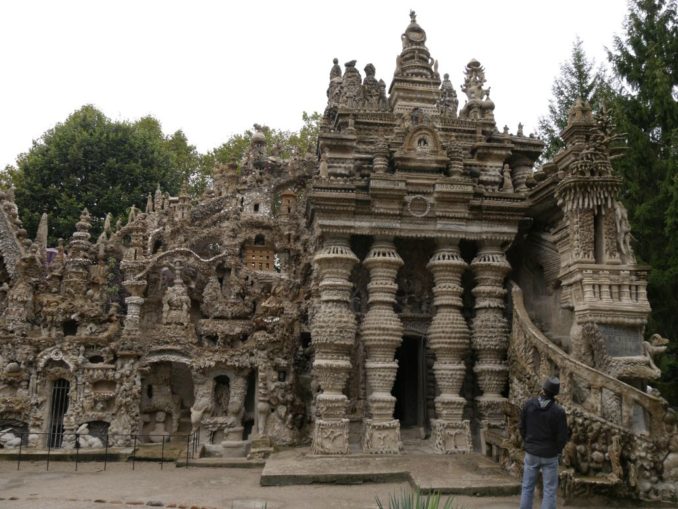 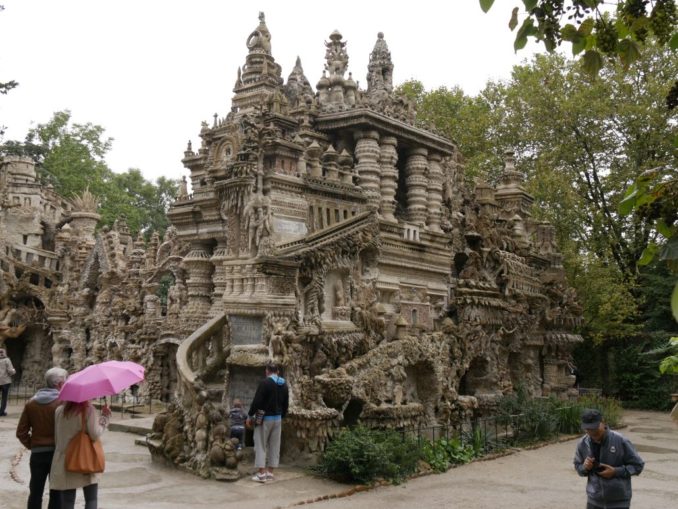 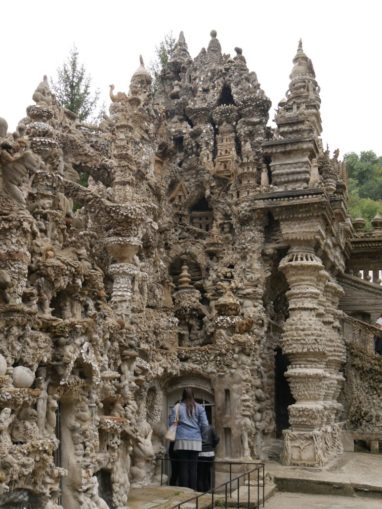 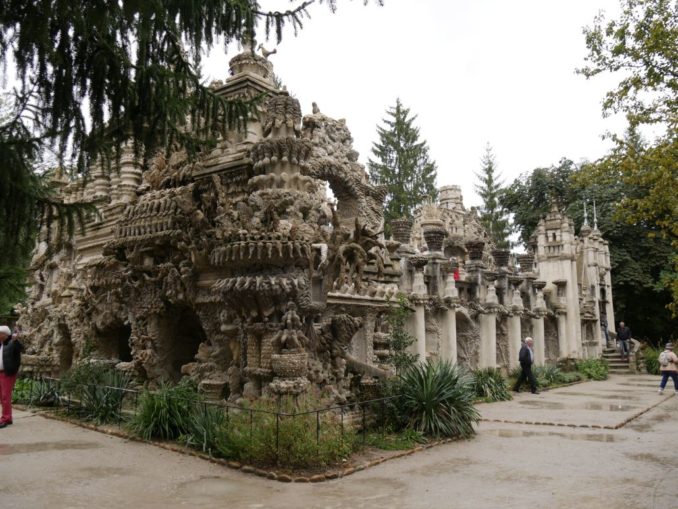 “One day in April 1879, I was doing my rounds as a rural postman a quarter of a league before reaching Tersanne. I was walking quickly, when my foot caught something that sent me tumbling a few metres away. I wanted to know what had caused it. I was very surprised to see that I had brought a stone out of the earth. It was of such a bizarre and yet picturesque shape that I looked around me. I saw that it was not alone. I took it and wrapped it in my handkerchief and carefully took it away with me, promising myself to take advantage of the free time that my rounds would leave me to set in a store of them.

From then on, I had no rest day or night. I set out to find some more. Sometimes I did 5 or 6 kilometres and when I was loaded up I carried them on my back. I began to dig a pool in which I started to sculpt different species of animal with cement. Then I started to make a waterfall with my stones. It took me two years to build. Once it was finished, I was amazed with my work. Criticized by the locals, but encouraged by foreign visitors, I did not lose heart. I had discovered other stones, each more beautiful than the other, in Saint-Martin-d’Août, in Treigneux, and in Saint-Germain. They were like little round balls. I set to work.

I started a cave and a second waterfall so that my cave was located between the two. This is what forms the whole middle part of the monument. It took me another three years to complete. Still more delighted with my work, the idea then came to me that with my little round balls that I had found in Saint-Germain, Treigneux, and Saint-Martin-d’Août I could make myself an Egyptian tomb whose style would be unique in the world, and be buried in the rock just like the pharaohs.

I started digging into the earth and I formed a kind of rock, and in this rock I dug coffins. These coffins are covered with tiles that you can remove at will, themselves closed off by a stone door and an iron one.

On this underground rock, I built the monument that is twelve feet wide and fifteen feet long. The monument is supported by eight walls made of stones that have the most picturesque shape. The facades of the east and north are each supported by four columns that bear the serrations of the monument. In the middle, a beautiful stone wreath made with small round balls.

Above, the Virgin Mary’s cave, with the four Evangelists, two on each side. A cross with angels holding crowns, and pilgrims. Further up, a second crown with a mortuary urn, and above the urn, a little Genie. This monument is over 30 feet high. You reach the top via a spiral staircase. I worked night and day for another seven years to finish it. I carried my stones on my back, sometimes 15 kilometres, mostly at night.

Still to fill my spare time and for the symmetry of the monument, I wanted to add a Hindu Temple whose interior is a real cave, and this cave forms several small ones and in these small caves I placed the fossils I had found in the earth. The entrance is guarded by a group of animals such as: a bear, a boa, a crocodile, a lion, an elephant and other animals of this kind always found in the earth, and also tree trunks. On the other side, three giants and two mummies, all Egyptian, and above there are two prickly pears, palms, olives and an aloe. You reach the top of the tower by a spiral staircase. At the entrance of the staircase are four barbaresque columns. I took another four years to build this Hindu Temple.

Still with the same energy and perseverance, two years ago I started a gallery on the side where the sun sets with hecatombs on each side measuring 12 square feet that communicate either with the Hindu Temple or with the Tomb. Above the hecatombs and the gallery is a very large terrace, 22 metres long. You also reach it via stairs, the only purpose of which is so that visitors can get a view of the whole monument at their leisure.

Tourists came in large numbers this year, far more than in previous years and all left marvelling at my monument; they above all admire the hard work and perseverance that I spent on this wonderful work, to be called, I hope: Alone in the World.

I’ve been working for eighteen years and I still need two years to complete the interior and exterior of my dream that will have lasted for 20 years. I started this gigantic work at the age of 43 years. I have not served the government as a soldier but I served nearly thirty years as a postman.

As I must give a name to my work, I would ask you yourself to give it an overall or detailed name as you think best. You are better able to find it than anyone. I would like to repeat that I will pay for the costs incurred by correspondence or similar. Please let me know what they are. It was too kind of you to agree to send me a short biography. I will remain sincerely appreciative of all the trouble you have taken for me. The Tomb of Silence and Rest Without End

Sadly for Cheval, French law did not permit burial on private land so, undaunted, he bought a plot in the local cemetery where he then spent a further eight years building a similarly styled mausoleum which he called ‘The Tomb of Silence and Rest Without End.’ Facteur Cheval was interred there upon his death aged 88 in August 1924.

It wasn’t until shortly before his death that Cheval and his creations began to receive recognition from artistic luminaries including André Breton and Pablo Picasso then in 1969 and going against the advice of his civil servants, the French Minister of Culture André Malraux declared the Palais Idéal to be a cultural landmark and gave it official protection.

The Ideal Palace which receives more than 150,000 visitors per year is open every day except for Christmas Day, New Year’s Eve and a few days in January. Admission is 8€ including entry to a museum that tells the fascinating story of Cheval’s life with examples of his meticulous draughtsmanship.

If you are in the area and are looking for somewhere for a day out then look no further. I promise you will not be disappointed.

The French Are Revolting

On Monday, July 12th, Oberfuerher E. Minus MacRunt’s inveterate psychopathy morphed into full blown psychosis. He had his lackeys dig out the 1942 ordinance below, whited out the word “Jew”, replaced it with “Unvaksinated Vurmin”, [more…]

Monday Good morning, another week starts and despite it being bright it’s getting cooler, autumn is definitely setting in. Very quiet here this morning, almost like a Sunday. Bozzie went off with Liz Truss to [more…]

As we reach the end of our 1952 Nostalgia Album adventure to Gibraltar and back, my father and his parents remain at the top of the Eiffel Tower gazing at the more distant of the [more…]