“Inflationism, however, is not an isolated phenomenon. It is only one piece in the total framework of politico-economic and socio-philosophical ideas of our time. Just as the sound money policy of gold standard advocates went hand in hand with liberalism, free trade, capitalism and peace, so is inflationism part and parcel of imperialism, militarism, protectionism, statism and socialism.”

Ludwig von Mises, On the Manipulation of Money and Credit, p. 48

Claudio Grass (CG): We have all seen the striking photos of basic necessities and groceries next to the mountains of cash needed to purchase them and the devastating effects of hyperinflation in the economy are well documented. A rise in physical gold hoarding has also been documented among the citizens. Was gold always part of the culture or did it just recently become a necessity, as the Bolívar collapsed? 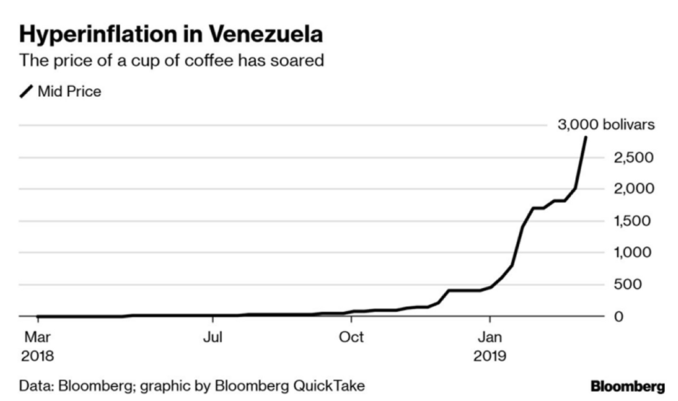 José Niño (JN):  Venezuela had a gold standard and didn’t get into the central banking game until the late 1930s. In fact, the Bolívar was one of Latin America’s most stable currencies for quite a while, up until the 1980s. Since then, it’s been devalued and it has now become worthless due to the current hyperinflation.

Gold possession has been on the rise for those in the upper middle class and higher, especially for those with international connections. We’ve also seen the emergence of cryptocurrencies like Bitcoin become somewhat popular due to the hyperinflationary crisis and Venezuela possessing a surprisingly high number of tech savvy young professionals.

However, a lot of people go straight to dollars, because of how powerful the dollar remains relative to the Bolívar and the fact that so much of the Venezuelan economy, economic crisis notwithstanding, still depends on U.S. commerce. Venezuela is effectively going through a de facto dollarization in the black market.

CG: Staying on the topic of gold, the gold reserves of the Venezuelan central bank have been dropping steadily, with more massive sales earlier this year despite the sanctions. Meanwhile, we saw the Bank of England block the withdrawal of Venezuela’s gold holdings, as Nicolas Maduro tried to repatriate about $550 million in gold from the bank. Given the multiple pressure points suffocating the nation’s economy, what do you think of its central bank’s capacity to provide any relief?

JN: Monetary policy in Venezuela has been quite loose for the past three decades. The government bought a majority stake in its Central Bank during the 1970s, so it has been effectively politicized. I personally don’t see any changes coming internally. With how much Venezuela has floated into Russia’s and China’s geopolitical orbits, it’s probably going to receive certain “pragmatic” pieces of advice from these actors to reform its economy and at least give it some breathing room in the short-term. In summary, the future looks bleak for Venezuela.

CG: The current troubles of Venezuela and the daily struggle of its people might be distressing to watch and absolutely tragic, but it can be argued that they were largely predictable, as yet another failure of socialism. Is that a fair assessment or might it be that “this wasn’t real socialism”?

JN: Venezuela might not be as hardcore socialist as say Cuba, North Korea, and the Soviet Union, but it does feature many of the planks of the Communist Manifesto. Its controls, expropriations, and central banking policies have been utterly destructive—which are all features of oligarchical collectivist economic systems. Venezuela is definitely the current poster child of interventionist failure.

CG: Given the recent rise in popularity of hard-left policies and economic proposals in Europe and also in the US, from the Green New Deal to Modern Monetary Theory applications, do you think there are lessons to be learned or warnings to be heeded from Venezuela’s case?

JN: I think that the old school garrison state model of socialism largely died with the collapse of the Soviet Union. You have a few holdouts like Cuba, North Korea, and Venezuela. On the other hand, the West is mostly threatened by globalism and the managerial state. These policies include Third World mass migration, the politicization of all facets of civic society, hate speech laws, destruction of freedom of association, Big Tech thought-policing, and mass surveillance.

This kind of social engineering will obviously have central banking and bureaucracy buttressing it. These policies, in tandem with the welfare state, will gradually neuter non-state institutions like the church and the family unit, thus leaving powerful entities like politically-collected corporations and the government in a strong position to lord over our lives. Central banking will definitely be playing a role in fomenting high time preference consumption activities in the midst of all this.

But this whole process is definitively under a boiling frog approach. It’s not like the accelerationist industry expropriations we’ve seen in countries like Cuba or Venezuela. Demographics (aging population and mass migration drawn by welfare magnets) will likely collapse the U.S. and the rest of the West for that matter.

I think this process will definitely be drawn out and it’s best that we recognize the threats we face and confront them right off the bat. Failure to act in time could prove fatal in the long term.

The Necessary and Inevitable Recession to Come

Perhaps the most destructive premise of modern, mainstream economics is that a central bank-induced monetary/credit expansion can cause an economy to grow without adverse consequences. Let’s be perfectly clear from the start…this policy has been [more…]

Why the Swiss Voted for More Gun Control

Listen to the Audio Mises Wire version of this article. On May 19, 2019, Swiss voters approved a new set of gun control restrictions. This newly-approved gun control measure would put Switzerland’s gun control laws in line with European Union standards. [more…]

The Evolution Of The Bank Run

There are numerous and wide-ranging reasons why someone may choose to invest in physical precious metals. A deep understanding of monetary history provides plenty of solid arguments, and so do the mounting geopolitical risks, the [more…]