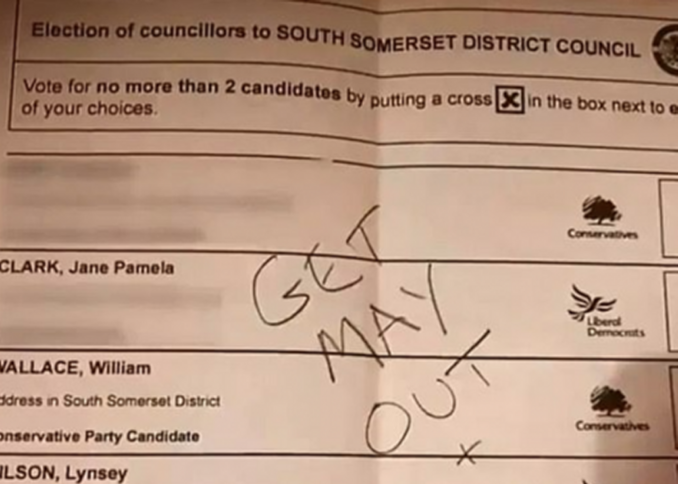 After the article about a Polling Station, it seems only natural to check out what goes on at the count. Again the Electoral Commission have produced a PDF or three to help us on our way.

To begin with there is lots of advice for the Returning Officer about planning the count and the people he has to be helpful to. That includes the media. Having set up the counting station the actual counting consists of three steps.

The Returning Officer must have a plan on how he intends to do the count. This plan must be explained to the various people entitled to be at the count and these people should be regularly informed how the count is progressing.

Who can be present

The names of all these apart from Electoral Commission representatives and Accredited Observers should be given to the security staff so they ensure only these people are in the counting area. The others have ID they can show to gain admittance.

These people do not have to arrive at a certain time and must be allowed to come and go as they desire.

The media should be briefed on what behaviour is expected from them and there should be a PR team on hand to deal with any queries they may have.

Templates should be prepared of all the documents that will be completed during the verification and counting stages, these will provide a clear audit trail. Essentially these are counts of the various documents , boxes and envelopes that are involved.

The ballot boxes containing previously received postal votes are also delivered to the counting centre. These are handled in a similar way as boxes from the polling stations.

It is at this point that the seals on the boxes are broken allowing the agents to check any seals that were attached by agents in the polling stations. The papers are now carefully tipped out of the box and the papers are counted and checked again to ensure they match the totals provided by the presiding officer. They also have to reconcile the unused ballot paper count. There are also spoilt ballot papers at this stage but these are where a voter made a mistake when voting and was issued with another ballot paper, the original being spoilt and has cancelled written on it. There are also tendered votes, these are where a voter was marked down as a postal voter but denied he/she had asked for a postal vote; they are given a tendered ballot paper to vote with.

Verification is not complete until all the numbers agree, once complete that polling station’s ballots can be passed to the counting team.

The process must be transparent and agents and observers should have a full view of proceedings.

During the count ballot papers must be kept face up at all times. This prevents the number on the back being seen (that could be used to identify the voter ! their own words). Counting assistants should sort the ballot papers into votes for each candidate, any doubtful ballot papers should be put to one side for adjudication. Each candidates votes should be counted and placed into bundles of a predetermined number of 20 , 25 , 50 or 100. A slip bearing the candidate’s name and the number in the bundle should be attached to the front. The bundles should then be recounted by another assistant to ensure accuracy.

Before removing any bundles from the counting staff, supervisors should flick through the bundles to ensure all the votes in the bundle are marked in the same way.

There is a whole PDF that deals with this subject. I guess we can all figure out there should only be one X clearly in one box on a ballot paper. Firstly it has to be an official ballot paper and if there is anything other than one X in one box it is doubtful. The returning officer’s decision on this is final but an agent can object to this. The ballot paper is marked rejected and if an agent objects, that is also noted on the paper. Observers can watch this but may not object. Where rejections have been objected to, it can only be challenged by an election petition.

Essentially, if the returning officer is satisfied that the intention of the voter is clear, a vote may be accepted provided
the intention was clear.

Now all the bundles can be counted and again the totals must match the number of papers delivered to the counting centre. Once the numbers match, the returning officer can consult with the candidates and agents on the provisional result. Once all are agreed they consult on the announcement of the result. The candidates and agents are entitled to request a recount. The returning officer must allow the candidates time to digest and accept the result. Any request for a recount must be considered but can be refused if it is considered to be unreasonable.

If two or more leading candidates have the same number of votes the returning officer must decide between the candidates by lot. The lot equates to one additional vote. You can be equal 2nd but not equal first.

At last the result can be declared, a process we will all be familiar with.

There must be another PDF about handling postal votes, the guidelines I was reading are not clear enough to be able to handle them fully. The voter can post his vote to the local authority or he, or a proxy, can take the sealed envelope to presumably any polling station. The presiding officer just puts them in an envelope and sends them to the counting centre. The polling station does not do anything other than record the number of postal votes they have received.

At the count there will be postal votes coming from the council offices as well as from multiple polling stations. I believe they start counting them before the 10pm deadline, who remembers Labour’s twitter tsar(ina) tweeting inappropriately during the day about the postal vote count.

I will hunt down the offending guidelines and perhaps do another article on postal voting, perhaps the weakest link in democratic voting.

It was not in the guidelines but the story is that the material must be stored for a year and a day in case there are any allegations of irregularity. That in itself is a joke with the goings on in certain ethnic areas. It is also alleged that the security people get access to this place and can extract the ballot papers, remember they have been bundled by candidate, and then match them up with the electoral list that contains the ballot paper reference. It was supposedly done to get the names of communist voters, these days it is more likely to be done to get the names of far-right voters.

We reach March 1942 and again, there is not much happening on the ground. It all seems to have ground to a halt and once more Churchill is not amused. The Royal Navy is still [more…]

August 1941 was extraordinarily quiet in the theatres we are concentrating on. This month it is only news from Libya and precious little of it there is. But things were happening in Italy. In Tobruk [more…]

A Tramp’s Take on Workers’ Rights

One of the tramp’s perpetual complaints, of which there are many not a few, is that the Tories will do away with his beloved Workers’ Rights as soon as we step away from the EU. [more…]