Whilst working in Essex I’d had my fair share of treating celebrities and the famous. There was an ex Milky Bar kid, then in his 30’s with dreadful teeth but still living the dream with his John Lennon glasses, the father of one of the blokes from Depeche Mode and most notably Gary Wilmot’s chil-dren’s nanny, so I was used to, and not intimidated by, treating prestigious patients. Having Gadaffi standing in front of me was however a slight step up.

I’d mainly worked in the NHS and so Gadaffi’s surgery was the plushest I’d worked in and his dental chair would not have looked out of place on the Starship Enterprise.
It would have been nice to have come along to orientate myself to see how all the equipment worked and what materials were available but it wasn’t to be so we were straight into it.
At this initial visit Penfold acted as an interpreter which was odd as Gadaffi’s English was fine. At subsequent visits there was just me, Gadaffi, Karen or Suzanne and the Serbian girl who’s function seemed to be to fetch Penfold if needed or when we’d finished.

I’m glad Gadaffi could speak to me in English as my Linguaphone cassettes lay hardly touched in my apartment, replaced in my Walkman by John Lee Hooker and Elmore James. I’d had a go at learning some Arabic but being a poor linguist, cunning or otherwise, I was finding it difficult.

I’d travelled around South East Asia and had gotten by with the usual ‘speak slowly and shout technique’ so had decided to learn on the job so to speak. I had learnt words and phrases which I thought would come in useful. Counting from one to eight, (dentists only need to get up to eight), top, bottom, pain, where?, etc and ‘please don’t attach those electrodes to my testicles’. Certain Linguaphone Arabic phrases such as ‘ where can I buy a builder’s bucket and some fairy lights?’ I could do without.

After finding out from Penfold if there was anything medical that I needed to know about Gadaffi, (apparently not), we had the situation of him sitting in an unfamiliar chair in front of me, all eyes trained on us but me not having a clue which of the multitude of buttons to push.
I went for a green one as I’m smart, and fortunately, instead of propelling him up to the ceiling, the chair started laying back slowly. In next to no time I had Gadaffi’s head between my thighs.

This initial examination was to see what we had to work with and what needed doing. He had a nice tidy mouth and no halitosis that I recall, (JWP), but I was hiding behind a mask. Maybe the Serbian girl had been more up close and personal but enquiring about a dictator’s sex life 15 minutes after you’ve met him might appear a bit forward.
He had a broken filling on an upper premolar and a bridge on the lower left that was failing and so all in all it seemed quite straight forward to get him dentally fit. A couple of visits in the UK.

I was in Libya.

After we worked out a treatment plan Gadaffi and Penfold left and Karen and I started looking round the surgery in cupboards and drawers to see what equipment and materials were available.
I’d never seen so much stuff.

At the time I was there, Libya had strained relations with most of the Western world. The murder of Yvonne Fletcher, the Berlin disco bombings, the Gulf of Sidre incident, Gadaffi’s support of the IRA and of course Lockerbie amongst many other things all made trade and travel a bit haphazard.To get to Libya I’d had to fly to Switzerland and hang around for a bit to get a Lib Arab ‘plane to Tripoli.

(Lib Arab ‘planes apparently had problems getting serviced, which is why at Tripoli airport when I flew in there was a passenger jet abandoned by the side of the terminal. It had crashed into the building and was waiting for a time when spares could be brought in. In the meantime it sat there forlornly as a reminder that you should never get on a Lib Arab ‘plane unless there is absolutely no alternative. And then preferably drunk. It was still there when I left. I don’t scare easily but flying on Lib Arab used to put the shits up me.)

Anyway, as a consequence of trade problems my clinic used to run short of certain materials and consumables such as dental burs and temporary crowns. Trying to perform decent dentistry with blunt burs is a pain in the arse and here we were looking at enough burs and other things to last a lifetime, so when Miss Serbia went off to get Penfold I stuffed a few packets in my pockets. Look-ing back, I must have been out of my mind but at the time it seemed perfectly sensible.
After another trip in a shit car with an armed arab we got back to the clinic where we checked out our booty and decided this was ‘a good thing’ which needed to be repeated at future visits.

So it was, but I didn’t stop at burs.

Alcohol was readily available which was a good thing as, apart from partying, there was not a great deal of things to do in the evenings. We all had TVs in our apartments but a night in, in front of the telly was a bit of a non starter. Occasionally, if lucky, the TV could pick up a bit of RAI the Italian Broadcaster but this was covered in interference even on a good day. So the main thing on the box was Libyan TV. This would make the SCBBC seem a paragon of impartiality.

The main programmes were about my new best friend and patient, The Colonel. Here he was giv-ing a speech, there he was waving his little Green Book in the air. Here he was in his tent meeting famous people, there he was inspecting his Great Man-Made River project. ( This was something to shout about though, as at the time it was the greatest engineering feat on the planet and I might come back to it later.) But other than watching to make sure he didn’t suddenly clutch his mouth in pain this wasn’t riveting TV.

There were two programmes worth watching out for though. One was MacGyver. I’d never seen this before but I could while away half an hour watching our hero escape from a locked room in badly dubbed Arabic. Why the Libyans liked MacGyver is anybody’s guess.
The other programme was the Barbapapas. As I remember it, there didn’t seem to be any dialogue other than them wandering about on their adventures just saying ‘Alhamdulillah’ at each other. I was probably wasted. 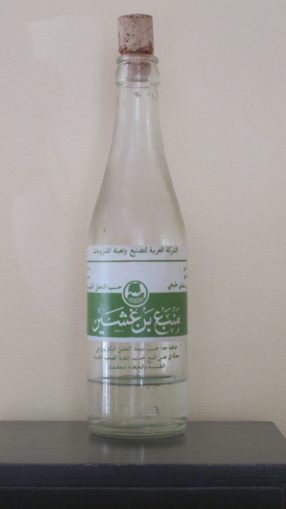 So drinking took up a lot of time. As previously mentioned Sean and I brewed beer, mainly using tins of kid’s malt extract. Some we drank, some we took to parties as gifts and some we sold if there was any left over. It didn’t taste great but it was perfectly drinkable probably being slightly more palatable than Fosters. It did the job.
Wine you couldn’t bring into the country but strangely you could bring in wine kits, so when friends went back home for a holiday they brought them back. Their return was eagerly awaited.
The whiskey and occasional gin and vodka I was given were the only ‘real’ alcohol around so we drank it sparingly and saved it for special occasions, such as finishing work for the afternoon.

The main staple though was Flash.
My friends Bill and George had a still at their villa. I can’t remember how much they distilled but a large part of the Tripoli ex-pat community were dependent on them.

Bill was a good friend of mine, a Scot and ex Navy who had set up a successful company working in the oil industry. He liked the ladies and was often seen at parties in a happy state wearing his kilt with his cock on show. In fact the only time I can recall seeing him in his kilt and in a state of mod-esty is when he played his pipes at the Tripoli Remembrance Service, and that includes his wed-ding.

Flash is the Libyan equivalent of Sadiki, is pretty lethal and everybody drank it. Flash with ‘coke’, flash with ‘7-up’, flash with orange. Usually cut 1:5 or 1:3, I could be a bit more generous as we got ours at a good price as we knew Bill well. We drank a lot of it.

When I left Libya I smuggled some flash in a Libyan water bottle which still, ( pun intended), sits, nearly empty, in a cupboard. Occasionally I’ll take it out, not to drink but to set fire to a teaspoon full and watch the blue flame burn until there is no liquid left. It is a good reminder of the strength of neat alcohol flash and one of the reasons that I eventually had to leave Libya.

Part 4 maybe: Life at the Clinic and ‘Oops’ at the Barracks.

January had finished with the Allies on the back foot in Libya, the Axis was advancing. It was all going pear shaped again. Although Tobruk had been relieved, the Axis armour hadn’t been destroyed, merely [more…]

The inspiration for this article was the report that so many people have opted out rHNS’s data sharing scam that they have had to postpone it. The associated throwaway comment that the data would only [more…]

Monday A good Monday morning to you all. That was a quick weekend, it seems like only yesterday I was dictating my last diary entry. As usual it was breakfast with the gang, me keeping [more…]