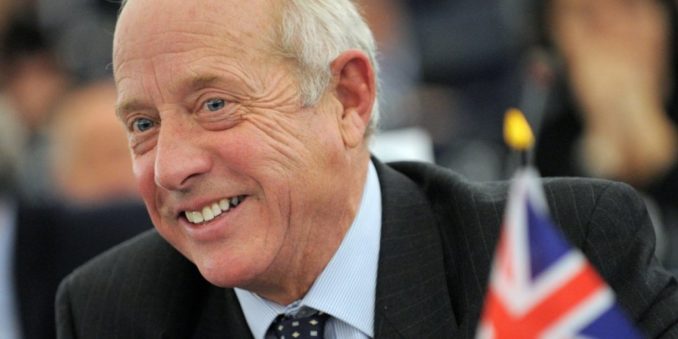 Claudio Grass (CG): With everything that’s been going on, it could be argued that very few of Liz Truss’s predecessors had worse luck in their first month in office. The Queen’s death dominated international mainstream media for weeks and it reignited a lot of old debates about Britain’s past and about the monarchy itself. What is your own view on the monarchy? Is it just a useless relic and a burden on the taxpayer?

Godfrey Bloom (GB): The death of Her Majesty was neither unexpected nor, obviously, unprecedented. The funeral and period of mourning showed the deep-rooted strength of the monarchy and it certainly didn’t trigger any republican feeling in Britain. Remember we had a civil war in the 1600s, which overthrew the monarchy, and we tried a Republic which lasted thirteen years. It failed when Cromwell died and nobody here really wants another go.

Let me explain how it works, especially for the benefit of any American readers who are usually foggy about it: Britain is a constitutional monarchy and a parliamentary democracy. Warts and all, it has worked pretty well in its current form for four centuries.

It is funded by an agreement between the Crown and the Parliament, where the Parliament gets income from Crown estates in exchange for a payment known as the civil list. This parliamentary payment is about half of the Crown Estate income. There are tax concessions, but the Royal family would be much better off as private citizens.

Let’s look at the constitutional position. The electorate vote for the party which offers a manifesto to their liking. If that party wins, it forms a government. An election comes every four or five years on average. Laws are proposed in the form of a bill, it goes to the Lords (the amending chamber), then voted on, and if passed, it goes to the monarch for royal assent. The monarch is ruled by the constitution (not written in one document as in the USA but a constitution nonetheless), also the monarch’s coronation oath.

The system works. It built the biggest, most benevolent empire the world has ever seen. (See Prof. Neil Fergusson late of Jesus College Oxford book “Empire”). I know this annoys libertarians, but only those with a poor knowledge of global modern history.

Now where the system suffers is when a royal house is dysfunctional, like the Windsors and when the monarch reneged on the coronation oath as Queen Elizabeth II did and as Charles III probably will. The British overthrow dynasties or they die out: Plantagenets, Tudors, Stuarts, and the Windsors too, I suspect, as Charles associates himself with gangsters in the WEF, oligarchs and celebrities and meddles in green politics. Our membership of the EU was illegal under our constitution and I believe the monarchy also abrogated their responsibilities in the great lockdown. This was an opportunity for a monarch to use the vital role of arbiter within the constitution, a very rare event.

As for Truss, any astute politician could have used the passing of Elizabeth to advantage. She is not astute, nor has she I suspect the depth of intellect or conviction to succeed.

CG: From an economic perspective, it could be argued that even though Truss won, she lost – in the sense that she assumed control of an economy that is not dissimilar to the Titanic after it hit the iceberg. In your view, why would anyone even want this position and do you think there’s anything that can be done at this point to salvage the situation?

GB: The Western economic situation is dire, but it is not beyond saving. At the risk of sounding parochial here is what she could and should do.

This would save £1.3 trillion and the UK current account would balance. Also, essential steps would be deep-rooted permanent tax cuts for the future and a constitutional ceiling on government spending of 7% of GDP, as well as a return to hard money, asset-backed, with a combination of precious metals, land and a basket of commodities.

CG: What is your understanding the role that the Russian gas pipelines played in the Ukraine conflict?

GB: The US president and his senior colleagues were quite up front about the destruction of the Russian pipelines. They said they would do it and they did. Washington has also made no secret of the desire for regime change in Russia, as in Panama, Grenada, Syria, Iraq, Somalia, Afghanistan, Libya et al.

America has 800 overseas bases, 200,000 overseas military personnel, eleven aircraft carriers, a $ trillion annual military budget. The USA has a social attitude to the military akin to 19th century Prussia. It’s been in a war of some sort almost continuously from 1776 !

The country’s leadership has no moral compass. It has abandoned its constitution, it is a secular society run by the military industrial complex of which Eisenhower warned in 1960. Its foreign policy is dictated by an institutionally psychopathic and unaccountable CIA of which Kennedy warned. This has brought a great nation to financial and moral bankruptcy in possible terminal decline.

Britain must reluctantly disassociate itself from what is now a rogue state and await a new leadership to draw it back from the brink. As with America, the EU has lost its way too. It has degenerated into a centralized neo-socialist state, not wedded to war, but instead to green politics and welfare. A loose confederation of like-minded classical liberal countries is now a bankrupt monstrosity.

Britain has nearly escaped its clutches, but has not severed the cord completely, because the political and bureaucratic class actually want Brexit to fail. But it is irrelevant anyway. The global future is in the Shanghai Cooperation Organization. The West must understand that and realize the future of Europe is there and the West must defer or decline. Africa, the BRICS nations & even the Indian subcontinent are on board. Denial is futile.

CG: In your opinion, not just in the UK but also in most “advanced” economies, is there anything that can be done at this point to avoid a hard recession or a long and painful inflationary period? What would be your advice to a conservative and responsible investor who is seeking to protect his savings during these uncertain times?

GB: There are some serious obstacles in the way of success. The West has two generations of electorates committed to state solutions to every problem, when libertarians know the State is the problem. All Western democracies today face problems caused by their politicians, not as they would have you believe, some force majeure. History shows, when society collapses, people ironically call for more government, not less. This is how we got Napoleon, Stalin, Hitler, Mao, Franco, Mussolini.

What should an investor actually do? Well, don’t invest at this stage of the cycle. Wealth preservation is the key. Gold is the historic preserver of wealth as it has been for five thousand years. Gold held in specie, that is, not paper gold. Locked away where it is difficult to steal.

“Real innovation and progress happen beyond Big Tech”, Part One

Those who know me and who have read my writings before will be very well aware of how important the topic of decentralization is to me and to my way of looking at the world, [more…]

Despite much anticipation the economic recovery plan proposed by Britain’s new prime minister, Liz Truss, is missing one key ingredient that will ensure its failure–spending cuts. The new “temporary budget” presented by her Chancellor of [more…]

Graphic EJ – Updated by Sam. Fiona Bruce presents a special election edition of the programme from Sheffield. Each political leader has 30 minutes to debate with the (rigged) audience. On the panel are: Jeremy [more…]