If one, parent’s night, your daughter’s Italian teacher tells you Latina is the ugliest city in Italy and adds in a whisper, “And then there’s Mousillini”, don’t agree with her until you’ve visited. Situated on the Appian way only 34 miles south of Rome and bordering the Tyrrhenian Sea, Latina’s 126,000 souls live in the provincial capital of Lazio. Founded in 1932, when Musillini literally drained the swamp and built a model new town, the commune is laid out in blocks within a hexagon-shaped street plan in the, shall we say, ‘nationalist’ style.

Away from the centre, the ‘art of the state’ architecture continues, occasionally interrupted by a more fulsome Art Deco of curves and high windows. Il Duce’s one to one scale Lego set wouldn’t be the ugliest city in England but in Italy the bar is much higher. Your daughter’s teacher might have a point, culminating at the bus station whose brutalist lines portray the brutalist’s brutalism. It deserves to be topped with a statue of Brutus holding a brute on a chain.

By comparison, the boxy railway station with its long shallow platforms and little cover from the sun is almost quaint. Built in 1922, it predates the township and sits seven miles north of the town centre as the Rome to Naples via Formia line had to avoid the then still existent swamp.

Below, an elderly overly religious moralist who probably never has sex, waits at Latina railway station on a day trip to Rome to meet the Pope and take in the sights.

As for the roads, between my two stints in Rome the driving improved immeasurably. Gone were the days when you had to be a racing car driver to use the autostrada. The Eternal City’s pedestrians could now cross the road with their eyes open. Likewise, that sudden sideways movement that only Italian drivers in Italian cars could execute seemed to have passed out of the zeitgeist. One felt safer but simultaneously preferred the old days.

Three miles to the other side of the city lies the seaside and the superb Lido di Latina. The beach runs for about 6 miles around a bay topped and tailed by a northern drainage channel and the river Rio Martino. Just beyond the drainage channel is Latina nuclear power station.

As fortune would have it, we were able to use the Aero Beach lido club. Many parts of the lido are private clubs, others are public beaches. Suffice it to say, the private ones are better than the public ones and the private ones are hierarchal. If something’s run by a brigadier general (or some such) in the Italian Air Force it’s going to be properly done, immaculately clean, well organised and well worth smooshing into.

The procedure was to take your own food, store it undercover in the cooler, covered parts of the club and then get changed and enjoy the beach. As well as seats and chairs, there was swimming, beach volleyball, table tennis, keep fit classes et al. The children could run about all day unattended with their new Italian friends while the grown-ups sunbathed and I burned into my Italian nickname, Uomo Pomodoro (Tomatoman). I have been called worse.

Speaking of aero, Latina is home to the Italian Air Force’s 70th Wing whose tasks include beating up girls. Italian ladies are glam to start with, know exactly how to dress and when in uniform cause a gentleman’s jaw to drop. Remember Amanda ‘Foxy’ Knox’s jailers in the high heels? But even they look a bit rough after having their legs tied in a knot, heads banged against a tail fin and being thrown in the penguin pool.

Another of the duties at Latina is the early stages of pilot training. Close to our accommodations, there was a constant and not unpleasant piston engine buzz from what simpletons like me would call an Aermacchi but what the Plane Spotters Guide insists is the SIAI-Marchetti SF 260. From the cockpit, trainee pilots might look down on fertile farms with some out-buildings converted to villas for rent. One of these was ours.

Probably not visible from the air, would be the savage dog and big gates that closed off the mile-long drive from the main road. There wasn’t a wall around the property to deter banditos, just a dog and a gate. An uninvited guest could stroll in between the fruit bushes or even drive a tank through them. In hushed tones, the farmer’s wife, also glamourous, confided to me the charade was worth it to ‘keep the foreigners out’. Oh.

Fortunately, the foreigners in question weren’t Tomoatman, his wife and swarm of kids but the Romanians, who had their uses all the same.

Not at all like the English countryside, too hot for cows there’s no need for clart and 4 am milkings, the Romanians laboured among the water mellows and asparagus. Usefully, they had a van that rattled away all day and all night as there were no keys to start it with if it ever stopped.

One thing we didn’t have was a swimming pool. There was one nearby but with 5 children in tow, there wasn’t enough room in the car. Two travelled by boot for a while but it just wasn’t safe, especially with driving on the wrong side of the road and with the flat land and straight roads causing the accelerator pedal to drop.

Sometimes the Romanians could give lifts in their van for a modest fee but in between times it was a forced march with the foot slogging taking one hour and seven minutes in each direction which included a brief pause at the halfway mark to refresh.

For some reason, the children absolutely loved it and insisted upon doing it barefoot, Tenko style. Added to which, swimming is ten times more enjoyable with a sweat-on and bloodied feet. And as an extra bonus, after marching back to the farm, the children soon settled down to sleep.

Frightened the sergeants might knock me about and throw me in the pond, one invited oneself to the officer’s garden barbecue socials instead. One night there was a guest from the south, a radar chap. If you think Benbecula and Spadeadam are exciting, wait until you hear this. Is badinage an Italian word? It should be.

We were enjoying our burgers with Mediterrainain trimings, including seafood combed from the lido beach, in a newly built villa in an outer suburb of Latina. The finest Lazio wines were flowing. Not only that, things were going so swimmingly well, our host had broken into the special occasion grappa.

Now, my Italian isn’t great, the drink doesn’t help and by my second spell in Italy my hearing was going, but this humble writer of postcards is almost certain he has spoken to the radar wallah who was on duty the night the American’s shot down Colonel Gadaffi’s private jet and killed him. True fact.

Here’s something you probably all know or if you didn’t won’t be overly surprised to hear. All, and I mean all (as an extra layer of security), world leaders use body doubles. Yes, somebody out there was paid to look, walk and talk like Angela Merkel. In the antipodes, there are at least two horse-faced Jacinda Arderns.

Unfortunately, Gadaffi’s body double took over Libya and proved an even bigger handful than the real swivel-eyed mad man. I think that’s what the Italian Air Force’s slightly tipsy Mr Benbeccula was trying to tell us.

An excellent day trip opportunity, in the cooler hills behind the township, is offered by Fossanova Abbey, near Terracina. Only 40 minutes drive away, Fossanova is the death place of St Thomas Aquinas, the 13th century Dominican scholastic and definer of the ‘just war’.

Bare Gothic architecture reveals a plain interior which, with a little imagination, allows for the presence of several clues to the location of buried treasure, the Holy Grail, Golden Fleece or whatever, to keep the children busy while the adults stroll the monastery and its gardens. 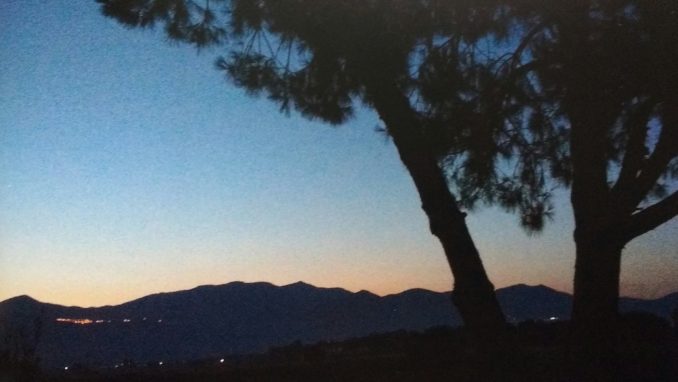 Is Latina the ugliest city in Italy? Possibly, but the beaches, the warmth of the locals, the history, proximity to Rome and the sunset over the Appeines, while exhausted children sleep, show even the most brillantemente presuntuoso of Italian teachers is telling only half of the truth.

When in the vicinity one feels obliged. After all, I am a Carlisle lad. During my previous life more interesting I found myself nearby and could adjust my schedule. If I was shot by an [more…]

Staycation; A Postcard From The Cairngorms (Part One)

Having held out as long as we dare we eventually, and somewhat reluctantly, cancelled our planned return to the beautiful island of Zakynthos and set about looking for somewhere to visit a little closer to [more…]