This is a personal memoir of several visits to the far north and going realisation of what had always been before my eyes, unseen and recognised. I am not an historian and certainly not of Finland’s wars in the 20th century. A lifelong pursuit and an often overlooked part of the Second World War came together. This memoir is as haphazard as that meeting.

For the western allies the Arctic War (1941-45) was a sea borne war; the Arctic convoys above all. The battle fought in the frozen waters of the Barents Sea through which the convoys taking crucial aid to Stalin’s armies after 1941 ploughed slowly, caked in ice in winter, threatening to capsize them with top weight – at times more than a threat so I have heard – and in the summer brought endless daylight and exposure to German air attacks, fast torpedo bombers launched from bases in the far north of Norway. U Boats were ever present. Major German warships, especially the mighty Tirpitz, lurked in deep dark Norwegian fiords waiting to pounce on masses of slow moving merchantmen.

There was another war fought in the high Arctic on land, or what passes for it in these beautiful and always daunting spaces of tundra and ice split crags, deep melt rivers bruising between black boulders at speed, while southwards the tree line drawn by intense cold, endless forests extend for hundreds of miles weaving between the bogs and the lake mazes of Fenno-Scandinavia. I have wandered in such places. The traces of this war here are indistinct. Until recently, in this present century, there was it seemed almost a collective vow to forget it ever happened. The history of this conflict is particularly complex, confused and confusing. It demanded too much the unwilling people here could give, gave back nothing. All chose silence, easier here than almost anywhere else on earth. That amnesia mirrors in reduced form the path taken by countries in the much more densely populated countries of western and central Europe following the defeat of European fascism in 1945; time to forget, misremember, pass by or invent. But I gather from what I have learned or have seen, not much to be sure, that in these thinly populated regions memories could not be so easily overlaid, and guilt not so quickly passed by. For guilt there certainly was.

I did not travel to the far north to study history or courage or endurance, find evasion; but some of this is was an unavoidable consequence of my wanderings; a strange slab of metal far out on a marsh pierced by large bullet holes – one can see their distinctively different entry and exit and marks left by rounds that failed to penetrate. A sizeable slab too heavy to lift. It is still there as of 2016. We came to realise that shallow depressions we found on a ridge beside our favoured woodland camp had nothing to do with hunting, at least not of elk, as we, in our ignorance, assumed until the numbers of these easy to miss now scrapes became too numerous and their equal spaced dispersion along a back slope protecting a road bridge crossing, significant at last. The circular bomb craters among pines out on the sprawling landscape we recognised early on – but why here? we thought. To us, this is no more a war torn landscape than a English Civil War battleground would seem now on summer day’s picnic. 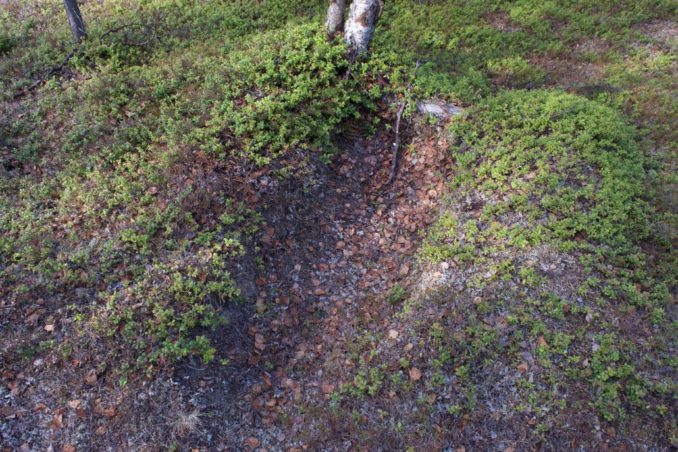 Finnish Lapland. Author’s photograph. Shallow scrape with log weapon support still just visible. The road to Karigasniemi  is behind and below this position, covering any flanking movement against retreating German forces. The then nearby road bridge over a river was blown. Pieces of concrete are still visible today. 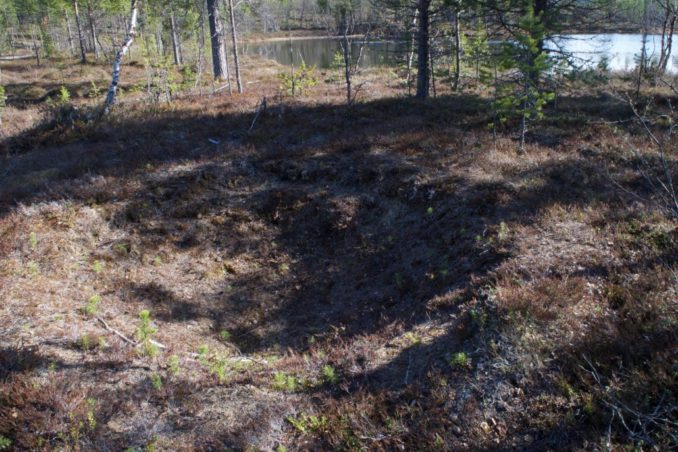 The change of heart over a forgotten conflict that came about so abruptly left more questions in our minds than answers. It was made possible by the end of the Cold War, the fall of the Berlin Wall being here demonstrated as in few other places on earth as the last act of World War Two. Driving along a familiar road leading out of the usual scattered Finnish township we saw at once the new War Memorial, cut out of a piece of land beside the road, its impressive static display of man’s inhumanity to man not quite hidden by trees, the always ubiquitous Scots Pines. We pulled into a stark white car park made by scraping away the thin soil from the glacial sands and gravel that lie just beneath everything here. It seemed so simple a way to reveal a great drama.

The last act of Finland’s part in World War Two was to be compelled to agree to expel the German forces that had been fighting alongside them against the Soviet Union. The wide modern road the memorial overlooks lays on the same grit road that snakes over glacial moraines and curves past the ends of tranquil lakes going north, beyond any standing vegetation to the bleak fells of northern Norway. It carried the lorries and armour of a German Mountain Division. 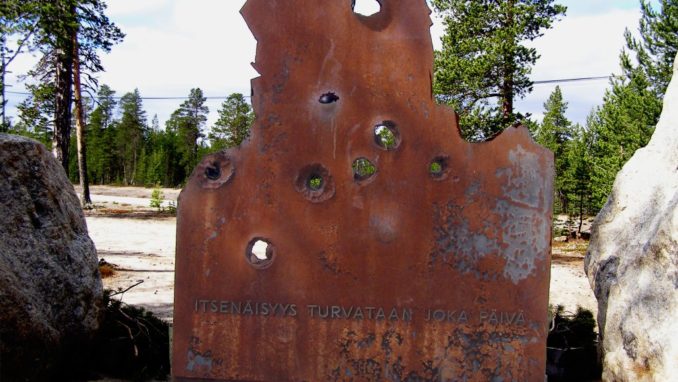 Finnish Lapland. Author’s photograph. Continuation War (1941-45) War Memorial to those who died in this region, as German forces retreated north west towards Occupied Norway following Finland’s Armistice with the Soviet Union. The top part of this impressive memorial seems to echo the shape of Finnish Lapland.

The idea for this came from some bar steward who read a comment I had made, imagine that , people reading the comments, perfidy I tell you. Anyway it seems the Morgenthau Plan may not [more…]

A Massacre of the Innocents