A sickening, plastic sounding, crunch. Check self – fine. Look around for any obvious danger – none. Smell for petrol – none.

The area wasn’t notably busy, some people across the road were looking over with curiosity and, hopefully, concern – gave the thumb up and said tuto bene. Some men, on my side of the road, were walking towards me. Told them that am English, have limited Italian’ and could they please phone the police? They helped try to move Bette but she was going nowhere – front wheel arch was pressed onto wheel. Police (riot van?) arrived, checked documents and tested for alcohol – tuto bene. They waited for the local police to arrive and left after satisfying local policeman, Leonardo, that documents etc in order.

Over the next few hours; we agreed that car would have to be towed (not driven) away, the fine for ‘driving without concentrating’ (EUR29) was paid – they decided not to charge for the damaged railings, phoned home to advise situation, tow truck arrived and had to call another (with crane)  to assist – car needed to be lifted clear of a damaged railing, tow driver would take me to a hotel that was open..had no idea of ‘lock up’ situation here in Liguria. 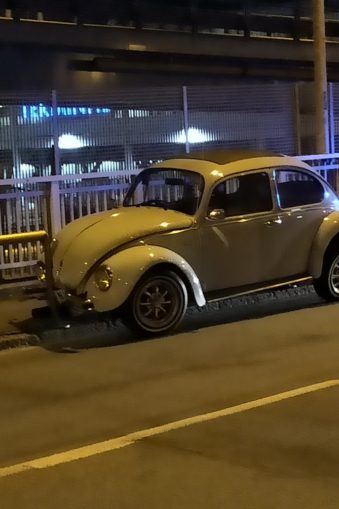 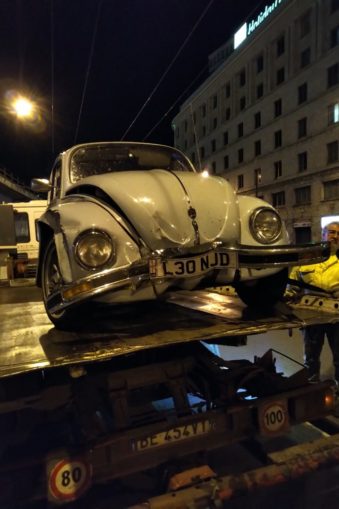 Hotel was one of a known chain, expensive but needed to sit and assess. No room service but was able to buy a beer and follow (manager’s) directions to a nearby 24hr kiosk for (basic) food. Phoned home to advise status and then car insurance’ 24hr claim reporting number. Next morning (Saturday) spoke to tow company, requesting that car be taken to a mechanic – this would not happen before Monday. Had a walk around Genoa, nearby found a hotel that was also fine and much more reasonably priced. Ascertained ‘lock up’ situation in Genoa: masks obligatory in any ‘open to the public’ buildings, of course including the only shops open – food, child clothes and pharma. Cafes, restaurants and bars could be open but ‘porta via’ (take away) only. Lock up was being lifted, everywhere, on Monday week.

Plan: Confirm car repairable, if so, ascertain cost to make driveable / cost to make perfect and duration of either. 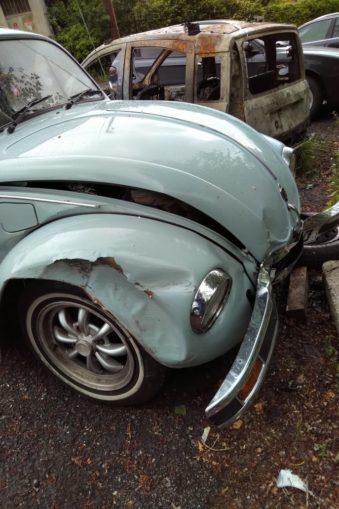 On Sunday, whilst having un caffe in Piazza Colombo, Leonardo phoned to check that all was OK / offering help if not. He wasn’t at work, nor was this call anything other than typical Italian hospitality. Had purchased caffe from nearby barman Pino who named me ‘English’ (Inglache). Subsequently had a call from Noreen at car insurance company, responding to the ‘24hr’ claim advice – she was helpful and requested photographs of (damaged) car. Duly sent.

Note: have been ‘in’ insurance (at Lloyd’s) since leaving school in 1990 at nearly 18…in the good old days when you weren’t allowed into the market until you knew what you were doing.

Was surprised to be advised that Bette was to be ‘written off’- not beyond repair, beyond economical repair…not helped by her being in Italy whilst the UK is locked up. This article could easily become an insurance lesson, will refrain’ but happy to answer any questions. In short, the insurance company can write the car off ie pay the sum insured and the ‘wreck’ become theirs.  In the end, they paid (the agreed value) and sold Bette back to me for very little. Cost / duration of repairs were prohibitive, decided to get Bette trucked back to excellent mechanic / Beetle specialist – Steve. 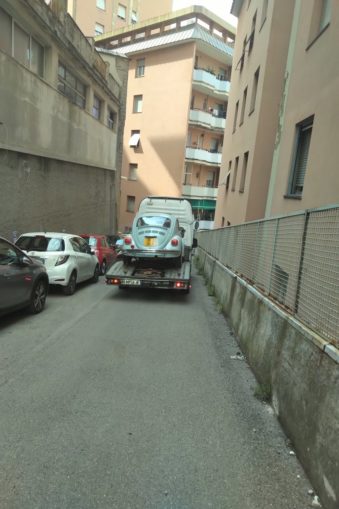 It transpired that travel to Sicily via (Genoa) ferry would be impossible until 3rd June, the date when Italy inter region restrictions were being lifted. Had left England 7th May.

Where have all the CEOs gone?

“Boardroom” by TChapman9 is licensed under CC BY 2.0 According to NBC News, if you choose to place any faith whatsoever in the corrupt and corporatised media, over 1300 CEOs left their post just before the outbreak of the [more…]

So…………….according to the corporate media, this is it for Roossian-backed Hitler. Game over. The walls are closing in. It’s the last days of the Trumpian Reich. Go get those whistles & flags ready, people! Yes, [more…]

More of the same is the best description of November. The Italians got their butts kicked both in and finally out of Greece resulting in the Duce eventually having to grovel to the Führer and [more…]