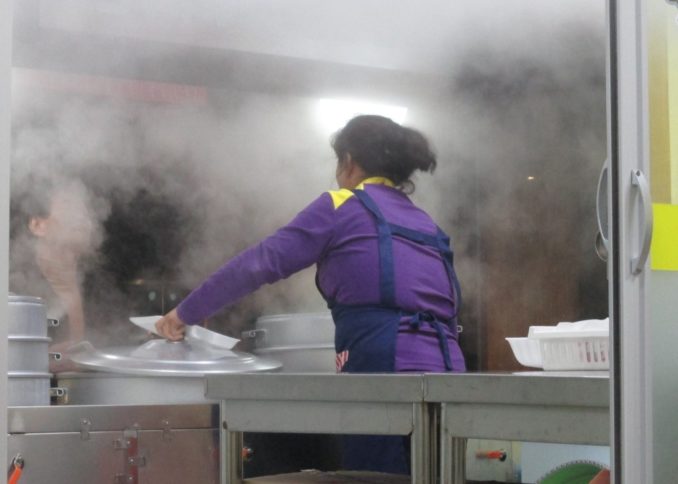 When I left the hotel the following morning, the receptionist was away on an errand – she had left the whole establishment unattended. I waited for five minutes, studying the lobby décor. It had that bewildering array of clutter you often find when cheap Asian hotels try to look cosmopolitan, but the budget does not extend to harmonised styling. There were baroquey chandeliers, a relief Greek temple portal in one wall, American colonial scenes on another, a Chinese character scroll, and, in a corner, a fat indoor tree that was too large for its bucket and half-blocked the office door. It looked as though somebody had scavenged a junkyard in a blindfold.

I owed the establishment 1,000 won for a fruit juice from the fridge, but I was getting impatient now, so I left the money under the key on the counter and walked out. When I met the receptionist a moment later in the street, returning from her morning shopping, she just made a forget-it gesture and said goodbye.

“Well, thanks,” I replied, walking away. Only then did I realise that I had not been asked to provide any personal details at this hotel – no passport number, address or phone number. She hadn’t even wanted my name. I had just gone in there, received a key after handing over 40,000 won, and that was it. She must have filled in her room grid as if it were a bingo card. And this place was not strictly a motel, where anonymity is part of the basic deal.

Six months before this, back in Britain, I had arrived very late after a day of cycling at the—let’s say—Majestic Hotel in central Birmingham. Tired and hungry, I had been told that although they had a few rooms, I could not have one because I lacked photo ID. They had refused to take either the signed cash or credit card I waved in their faces, and told me I would find all other major hotels in Birmingham would likewise reject me. I did not ask why I needed to show photo ID — nobody living in twenty-first century Britain needs to ask that any more, do they? — but, as it turned it, one of the big chains did take me in, albeit at price over five times what I paid at this place, and so I just escaped a night in a doorway in the Bullring. I’ve little doubt that what the Majestic told me is essentially true: namely, that public trust has now sunk to a level where British hotels have to treat British citizens like potential terrorists, at least in dumps like Birmingham. Yet here in Korea, which is still technically at war with its only land neighbour, and where infiltration is a constant risk, a foreigner can walk into a hotel and get a room without even giving his name. Which, I wondered as I walked down the road to central Mokpo, is really the more advanced society now?

Mokpo is a midsized city, with several different faces: regional, cultural, business and shopping centre, and fishing and ferry port. It wears them all comfortably. It seemed a relaxed sort of place, albeit a bit depressed, and its position crammed between a close mountain backdrop and an island-dotted corner of the West/Yellow Sea made for some great panoramic views.

A city has stood here since Korea’s Three Kingdoms days over a thousand years ago, but there can be few places in Asia of similar size with less history to speak of. For an international readership, Mokpo’s can be condensed to a single line: It was one of Admiral Yi’s bases for his fleet in the Imjin Wars of the 1590s, it was a strategic hub in Japan’s short-lived colonial empire, and the locality was the birthplace of Kim Dae-jung, who, I came to think by the end of the morning, must have been one of the bravest of all elected postwar leaders. 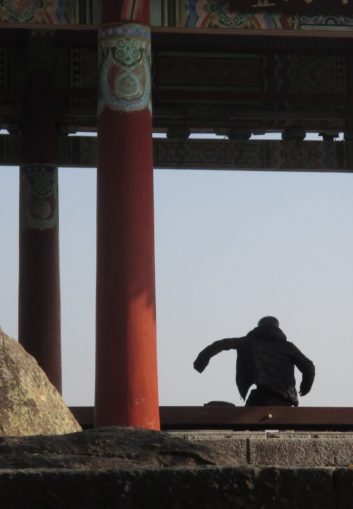 I must admit I knew little about Kim, South Korean president from 1998 to 2003, before entering the Kim Dae-jung museum, a little-visited complex tucked away in a half-developed tract of land a bit away from the harbour. It was a big, new memorial hall, dishearteningly reminiscent of a Soviet-era palace of the people, and I was not surprised to find I had the place virtually to myself. The exhibits were mainly personal effects and other mundane stuff, and much of the display text was platitudinous puffery connected with his Nobel Peace Prize award. But my disdain faded when I read the translated excerpts of his letters, written in the old way with beautifully formed Chinese characters, and newspaper reports of key events in his life.

Kim was Korea’s first democratic president by free and fair election. That triumph came at the end of a tumultuous life. During four decades of battling the generals, he was jailed, tortured, driven into exile, sentenced to death, kept under house arrest, kidnapped and once minutes away from being murdered. That last episode began in a Tokyo hotel, in 1973, where he was captured by South Korean agents, spirited away and put on a boat to be discreetly disappeared. His captors had already blindfolded him and stopped up his mouth when an American airplane appeared overhead and the plot was aborted — an intervention Kim, a devout Catholic, came to regard as divine.

In another self-written account on display, which I found even more chilling, Kim describes what it is like when a judge hands down a death sentence on you. “I watched his lips. If they moved horizontally that meant I was sentenced and if they moved vertically it would mean I was acquitted. Vertical meant life and horizontal death. The judge’s lips moved horizontally.” The charge had been sedition, after a failed coup attempt. He was spared after God stepped in again, this time via a papal intervention.

It was truly arresting to think that this poor nobody from the mudflats of a nearby coastal island, who championed Korea’s most deprived region and risked his life for his political beliefs, was the counterpart of Tony Blair and for a while his exact contemporary.

Lausanne in the rain

Lausanne, 2014 Back in the 1980s, I had been in Switzerland mainly to make a bit of money and “have an experience.” I hadn’t really been too concerned with the politics or culture of what [more…]

Still in business, after all these years

потребительский кредит лучшие предложения I don’t know how fast you can cycle from Land’s End to Berwick. I dare say there will be a few people who have done it in two or three days, [more…]

The Switzerland I knew in the 1980s was the other side of the country from Vaud, the remote canton of Graubünden (Grisons), home to German-, Italian- and Romansh-speaking farmers and villagers, where Alpine cattle were [more…]