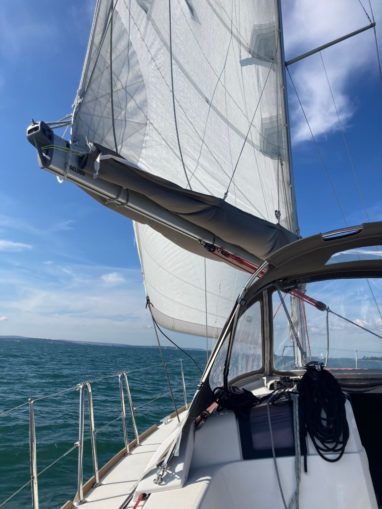 A couple of days ago I chartered a 38 foot sloop for the weekend with my sister, her husband and a friend.
We set off from the Hamble River near Southampton on Saturday morning. It was sunny and warm enough for late September with a good breeze to waft us down the Solent to the Needles.
My friend had never seen the Needles, and to show her the sight properly I sailed the boat around to the south side for a better lit photo. 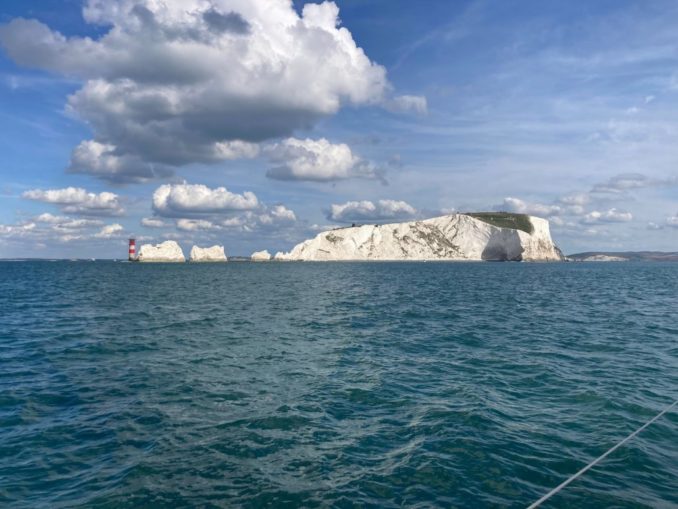 A couple of miles away I noticed a grey ship that turned out to be HMC Vigilant, a cutter operated by the Border Force. She was mooching about doing little and my brother in law (ex-Army) and I mused on the matter of what she could be up to.
Practising a bit of hydrography,I guessed, lamenting the decline of the Royal Navy Hydrographic Department. There were few other boats and ships around that we could see. 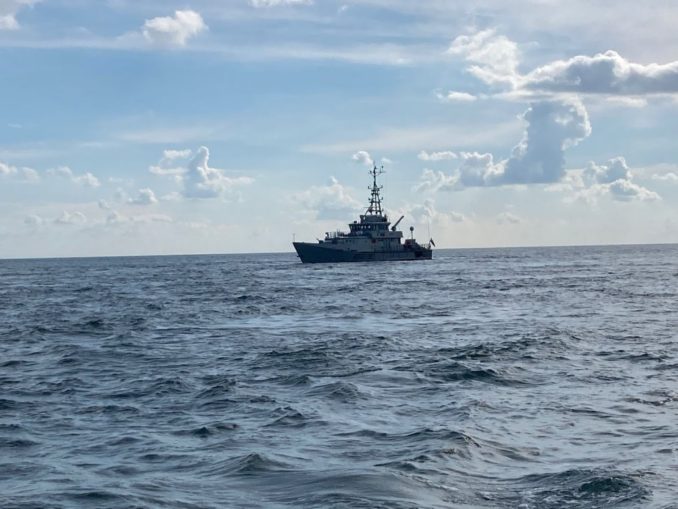 We tacked gently in the force 4 breeze and had a light lunch in the cockpit, waiting for the tide to take us back past Hurst Castle to Yarmouth. I had planned for a couple of pints of Wight Squirrel in the King’s Head that evening.
As we approached the Needles again my friend pointed astern and asked:’Why is that little boat following us?’
I turned around to see a black RIB with Border Force stencilled on the side in white letters cruising toward our sloop. 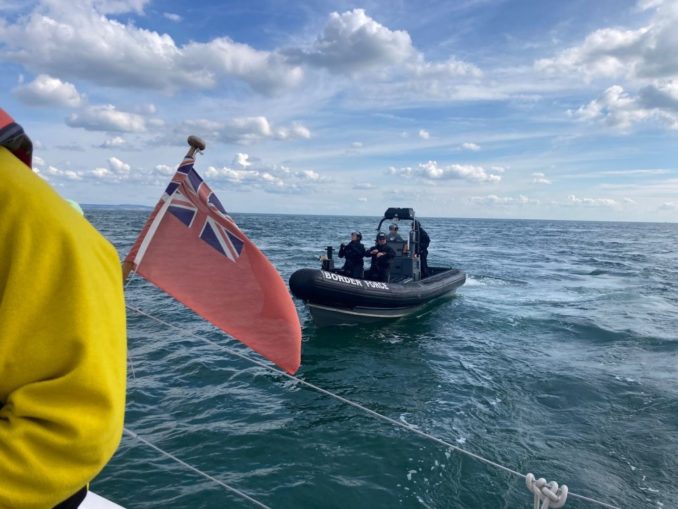 They hailed us.
‘Where are you from?’
I was flying a red ensign with a boat sporting an English name.
‘The Hamble,’ I replied above the noise of their engine, or so I thought.
‘Where?’
‘The Hamble!’
‘Okay, we are not boarding you then.’
With that the RIB headed back towards HMC Vigilant, and we continued on a fine reach.
Two minutes later. My brother in law said.
‘They’re coming back.’
‘Really?’
The mood in the cockpit changed. I was still calm and chuckling a bit since I knew I had done nothing wrong. However, Cornish ancestry makes me genetically suspicious of the Revenue Men.
At 6 knots I wasn’t going to outrun them.
‘We are boarding you.’
I held my course and allowed the RIB to come alongside on our windward side..
Four Border Force Officers clambered aboard resplendent in black with helmets and face shields to confront four middle aged amateur sailors.
I know yachts sailed by middle aged English people have been known to bring in illegal immigrants and drugs, but as we had not strayed more than 2 miles south of the Needles and the Isle of Wight had not, to my knowledge, unilaterally declared independence, I wasn’t worried. Below is an image of my route for the day. 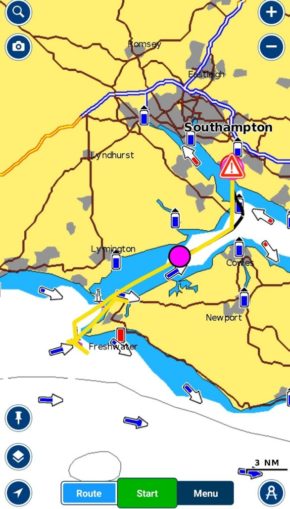 ‘Is this your yacht?’
‘No, I rented her for the weekend.’
‘Can we see your passports?’
‘We haven’t got them.’
‘How did you get in and out of Hamburg then.’
‘Hamburg? I said Hamble!’
Cue confused looks, then slight embarrassment and smiles as the reality dawned on them.
‘Oh, lost in translation,’ said the team leader.
Quick radio call to HMC Vigilant followed.
‘Okay, no search needed. Just a few more questions and details to go through.’
‘This is my friend’s first time on a yacht. She will think this happens every time now.’
Pointing to the youngest officer the boarding team leader told us:’This is his first boarding at sea.’
Confusion cleared up the RIB was called back and the leader told us we could now take our photos. 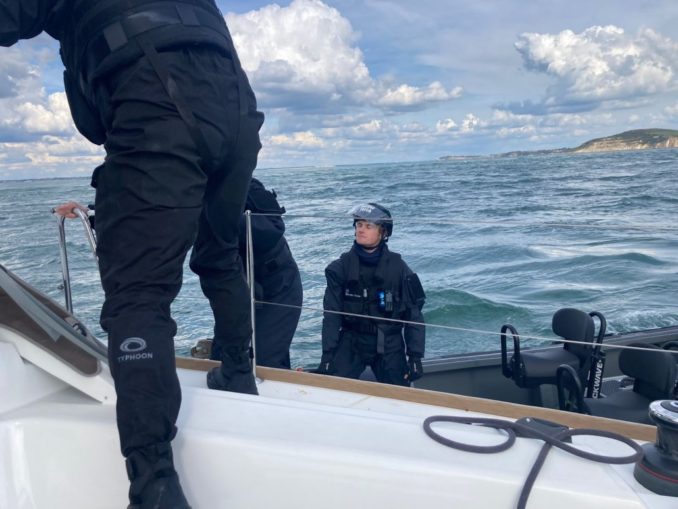 As they motored off I wondered at the current Border Force ferry service a little further East and compared it to our experience.
No boarding of illegal immigrant inflatables; well it is safer to board a boat crewed by middle aged English people. No offers of free hotel accommodation made to us. No free healthcare, legal advice, education, benefits and longer term housing offered either, just the knowledge that my taxes go on this, and on Monday I would also be obliged to provide some of that healthcare.
Maybe I should have suggested a hearing test for the boarding party.
I can’t really complain much. The boarding party was polite, but what the hell are they up to? There is a real crisis and has been for a few years. We have more manpower and assets than the Australians had to turn back the boats coming from Indonesia, and yet our leaders seem to welcome it, and mouth platitudes while slipping France a few million pounds with no tangible results.
Having been a GP reader for a few years (yes, I confess I have read the odd comment, but I claim that there is an evil force acting here that makes us all do it. Yes, I am looking at you GQ!) I know that our government and civil service despise us, but it still shocks me that the English Channel is now less safe than at any time since 1945. I don’t wish to exaggerate. It is not a war zone, but an experienced skipper taking a large sailing ship with me as one of a crew of about 50 past Calais a few weeks ago, made his trip at night to avoid what he explicitly called the danger of the illegal immigrant boats, and our actions reminded me of the Channel Dash of 1942, when Scharnhorst, Gniesenau and Prinz Eugen with escorts raced from Brest to Wilhelmshaven.
At least in 1942 the British forces had a go at stopping the enemy. Now British forces facilitate the enemy.
It is a Border Farce, but it is not funny.

Looking at that chart record made me think the Border Force are as confused as the Russian Admiral who opened fire on the Hull fishing fleet believing it to be the Imperial Japanese Navy in 1904 in what became known as the Dogger Bank Incident.
When I was thinking of writing this up I thought it would be funnier. Having typed it I now see it as very black comedy, and I am more angry than amused.

A View From The Greenhouse; Lies, Damned Lies And Immigration

As you read this, dear friends (assuming you do and you are) I’ll be relaxing, possibly with a pint in hand, somewhere in the North East, on a short break with the wife and the [more…]

For those not fortunate enough to have received a classical education with a strong foundation of Latin, the above title may seem rather peculiar. How, in the name of all that is logical and sensible, [more…]

It’s been nearly two months since the alarm was raised. “Migrant overboard in English Channel.” That was the night of August 18th and it wasn’t long before the headline writers got to work, blaming the [more…]