Last time on Mystery Album, we enjoyed the briefest of ports of call in Copenhagen. As we turn another century-old Photex Expandable Album page we find ourselves re-visiting the world of steel wheel, steel rail and steam. Recourse to the magnifying glass shows a partly obscured nameplate that reads ‘otland’. Given the locale, and following quick reference to an internet search engine, the full plate can be assumed to announce ‘Gotland’.

This is Gotlands Järnväg (GJ) locomotive Number 3 (Lok Nr 3). Built by Nydqvist & Holm AB at their Trollhattan works in 1878, Nr 3 was shown at the World Exhibition in Paris in the same year and awarded a silver medal. Upon the nationalisation of Swedish railways in 1947, she became K2p 3062 of the Statens Järnvägar until 1953 when she was retired after 75 years in service. Allocated to the SJ museum in 1956, the 0-6-0 was donated to the Gotland Heritage Railway Association in 1992 and is on display in their carriage hall at Dalhem. 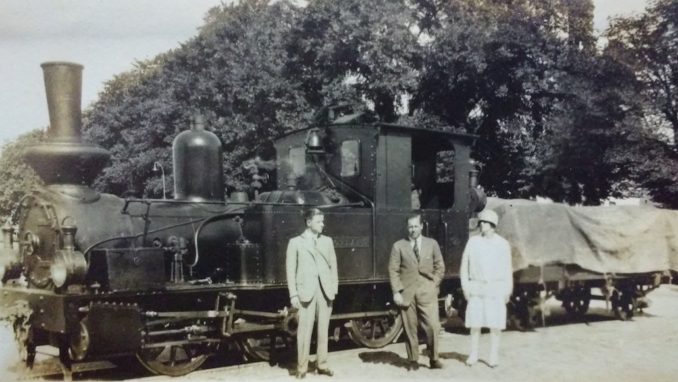 As the numbering suggests, the K2p’s were the first locomotives of the GJ. Nr 3 was one of a class of three, her two sisters being Nr 1 Wisby and Nr 2 Polhem. The line between Visby and Hemse via Roma was inaugurated by King Oscar II on September 10th 1878. After which the network was extended from Visby to Vaskinde, Tingstade and Larbro, which wasn’t reached until 1921, only a few years before our mystery family paid their mystery visit. The original 54.3km stretch to Hemse included a hemp factory, quarry, sugar mill and gravel pit, giving an idea of the kind of freight traffic the narrow gauge line handled.

Gotland itself lies off the eastern coast of Sweden in the Baltic sea, 100 miles south of Stockholm and over 220 miles northeast of Malmö. One hundred and nine miles long and with an area of twelve hundred square miles, Sweden’s biggest island has a modern day population of about sixty thousand, more than a third of whom live in the city of Visby. Famous former residents include, Eric the First of Pomerania, Victor Kullberg and Hjordis Petterson. Oh, not forgetting five times married father of nine, movie great Ingmar Bergman who died at the remote northern extremity of Faro in 2007, aged 89.

These days no railways remain on the island. As well as the GJ, all the other narrow gauge routes; the Slite-Roma, Klintehamn-Roma, Southwest Gotland, Ronehamn-Hemse and Visby-Visborgs Slätts Järnväg are now defunct. The last scheduled services were withdrawn in 1960 with the occasional goods working from Visby to Visby harbour continuing until 1963. What does survive, is a railway museum at Dalhem with 6.5 kilometres of preserved track to Roma, and a vagnhaller whose exhibits include the immortal Nr 3 Gotland. 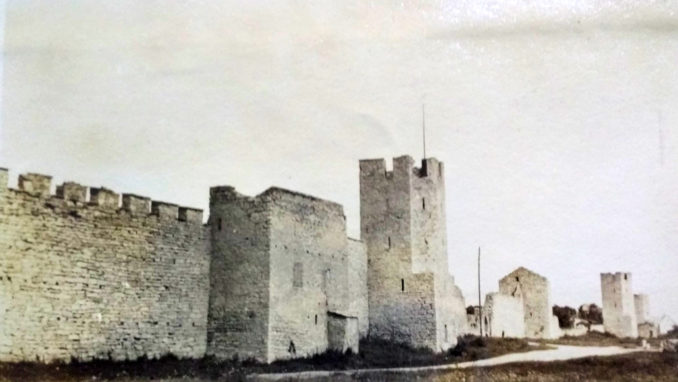 As belies Visby’s importance, a big wall surrounds. Using Street View it is possible to stand on the exact spot from where the above photograph was taken. Although the walls are recognisable to the extent of being unchanged, the town has spread to the right, inland, to reveal nothing but cars, retail parks and Lego style housing. 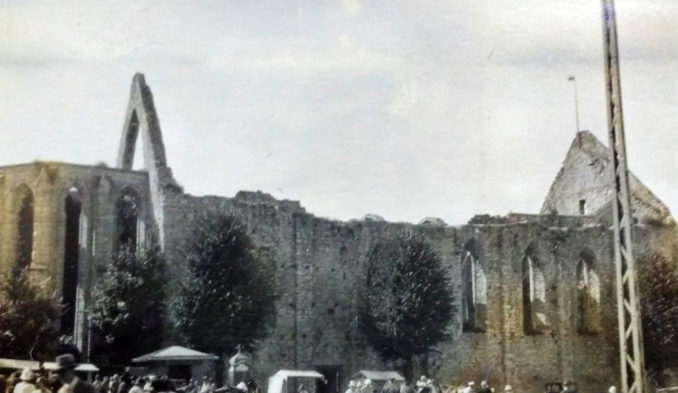 The abandoned building is Sankta Karin. Dedicated to St Catherine of Alexandria, the chapel was contructed by the Franciscan Order of Visby Convention and completed in 1250. The architecture resembles one of the cow houses we discovered in Norse influenced Swaledale. Note, to the bottom of the photo lie touristy market stalls and to the left centre bottom sits an example of an early Swedish onion domed telephone box.

Again, it is still possible to stand on the exact spot. One tree has not only survived but flourished and the square, called Stora Torgot or ‘Large Square’ is still a magnet for street vendors. Those present day Street View oldie worldie lampposts must be fake as they don’t appear in our old photo. The other three sides of Stora Torgot are described by hostelries. A pirouette suggests our mystery party were being refreshed at the Bageriet Barrather before or after saying their prayers. 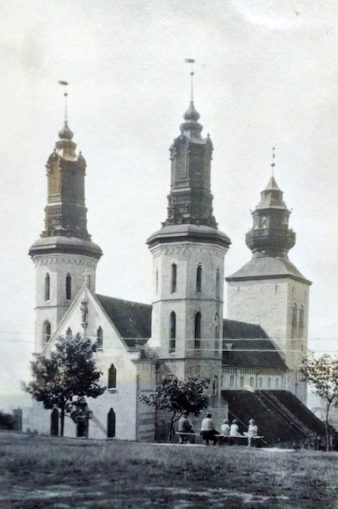 Visby Cathedral can also be seen from the same viewpoint but the trees have grown to spoil the aspect. A modern-day photographer also has competition from a road and road signs. The holy place started life as a church built by German traders in the 13th century.

After the battle of Visby in 1361, Gotland became a Danish province. Following the Danish Reformation, there was only need for one church for the port’s one permitted denomination. Hense the other places of worship, such as St Catherine’s Chapel, falling into disrepair. This photo was taken from Nygaten, a delightful cobbled street of old buildings within the city wall, many of them snug bungalows with rendered walls and clay-tiled roofs.

An exception is Number 37 Nygaten, to the left of the photographer. At first glance, 37 resembles a modern outsized cow shed ruining everybody’s view of the cathedral and the bay beyond. Closer inspection reveals an old engraved stone next to the main side door. Reminiscent of my own Debatable Lands, 850 miles to the south and the west as the migrating barnacle goose flies, the inscription says “Bell-Lancasterska”.

This refers to Andrew Bell, an 18th-century Scottish physician and educator and co-inventor of the Bell-Lancaster teaching method. While a regimental priest in Madras, Bell developed a system of educating poorer pupils by instructing the older who then taught the younger in small groups. His partner was Joseph Lancaster, a teacher who worked in the poorest areas of working-class London at the turn of the 19th century.

Regular readers may recall your humble reviewer of photographs began his education in the colonies and, without being able to put a name to it until near his seventh decade, benefited from the Bell-Lancaster technique. If you spot a dangling modifier too many, you now understand why. Bell-Lancaster schooling reached Sweden in the 1820s, ideal for a sizeable country with a small and dispersed population. One such establishment was the school on Nygate which was built in 1822. Number 37 went on to become a conventional primary school, navigation school and handicraft school.

At the other end of the building from the Bell-Lancasterska engraving sits another plaque. Difficult to read, this appears to say BCWT. Further investigation shows Nr 37 is now the Baltic Centre for Writers and Translators. Looking through the blurb, residences are available. Free board and lodging is offered for appropriately talented natives of the northern latitudes. As the Debatable Lands debatably lie within the Nordic-sphere, the thought of producing Mystery Album from a studio apartment in a luxuriously re-developed property, with a free Mac and mega-fast Scandinavian broadband, proved irresistible. If BBC reception is awful, the iPlayer inaccessible and watching Question Time impossible, so much the better.

However, my Swedish is a bit rusty. Partway through filling in the online application form, I spotted overuse of the term “trans-artists”. This might refer to the transnational nature of Nordic creatives like myself. Then again, it might not. In haste, I clicked the cancel button and returned to my 100-year-old Photex safe space. More innocent times.

Visby proved to be another brief port of call. Next time on Mystery Album, a new havn beckons. One that promises another appointment with the Danish Order of the Elephant.

© Text and photographs unless other credited Always Worth Saying 2021

Another chapter from “Special Assignment” by my uncle John Alldridge (published in 1960 and now long out of print) Halfway over Putney Bridge the No 14 bus jolted to a halt. Behind it the rush-hour [more…]

At first glance, it would seem unlikely to drive all the way from Carlisle to Gibraltar just to take a photograph of a filling station. Albeit an interesting one which was, as we saw last [more…]

“An app for everything these days, Mrs Wong and Mr Worth.” We’re on the IT floor of the school for savants opposite my rented home on Dumfries Street, Kovan, Singapore. My absent landlord, Mr Stein, [more…]