On last week’s Mystery Album we surmised our mystery posh mystery family of travelling photographers de-shipped at the dockside in Stockholm sometime after 1925.

For those wondering (Postcard from Lille style), are we there yet? No, we’re not, Stockholm being another brief port of call, allowing for the snapping of a few photographs during a stroll around the town.

As every Puffin knows, the capital of Sweden sits at 59o 19′ 49” North which puts it on a latitude between the Orkney and Shetland Islands.

The city stretches across fourteen islands astride narrows where Lake Mälaren meets the Baltic Sea. Archaeological evidence suggests the area has been settled since the stone age with the municipality being founded as a city in 1252 by Birger Jarl.

After a mile-long trip on a local ferry, our mystery family visited the recognisable Stockholm City Hall which remains unchanged today. 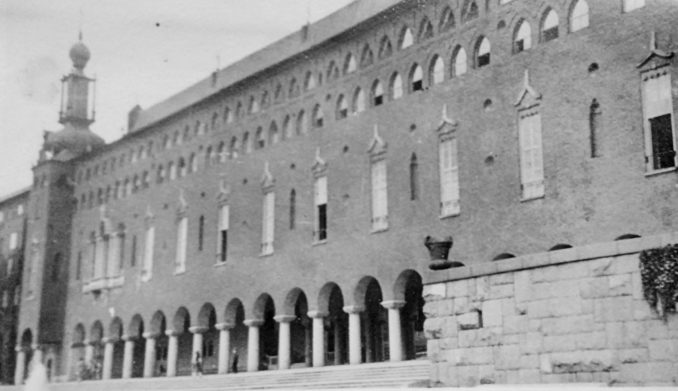 On Street View you can still stand on the same spot and in doing so we realise the squared stone abutment to the bottom right leads to steps down to the water.

What you can’t see, is a column to the left and, to the right and at the end of the building, the golden sarcophagus of the aforementioned Birger Jarl.

My Swedish isn’t perfect and it’s one of those daft languages where meaning depends overly upon pronunciation. Hence Gre-teh Thunberg having to be addressed Gre-eeer-t’. This isn’t helped by seeing the written word on city hall plans while being used to the spoken word on boozy ferry-train rides. Or during rows over what can be brought back into the county after the VAT has been reclaimed from an out and back dash to Soviet-occupied Estonia.

Also, on my keyboard, I can’t find the accents used above some letters and don’t recall what the diaeresis and overring do to the vowel sounds anyway. Plus, I’ve always been a bit deaf.

Vastpartiet must be the west end, sodra langan the south side (or length) and norra langan the north side. Bla Hallen is the Blue Hall and Gyllene Salen is the Golden Hall (think of a salon as being a small hall). Borgargarden is the castle garden or courtyard. Borg means castle. If a placename contains ‘borg’, a castle is nearby. Tornet means tower. The X and arrow are for later.

Built with 8 million mud bricks, City Hall was inaugurated on 23 June 1923, 400 years to the day after King Gustav 1st arrived in Sweden. During his rule, the country became independent of Denmark, Norway and the Pope with the establishment of the Lutheran church in 1536.

With its waterfront vista, arches, tall campanile like towers and lots of steps one might be reminded of St Marks Square. Sure enough, the architecture textbooks describe the Ragnar Ostberg designed municipal building as being of the Venetian gothic style.

Beyond the right-hand side of the older photograph is the 106-meter high tornet complete with an elevator and 365 steps to the top.

The Gyllene Salen sits inside the building on the second floor and is decorated with 18 million tiles. At one end, a mosaic depicts a pop-eyed pharaonic Moder Svea, or Mother Sweden, with the bounty of her’s and other countries laid before her. Behind her stands a pyramid topped by an all-seeing eye. Instead of the usual sword and shield, Mutter Svea holds a sceptre and crown denoting civic and royal power.

Not what’s contained in the guidebook but what it suggests to this observer. Other parts of the magnificent interior can be seen here.

The annual Nobel Prize banquet, attended by the Swedish Royal Family and 1,300 guests, is held downstairs in the Blue Hall with guests ascending a stone staircase to the Golden Hall for the ball that follows.

Old friend of Mystery Album, King Oscar II, didn’t like the awards going to foreigners but changed his mind once his attention had been drawn to the publicity value to Sweden.

Unfortunately, the Nobel Peace Prize is awarded in Oslo. In 1979, Stockholm attendees missed out on Laureate foreigner Mother Theresa of Calcutta giving progressive liberal Scandinavia a hard kicking (and putting everybody off their deserts) by choosing as the subject of her acceptance lecture South Asia’s ‘maggot-ridden’ poor accompanied by a frank defence of the rights of the unborn. 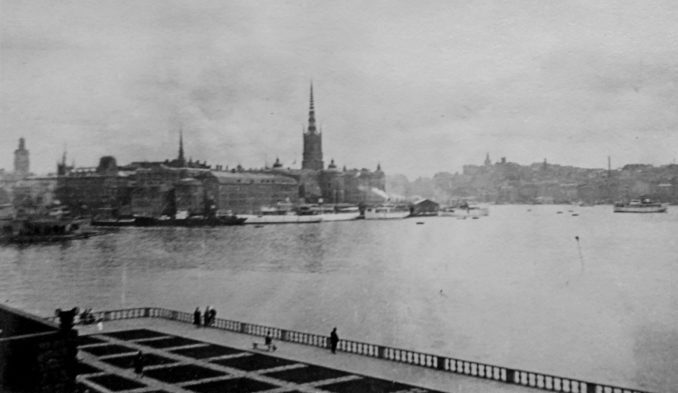 If we examine old photograph number two (above), it is taken from where X marks the spot on the floor plan with the camera being pointed in the direction denoted by the accompanying red arrow.

On the east side of the promenade, a columned wall is in situ (rather than access to the riverside steps) and in the southeast corner there is not yet a monumental pillar. That pillar was to be of Englbrekt Engelbrektson who, prior to the independence declaration of King Gustav 1st, led a rebellion for Swedish independence from Denmark in 1434.

An undisplayed photograph held by the National Maritime Museum at Greenwich is described in the catalogue thus:

The Gamla Stan district from the Stadhusparken in front of the City hall in the Kungsholmen district, Stockholm, Sweden. The photographer is looking east-south-east showing the scallop shell fountain in the Stadhusparken and a few people are walking in the grounds. The statue of Englbrekt Engelbrektson on its 20-metre high column has not yet been erected in the corner of the park.

Elsewhere in the index, the photograph is dated between 1928-1934. Is this the same photograph as in our Mystery Album? No, as a scallop fountain is mentioned but not visible in our picture. However, the latest date attributable to the Greenwich photograph is 1934 and the Engelbrektson statue has not yet been erected. As 1934 would be the 500th anniversary of the Engelbrektson rebellion, is it fair to assume the column was erected in anticipation of 1934 and our photo was taken before that date?

This part of Stockholm is bounded Lake Malaren with the small park between the shore and City Hall being called (as mentioned above) the Stadshusparken. Rather drab at the eastern end, the western end offers more through ornamental hedges, trees, statues commemorating famous Swedes and the scallop shell fountain.

Passenger ferries are alongside the Riddasholmshamnen on the far side of the Riddarfjarden and the iron steeple of the Riddarsholms Church dominates the centre of the picture.

That interesting part of the city was also captured in the distance by our own mystery photographer, to where we shall return in the next edition of Mystery Album.

© Text and photographs unless otherwise captioned Always Worth Saying 2021

There are pleasures even the most adventurous of lives can deny a gentleman. Despite the tales of derring-do from his previous life more interesting (occasionally mildly exaggerated), there are places your author has rarely visited [more…]

In this second article about photography I wanted to talk about how I take “scenery” photographs, many of which often require setting up and/or travelling specifically to a place to take pictures and others which [more…]

There was a game that we used to play in the office called, ‘Would / Wouldn’t’. Every adult female would be attached either of the monikers. We even had cards made that we could hold up as [more…]