Cop junction lies just north of Charlisle, an English cathedral city on Network Rail’s West Coast Main Line somewhere between Preston and Motherwell, possibly within a giant spike in the border penetrating well into Scotland allowing for English levels of civilisation and Scottish levels of handouts.

The city is thought to be named after a corruption of the Celtic god Lugud (city of Lugud would be Caer-Lugud in Old Celtic) and a local eccentric’s favourite daughter, Charlotte.

The junction itself consists of two tunnels and a number of crossovers on two levels. These go to different places on different days. The Orient Express occasionally passes through on its way to or from Istanbul. Pennsylvania Railroad freights have been spotted from the lineside. A sleeper train connects the city with the Zambian Copper Belt on Tuesdays and Thursdays.

However, for a few weeks in late 2021, all lines head in the direction of the junction’s namesake, the COP 26 climate change Blue Zone in Glasgow. 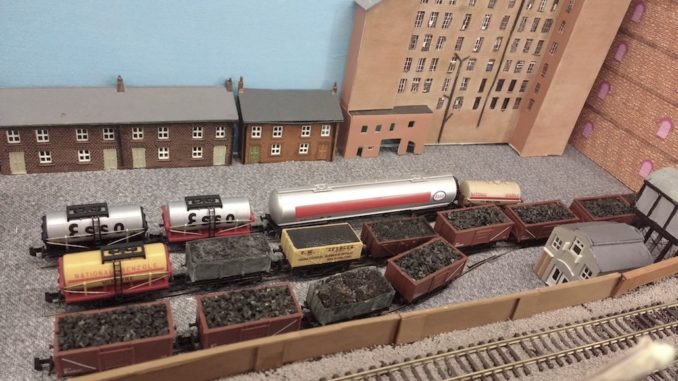 Coal, oil and butane are brought to the city’s carbon sidings (next to the plant food factory) to be recycled from harmful hydrocarbons into something useful. Adjoining the sidings can be seen the French consulate. Designed by a French exchange student sentenced to spend a summer in Charlisle, it sits next to three roads sunk into the cobbled yard and presently packed with coal and oil wagons.

Once in the complex, the carbon is unloaded and turned into gas via an oxidization process. The resulting carbon dioxide is distributed to plants and trees atmospherically by being vented up a big chimney.

Above are some recently discharged wagons waiting to be picked up and taken on the long trip back to the mines to be re-filled with coal. Don’t be fooled by the writing, the collieries are in China. The route a is carbon miles busting trip along the Trans-Siberian railway.

In the background can be seen the tower of St Dominic’s Cathedral. A recent archaeological dig in the ecclesiastical grounds proved that in the Medieval warm period vineyards flourished across the diocese. As the world has cooled, all the vines have died and been replaced by munitions factories and, of course, the carbon sidings and plant food factory. 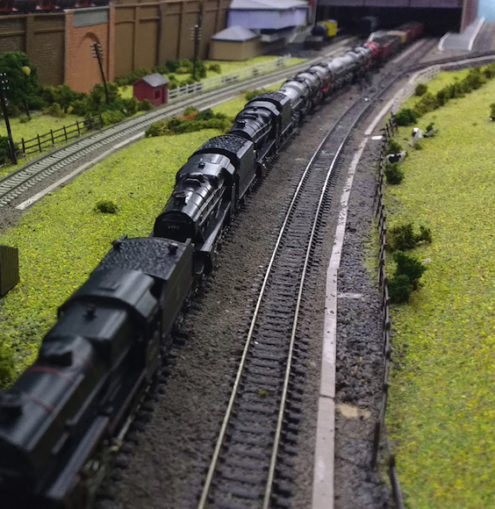 A triple-headed environmentally friendly steam train thunders through the cantilevered majesty of Charlisle Citadel station with another full load of coal and oil.

At the top middle of the photograph, the grey building is the power signal box. The local Bald and Bespecticalled Controller is not known for his prowess with electrics. The whole layout is sort of powered and signalled by only six wires – two of which don’t work. 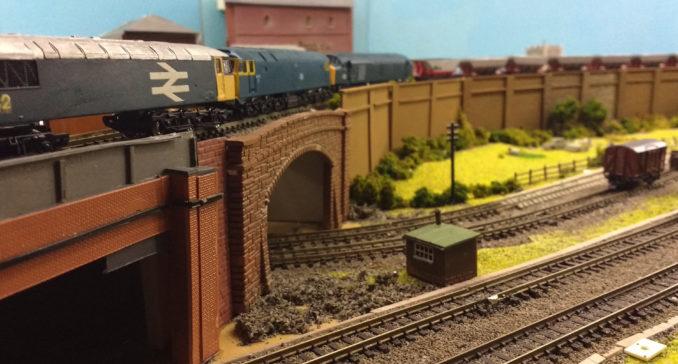 Simultaneously, on the upper level, a triple-headed diesel-hauled empty coal train pulls away from the carbon sidings in the general direction of Kentucky.

In the background, we see the Charlisle Marmalade and Baking Company. Exported all over the world, their high strength marmalade is often abused. If, on your own trip to COP26, you see a little Scandinavian girl sitting in a doorway cursing and swearing, chances are an empty bottle of Charlisle Baking & Marmalade Company’s Maximum Shred will be rolling in a frosty and rain lashed gutter nearby.

Also on the upper level but out of sight, is a seven road engine shed still in its undercoat. In front of that sits a row of buildings rescued from the demolition ball and moved to safety brick by brick (like London Bridge or the temple of Abu Simbel) when the aforementioned eccentric’s father’s old workplace was flattened to make way for an Aldi.

At the start of COP26, a private charter (1Z00 Glasgow Airport Private Jet Halt – Charlisle Carbon Sidings) came down the branch line all the way from Scotland. Hauled by two steam engines, it consisted of his Highness King Klepto of the Democratic Republic of Wakandazimbabwe’s private Pullman carriage and four bullion wagons.

The King, Queens, Princes and Princesses enjoyed a guided tour of the plant food factory and carbon sidings followed by a private visit to the munitions factory. By coincidence, the King owns the plant food works via a charitable trust in the Cayman Islands and his brother, through a Green startup headquartered on a solicitor’s shelf in Panama, has a controlling interest in the munitions plant.

Finally, we see a humble shunter towing a short cavalcade of redundant electric locomotives. Rendered useless by the power cuts, the catenary and overhead line equipment has been chopped down for scrap metal, desperately needed following the abolition of coking coal for blast furnaces.

The electric engines are being exported to China and Russia where they will provide low carbon transport on freight and passenger trains while the good people of Charlisle, as part of the new high-tech high-wage Green economy, revert to hunting and gathering and travelling by horse and cart.

“Hostage swap.” “Hostage swap?” I repeated. “Yes, hostage swap. You’re going to be late,” said the voice at the other end of our Dumfries Street townhouse street gate intercom. I shouted to my Chinese cousin, [more…]

Dancing With the Dragon, Part One

The Swaling, Part Twenty One

Our night of espionage, from my modest accommodations near to the notorious wall at Tangiers docks, had been cancelled. A much reduced number of comings and goings would pass unnoticed. The Gods of weather were [more…]