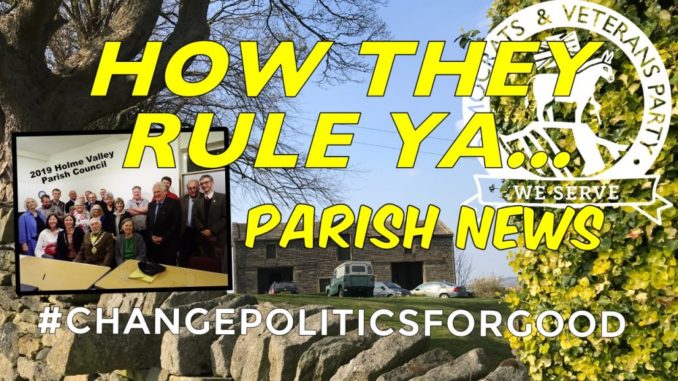 The only way to ‘Change Politics for Good’, is to acknowledge the magnitude of the problem and understand how easy it is to resolve. There are only two things you need – co-ordination and tens of thousands of good people. Why tens of thousands? Because if the challenge is to change politics for good, good people have to take back control in every nook and cranny of local politics – and that’s a lot of Councillors.

The relationship between the public and those in government is upside down. The public should be served – not dictated to and ignored, but the culture embedded in our politics has inverted this principle. That is why we in the Democrats & Veterans Direct Democracy Party are seeking to start the process of real change, now, in local politics…

Having advertised for a member of the electorate to represent the vacant position on the Holme Valley Parish Council (HVPC), I was summoned to a ‘Special Meeting’ to decide on a course of action to fill the vacancy.

The outcome was reported on the Parish Council website thus:

“Duggs Carre has been co – opted to serve as a Parish Councillor for the Upperthong Ward. As with the other 22 Councillors elected in May 2019 he will serve until spring 2023. His contact details are already on the website and we look forward to seeing him on some Committees very soon.”

For the benefit of the electorate of Upperthong, allow me to explain how their new Councillor, Duggs Carre, has been selected.

Insufficient nominations were received to fill the two Council positions for the Upperthong Ward in the May 2019 local Parish Council elections (4 yearly) such that a vacancy on the council was rendered necessary, with one Labour Candidate (the only one nominated) being elected unopposed to the Upperthong Ward. The Council advertised the vacancy and sought applicants to be co-opted onto the council. Two responses were received and distributed to all Parish Councillors prior to the special meeting.

One applicant lives in Upperthong Ward and claims no declared party political affiliation. The other applicant does not live in the Ward and is a member of the Labour Party.

A vote to defer the decision and refer the decision to the electorate was proposed, nominated and defeated by a block vote of Labour members. The subsequent vote on which of the two applicants to co-opt onto the council was proposed – each Councillor was afforded the opportunity to make comment prior to the vote.

Councillor Paul Davies (Labour) spoke well of Duggs Carre, his experience and his willingness to stand for election (Duggs stood for election in Wooldale May 2019 but was unsuccessful). The council voted to co-opt Duggs Carre, a Labour Party member who does not live in Upperthong to represent the Upperthong Ward, and we welcome Duggs to the role. Again the vote was a block vote by the Labour Party Councillors.

For the record, I advised the council before the vote that I would be voting for the applicant who lived in the Ward, who had clearly significant experience and skills that would have benefited the Council and I subsequently voted accordingly along with three other councillors.

In other news from the Council, the former Clerk to the Council who resigned at the end of last year has recently started a 27 month custodial sentence for VAT fraud relating to her alpaca farm business, as reported in the Huddersfield Examiner. This is a developing story, though having attended recent Council meetings I would take this obviously politically motivated follow up report from the Examiner, a well know Labour supporting publication with a large pinch of salt – more on this matter, soon.

Reporting on ‘democracy’ in the Holme Valley to the electorate…

Tasked with heading the challenge of confronting the declared CLIMATE EMERGENCY, Councillors and politicians throughout the land and all over the world are sounding the alarm bells and preaching to the people: WE MUST ACT [more…]

COVID In The Holme Valley – 2020 Summary

In early 2020 news started gaining traction in the UK of a virus outbreak in Wuhan, China. The virus spread to Italy and since then… … need not add to the worldwide noise of what [more…]

Whilst the public are affixed to the distractions of COVID politics, climate politics, Alec Baldwin, the ‘Far Right’ and structural racism, Extremist Rebellion cling like ivy to their focus –  implementing public policy in the [more…]