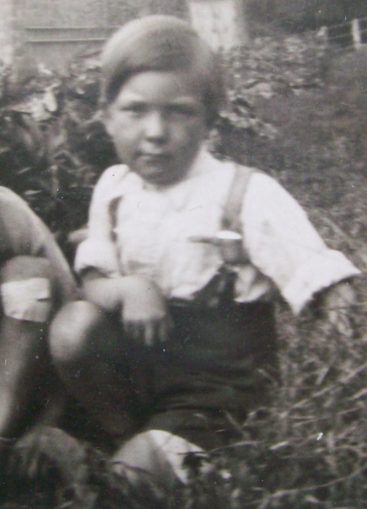 I was born in 1945, the war had just ended, the world was a very different place then.
As a child food was one of my primary concerns, it was difficult to find enough fuel for the amount of energy expended. It seems from a photograph. taken when I was perhaps five, that I managed to find enough to be fairly well covered.

Food at home was simple fare, heavy on bread and potatoes and light on meat unless Dad had been rabbiting. I remember the rules, meat was once a day and eggs or cheese counted as meat. Bread and butter was with real butter, bread and jam was with the bright orange hard margarine of those days. Sometimes food came at night, tins of dried milk or whatever with Military markings rather than the more familiar brand names from the local shop. Hunger pangs in the evening sometimes were sated by stale bread broken up and soaked in a bowl of sweet cocoa.
Toast was a staple too, stale bread, doorsteps of it, toasted on a long handled toasting fork in the intense radiant heat of a wood fire, seared with the heat to caramelise on the surface leaving the middle unharmed rather than being baked dry in the slow heating of an electric toaster. Liberally spread with dripping and  treated to a generous shake of salt and pepper it was a meal in itself. There’s a gap in the market for such stuff, a hipster café could sell that for a few pounds a slice.
Visits to relatives were not looked forward to, in rural Wiltshire old habits died hard, the local custom  still followed by elderly great aunts was to make rook pie which was disgusting enough and, horror of horrors, lamb tail stew. Dear God, the stuff we were supposed to eat. Luckily Mum never fed us with it at home, her cooking of conventional fare was bad enough.
The local shop was a galvanised iron shed tacked onto a house down by the church. Groceries were got for you from bulk storage, tins of biscuits, sacks of flour, sugar, currants and so on and weighed and dispensed in paper bags. Sweets were from big jars and sold in paper wrapped into a cone, but, with them being on ration and our family being poor they were not often had. With my big brother I worked the common racket, then, of  trading some ‘points’ from Mum’s ration book with a cut of any sweets purchased by other kids who had the  money but no points. Another source of sweets was to go to Sunday School and while away an hour looking at the  stained glass or watch the lad from the farm bake the mud and grass mixture on the soles of his hobnailed boots by resting them on the heating pipe and trying to pull it off in one piece. How I yearned for hobnail boots ! The big kids had them, you could slide on concrete, kick up sparks and make patterns in mud. I never  did get any, just normal boring shoes, hand me downs, or foot me downs, from big brother or from a jumble  sale. A  Sunday School stamp was currency, no kid went on the annual trip to the seaside without a full book  of stamps. As we never went on the outing anyway the stamps were of no value to us except as an item of trade. Aniseed balls were favourite, you got a lot for your money, eight a penny I think or two for a farthing. A  popular pastime was to scour the road verges or hedgerows in the hope of finding a beer bottle or pop bottle  which could be taken back to the shop to get the deposit back.

We used to go with Dad at the weekends or summer evenings, and sometimes with Granfer too, to catch rabbits. Dad had ferrets and we, big brother and me, were responsible for finding bolt holes from the rabbit hole complex and pegging purse nets over the holes. It was a job suited to boys, the holes were often under bushes or in bracken and needed a bit of wriggling to find. When the ferret did its job it was hectic work, grab the  rabbit in the net and quickly peg another one over the hole, all the time looking out for any rabbit bolting  from a hole we hadn’t spotted. It was a lost cause chasing them but sometimes a well aimed stone or stick  would bowl one over and allow it to be grabbed. I didn’t like ferrets, horrid stinking red eyed things that  Dad handled with leather gloves. They lived in a hutch up by the woodshed and we were warned ‘never to touch’;  as if we would; we knew they would bite our fingers to the bone out of pure spite and malice.

We had an annual cycle of foraging, winter was hard going, it was a swede taken from the field and carved up with a penknife, or some kale. On frosty days the stalks were easy to snap and you could peel away the outer  part to get the core, cold crunchy and sweet.  Spring saw the ‘challenges’, wood sorrel threw up new pale  green leaves. We would sit in a circle on the moss under the big beeches and, on the signal, start munching on  a handful of leaves. First to grimace or spit was ‘out’, that was repeated until you got a winner. The soft  pale green first flush of beech leaves could be used too. Primrose florets made a refreshing munch if you were ever dry mouthed when out on a foray, no trendy bottled water for us.
When the birds started nesting a new food source opened up, a visit to the lake for coot or moorhens’ eggs. We  knew that the eggs would be fresh if there were fewer than eight or nine in the nest and that they didn’t have  developing chicks in them until they had been ‘set’ by the bird after having laid the right number. The eggs  were hard boiled in lake water in the indispensable utensil of the day, the OXO tin; they were good eating, rich orange yolks, full of flavour and goodness. It was a risk getting them, the nests were often on branches  that dipped into the water and considerable acrobatics were needed to get to the nest on an adjacent branch so that the nest wasn’t submerged by the bending of the branch under your weight. It was a long job bringing them  back, one at a time, safe against cracking in your mouth, so that you had both hands free for climbing. 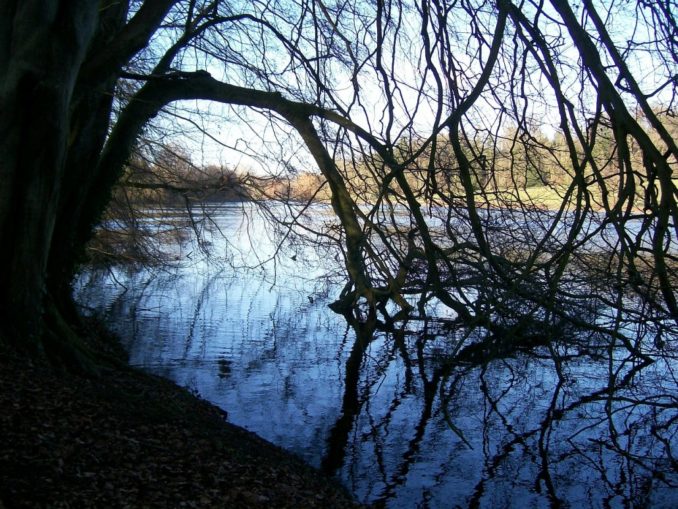 The lake and the run off river were the source of perch which were grilled on a stick over the fire. Trout  were off limits, you could get away with an arse kicking from the water bailiff or a keeper if it were just perch or roach but poaching trout was a hanging offence; not that Dad was ever hanged. Some other kids would  get pigeon eggs, but climbing scratchy resin-sticky larch trees never appealed to me as the eggs were too small to warrant the effort.
We would take tea and sugar and sometimes milk with us on our trips, water from the lake boiled up and the  tea, sugar and milk chucked in and stirred around. Cups were easily found, anywhere near habitation had a dump  of old jam jars or broken cups. A quick swill in the lake and they were judged plenty clean enough. One lad had the knack of being able to approach cows without them running away and was able to get some fresh milk.

Later in the year there were mushrooms to be searched for, it’s strange to think that they were once a prized  and rare find only enjoyed for a few weeks a year. There were berries too, blackberries to take home for Mum  to add to apples for jam, wild raspberries to be scoffed when found, beautiful sweet wild strawberries to be  found in the verges and savoured a few at a time to make them last. Damsons, purple bloomed and warmed by the  sun and the viciously sour sloes for another challenge game. One food that Dad showed us but which we kept a  secret from other kids was the pignut, you had to carefully dig down near the flower stalk and leaf, it had a  flower a bit like cow parsley and a leaf like a carrot leaf. If you were careful and lucky you got a small ‘nut’ the size of a marble perhaps, rub off the skin with thumb and finger, a quick clean on the front of your  shirt and you had a crunchy treat. They only grew in a few secret places and were possibly the best thing on the wild menu.
There were apple trees that grew where cottages once stood, apples green and sour. The wisdom of the time was that they ‘gave you worms’, they didn’t of course, most kids had them anyway and a bellyful of acidic apples  purged you of them and showed their presence.

The best time of year was hazel nut time. It was a race to get them before the squirrels, they knew that a  hazel nut before it’s ripened hard and dry is the food of gods and small children, sweet and easy work to get,  shake the tree hard, knick off the pointed end with your penknife, insert point of blade and twist, The outer  bitter skin is easily removed by pushing it off with the thumb. Later, after the first frosts, the chestnut would fall, once again the unripe white skinned nuts were the best; easy to eat but the finding of them in their spiky husks under the fallen leaves left your fingers throbbing and smarting.

Christmas time was for eating the cockerels that we had been responsible for feeding during the year, taking  cabbage stalks and other green stuff, corn, potato peelings boiled up with bran and caterpillars picked from  the cabbage patch up to the pen at the top of the garden. No turkey for us, I don’t think I ate turkey until I  was in my twenties.
Christmas time brought the legendary orange in the stocking, I can’t remember ever having one at any other time.

They were good times and until we moved house in 1953 we had no electricity, no mains drainage, no flush toilet and just a tap outside that was shared with next door.

Living like that is another story for another time.

How to make bread pudding

Something you hear often, usually the day before any holiday when shops might close for an hour or two, “we might need another.” The bread languishes in the bread bin or fridge patiently waiting for [more…]

How to cook rice perfectly

I know. I know. After covering a multitude of different exotic meals that one can rustle up in the kitchen, it seems a real anticlimax to compose an article on how to cook pretty much [more…]