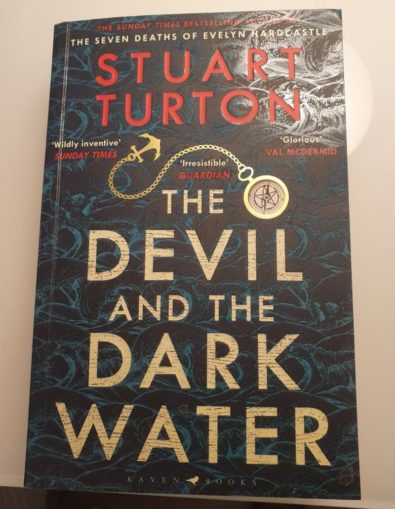 This is the second novel by Stuart Turton, his first being the excellent The Seven Deaths of Evelyn Hardcastle, which I reviewed a few months ago.

Turton has created another ‘whodunit’ story, this time on the high seas.  Set in the year 1634 the story follows Samuel Pipps (the world’s greatest detective) and his sidekick / bodyguard, Arent Hayes as they experience many mysterious events and gradually solve clues aboard the ship Saardam, on route to Amsterdam.  Think of it as a bit like Murder on the Orient Express, but set on the high seas.

Several story lines gradually come together during the trip and the story takes twists and turns as the pair try and work out the identity of Old Tom, a mysterious and devilish character who creates mayhem and misery wherever he goes.

Turton goes to a lot of trouble to describe almost everything in detail and as a result it’s quite a long book to plough through.  The journey on the Saardam seemed to drag on for a few too many chapters as the story progressed but each page revealed more information which added to the mystery and intrigue and I was genuinely looking forward to picking up the book each time to learn more.

The final chapter reveals the true identity of Old Tom and springs a number of surprises on the reader, who is led to believe things are not as they at first seem.  As with many ‘whodunit’ stories, it’s only in the final pages of a book does the reader come to understand the relevance of certain events described previously and the author will also only then reveal facts which explain why those events took place.

Personally, I didn’t enjoy this book quite as much as The Seven Deaths of Evelyn Hardcastle. I think the subject matter and setting wasn’t quite as appealing to me and there were too many character names to remember, many of them foreign.  That is not to say it is not a good book, because it is a very good one, but just not quite as good as his first one in my opinion.

I would recommend it to anyone who likes this genre of storytelling as I don’t think they would be disappointed.

Sovereigns have a long and interesting history; first produced during the reign of King Henry VII on 28th October 1489 by the Royal Mint on his instruction to create “A new money of Gold”.  Prior [more…]

Book Review: A Test of Time Series by David Rohl

Book Review – A Test of Time Volumes 1, 2 & 3 by David Rohl Just occasionally, a piece of historical scholarship comes along that challenges the foundations of our understanding of a period of [more…]

As GP has recently turned into an alternative source of information for the motoring enthusiast, I thought I would join Always Worth Saying and Phil the Test Manager in writing a motoring review. We took [more…]