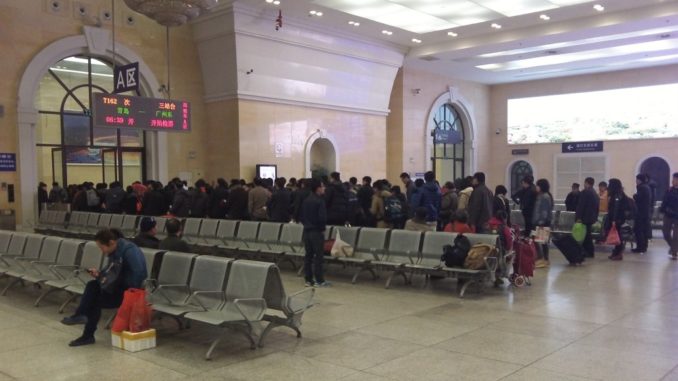 This is NOT about the Wuhan virus, but it is about Wuhan. In spring 2013, I travelled by train across China from Guangzhou to Qingdao in the north. Wuhan was more or less the middle point.

Arriving in Wuhan in the afternoon, I had originally planned to change to a night train, if there was one, heading in the general direction of Qingdao. There wasn’t. I was told by a fellow passenger I would be better off continuing the journey from Hankou, on the other side of the conglomeration. I took his advice and crossed town.

The three places straddling the Long River making up what the outside world and the Chinese railway system know as “Wuhan” — Wuchang, Hankou and Hanyang — are famous for the severity of both their summers and winters, and also of the flooding which afflicts this strange watery flatness, which is a bit like the Dutch coast, only hundreds of miles inland.

In 1954, the Wuhan area suffered months of inundation caused by persistent heavy rain that raised the river level to the top of the 30-metre levees protecting the conurbation, according to zhidao.baidu.com website. Over this long period, over 20,000 “critical situations” occurred. A massive deployment of soldiers and volunteers moved 3.6 million cubic metres of earth and stone to bolster the levees, in an endeavour involving 2,000 railway wagons, 72 tugs, 7,000 barges and thousands of tons of other shipping. Some trains ran on a submerged line and were unloaded at a submerged station, at Zhanjiaji. At one point, the Jiangshan embankment, a little “Great Wall” of 340,000 tree trunks and 10,000 metres of cabling was erected. According to my Chinese source, a staggering 200,000 soldiers allegedly lost their lives manning the front lines in this war against nature (a figure which is far higher than the death toll reported in English-language sources).

Another 4,000 people died in flooding in 1998. These disasters were one of the reasons why Beijing was so keen to get the Three Gorges Dam built, despite years of technical nay-saying and criticism from foreign environmentalists.

One in the long litany of Chinese catastrophes that nobody outside the country has heard of, the 1954 floods had only come to my attention because, one day, browsing in a second-hand bookshop, I stumbled on an old novel called The River Flows East. It was a translation of Fennu de Jiang (more accurately, “The raging river”), by Nan-kung Po (南宮搏), a mainland-born writer who became known as a journalist after moving to Taiwan. Illustrated in the 1950s Socialist style, with lantern-jawed heroes atop crumbling levees, it turned out to be, on inspection, a virulently anti-Communist story, which used the Wuhan tragedy to illustrate the reckless cruelty of Mao’s rule.

At the time, I found The River Flows East a curiously elusive work to track down online, in both Chinese and English, and when I later bought it, I found it to be a book of curious origin too. It was apparently written with the cooperation of the United States Information Service in connection with their Chinese book program, as a piece of propaganda. Well, I fell for it. I found this account of a community simultaneously fighting off rising waters and totalitarian tyranny a gripping and revealing read. Unfortunately, I have lost my copy, and cannot produce the string of gripping and revealing quotes I was planning to pull out at this point.

Which is a pity, as it is hard now to capture the spirit of those weirdly idealistic years of unending, rewardless self-sacrifice. What I can offer instead is a poem from my little collection of vintage Chinese propaganda booklets, which were distributed to sympathetic western institutions in the 1960s and 1970s during the Cultural Revolution. It is not about Wuhan, but does give a hint of the depths of misguided zealotry that were plumbed throughout China during these times.

After the Repudiation Meeting

Enthusiastic, energetic, we set off for night school,

Finding my hoe, I leave again …

But why is no one else around?

Why is our village street deserted?

Far off, I hear voices in the fields,

Nearer, in the moonlight, I see picks flashing,

Silver hoes thrusting in the soil,

One and all, we’re back at battle again,

Enthusiastic, energetic, just as at the night school.

These verses, carried in Chinese Literature 4, 1975, were by Wei Wen-chung, an “old poor peasant.” (Lin Biao in line 2 was a rival to Mao; he died in a mysterious plane crash in Mongolia). Here’s another one, from 1972:

Warm is the autumn sunshine in October,

When chrysanthemums bloom in splendour

Vivid crimson are the leaves of the maple

When Peking welcomes her many friends

How dear to meet friends both new and old

In our two great continents the sport will grow,

The shuttling silver balls have woven ribbons of light

Tying together the hearts of Afro-Asian peoples

Throughout my little collection of stories and poems, the standard of English translation is consistently excellent, especially compared with the abysmal norms of today. It was clear that an idealistic government had spent serious money on it, and also that a handful of gifted linguists from the English-speaking world were working for the wrong side.

Who, I wondered, were they? How were they lured away from comfortable Oxbridge halls to bleak postwar Beijing, to work in concrete-walled offices under naked lightbulbs? I imagined a team of naïve bookworms, who only ever studied Mandarin to bury themselves in Tang poetry. Or had they been academic revolutionaries? Either way, they wasted their talents on propaganda fodder that nobody except a handful of foreign sinologists would ever read. I wondered too whether, after Mao’s death, they had regrets.

It took the bus 90 minutes to get to Hankou station, travelling along very long, wide avenues which, 20 years before, I would have expected to find decked in red banners and Party icons. Today, it just looked affluent and bustling, if a little monotonous.

At Hankou station, they said I should head for Shijiazhuang, a big railway junction between Beijing and Shanghai, and take things from there. They added that it would have been wiser to have stayed at Wuhan Station, and that I could have got something there this evening if I had not trekked over to Hankou instead. Why on earth had I done that? “Local advice,” I growled back. There would be a single Shijiazhuang train from Hankou the following morning, the woman said, but I would have to be up early to get a ticket. I couldn’t buy one now — China is not very good with advance bookings. Grumbling, I took a room in a hotel near the station. It was a needless overnight. 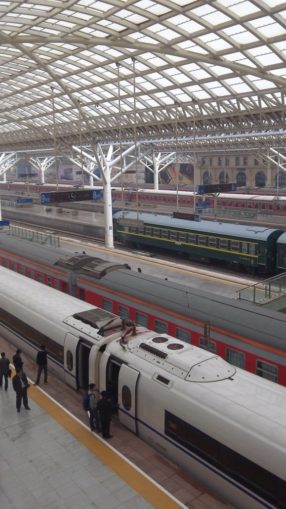 Nor was it a particularly enjoyable one. I had a snack-booth supper of stone-cold fried fish and vegetables. Rain pattered on the canvas roof as I glumly chomped; the surly vendor stared like a zombie at his mobile, poking with his free hand with chopsticks at sorry-looking trays of grub. No sooner had I put my baggage down in the hotel room than the lights went out — my first power cut in months. Down the corridor I heard a door slam and an angry male voice bawl out “Tamade!,” a heavy-duty obscenity containing the word “mother.” The power came back quickly, but I knew from experience could be on and off for hours. I called it an early night. [To be continued.]

Taken from my free travel book about China, Shenzhou, a copy of which can be read or downloaded at this website: https://www.itabibito.com/ (scroll down to the middle of the page)

One Night in Dezhou

In spring 2013, I travelled by train across China from Guangzhou to Qingdao in the north via Wuhan. Here, the journey resumes with an unintended stopover in the crappy end of Dezhou, an obscure industrial [more…]

The black and beur (French-Arab) communities have always had complicated ties with France. The early waves of European immigrants — the Italians, the Spanish, the Poles — came from proud, independent peer cultures, and the [more…]

взять займ на карту без отказа быстро без справок по паспорту More notes from 45 years of cycling How could any true traveller ignore the lure of a name like Thorne Waste? It could be [more…]