Fracking is once again in the news, once again you will hear of the dire consequences, the disasters and the earthquakes caused by drilling and fracturing the shale underground. It was suggested that the proposed fracking at one site, in Sussex I think, would cause trains to fall from a nearby viaduct.

If you ask people about the scale of earth tremors you will find that most have no idea of how they are measured, perhaps a vague idea of ‘The Richter Scale’.

They might be aware that the largest ever recorded was about a ‘9.5’ and the one that put the nuclear power station in danger in Japan was a ‘9.1’.

They might have read or heard on the news that the ‘safe limit’ put on the fracking test.

drilling recently was 0.5 on that scale.

Fair enough, say those who can do sums, that’s reasonable because it’s 0.5 over 9.1 and that’s about one eighteenth of the power that nearly wrecked a power station.

The scale used for earthquakes is a ‘log scale’, a logarithmic scale.  It is used to avoid the world supply of paper being used up all at once * 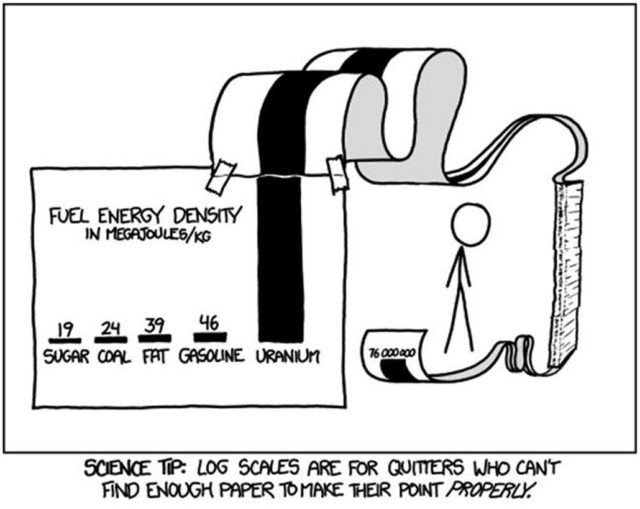 Before calculators were invented schoolchildren were instructed in the use of logarithms. These were used to calculate multiplication and division problems, an easy way of doing hard sums without the labour plodding through multiplying or dividing each bit in turn.

Each pupil was given a book of ‘log tables’, some clever people had done all the workings out, done the clever bit, the pupil had to look up the ‘log’ of a number and write it down, then the log of the other number, and add it to the first if multiplying or subtract it if dividing. The result was a number which was looked up in the ‘antilog’ part of the book, the number found there was your answer, the decimal place position was then decided.

a simple one is at Log and Antilog Calculator

When the pupil was more advanced, probably at college or in A level studies, the ‘slide rule’ was used. This device had log scales engraved on it and some fiddling with the slide and the cursor made the adding up, and looking up, easier but less accurate (but accurate enough for real world situations).

Simply stated, the log scale used for earthquakes is such that each number along the scale means it is ten times more ‘powerful’. Add zeros as you go along, a 2 is ten times a 1, a three is a hundred times, 4 a thousand times and so on.  A 9.1 has nine zeros, that’s a billion times a 1.

Doing it this way you can produce a graph or table with numbers going from one to ten, a lot more convenient and space saving than one to ten billion.

The number of 0.5 the so called safe limit, is a ‘log of the real number’ Look this up in the on line ‘antilog calculator’ and you get a ‘real’ number of 3.16.

You will see that a tremor which can just be felt in ideal conditions is 125/3.16 times, which is about forty, times the power which has been said to be the ‘safe limit’.

There is another scale that is used to scare people, a ‘linear’ scale, ordinary proper numbers, not logs, but applied to deceive. We’ve all seen the pictures of wells drilled through water tables. This is said to be very dangerous if it’s a fracking bore hole, strangely it isn’t a problem when sewers pass through or under water tables. The water table is usually shown as a thick layer just under the surface and the shale layer just below that, it will not be drawn to scale, to save paper or to deceive?

N.B Logs in this article are to base 10, don’t worry your head about it, there are also logs to base e, for smartarses.

Question: Do snails understand mathematics? Ok here’s an idea. Start with the value 0 and 1 and then apply the following rule. Take the last 2 numbers you have and then add them, to make [more…]

Ages ago I figured out what to do if you wanted to cut two video scenes together and have them moving at the same pace. I thought you could do some bit of film where [more…]

The Spitfire, of course, Part 2

A couple of years ago I wrote an article here concerning the design of the Spitfire and questioned its status as the best fighter of WWII. I mentioned in that article a follow up piece [more…]