My own (reprinted) 1887 Bradshaw’s Guide shows an eclectic array of east coast shipping services connecting ourselves with continental Europe before the days of the noisy and inconvenient aeroplane. Goole to Dunkirk for 15 shillings (75p). Grangemouth to Amsterdam, 40 shillings, ‘including provisions’. Grimsby to Antwerp, 15s or 7/6. Perhaps the half-price fare involved a hammock swinging above the beasts of a cattle hold?

Elsewhere, Barrow was connected to Belfast, Londonderry to Glasgow and even Port Carlisle to Liverpool.

The giant map provided, informs me 575 miles lie between Hull and Copenhagen. A full 1225 separate Grimbsy and St Petersburg which, en route, would take in our mystery family’s ports of call at Gotland, Stockholm and Helsinki.

Last time, to try and identify the vessel they were travelling on (and without much success) we researched the Finnish shipping companies. This time, the British.

Those Hull to Scandanavia services were provided by the Wilson Line. On page 423 of Bradshaw, they boasted of “Hull to Sweden And Norway Carrying The Royal Mails.” Hamburg was reached weekly. Jersey, bi-weekly. Danzig (modern-day Gdansk), Stockholm, Stettin, Riga, and Reval; ‘steamers weekly during the season’. The season being mid-summer when days were long and passage ice-free. Further afield, River Plate, ‘to suit the trade’. Constantinople and Odessa, ‘steamers about every twenty-one days’.

“NB Yachting cruise steamships Juno and Domino are intended to be dispatched on cruises to the Baltic leaving Hull 10th & 27th August.”

As for prices, St Petersburg or Riga, £17 7/6d first-class return with victualling (food and other stores) set at 6/6d per day.

Forty years later, our mystery family were on their own Baltic cruise by which time the ships and shipping companies had changed. The Wilson Line became Ellerman Wilson in 1916 when John Ellerman bought the Wilson Line’s 67 short-sea vessels and access to their associated routes. The company had its own distinctive livery of red funnel with black top above dark green hulls, none of which is visible in any of the photos.

In my day, roughly halfway between the 1920s and now, the United Baltic Company scheduled a Sunday Hull to Helsinki service (except for every third week) arriving in Finland on Wednesdays. The advertised vessels were the MV Arcturus, MV Baltic Eagle, MV Baltic Progress and MV Finnmerchant. Last week we read of an SS Arcturus, broken up in 1956. Arcturus is a common name in shipping, being a star of both the Ursa Major and Ursa Minor constellations beloved to navigators.

Unfortunately, none of this helps to identify the mystery ship our mystery family were travelling on. Looking for clues, we shall go through the photos one at a time, in the order they appear in the album, and say what we see. 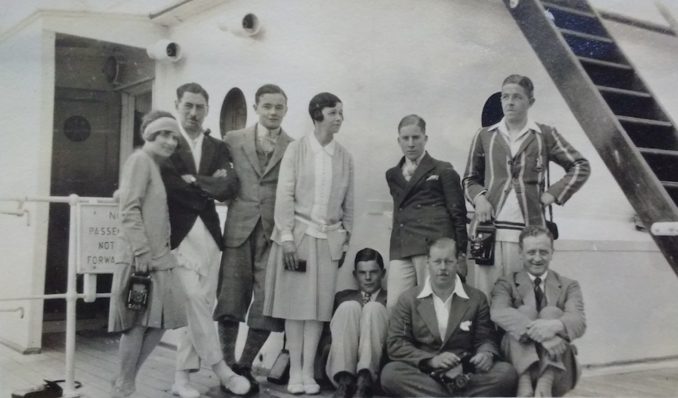 Here, our mystery travellers are gathered for a photograph, appropriately armed with cameras, perhaps taking it in turns to snap the group.

Note the sign in English to the left, presumably reading something like, ‘No entry, no passengers allowed forward of this point.’ Perhaps this is the bridge, with a ladder to a higher level, on the port side of the ship? Is that a cricket jacket or boating blazer worn by the gentleman to the back right? And a distinctive badge, perhaps of a horse’s head? 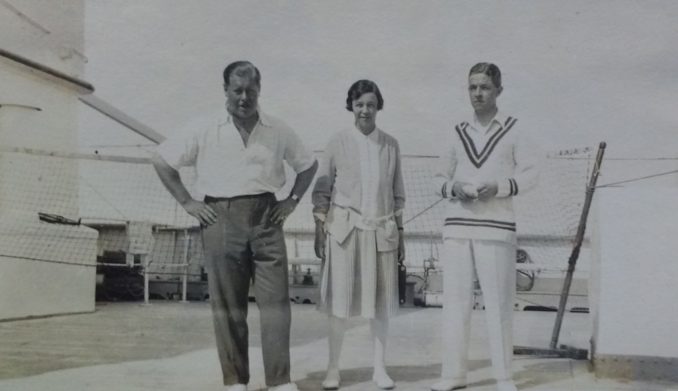 The badminton net suggests cruising rather than sleeping above the cattle. Note the flannels and cricket jumper with distinctive lining to the V neck, cuffs and bottom trim. They will be particular to a club, but which one? To the left, we observe another ‘No entry’ notice suggesting that to be the other side of what we assumed to be the bridge. There isn’t another set of ship’s steps in sight but an upper black line, similar to one in picture one, can be seen. This suggests a badminton court behind the bridge with picture 2 taken soon after picture 1, as the subjects are identically dressed except for the removal of a jacket from the chap on the left. 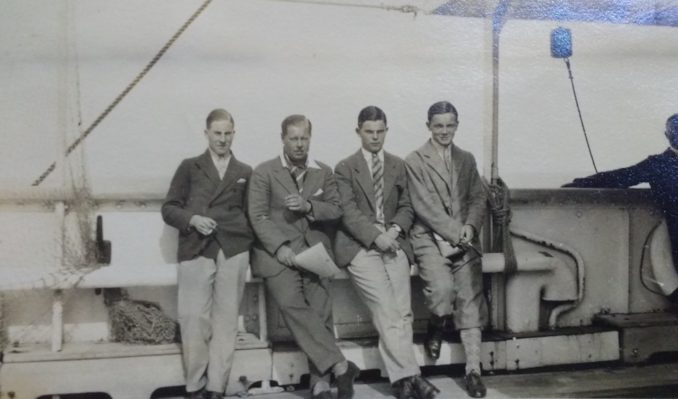 Picture 3 is not much help in identifying the vessel but might assist with the people. Are these a family group? A father and three sons? The two on the right look like brothers. Continuing a sporty theme, a pair of new-fangled plus fours can be seen. Popularised by Edward the VIII in the 1920s, while Prince of Wales, plus-fours are so-called as the trouser ends four inches below the knee, keeping them usefully out of the way on the grouse moor and golf course.

Note the thin spas in the background which connect what we are going to call the promenade deck with an upper ‘sun’ deck. 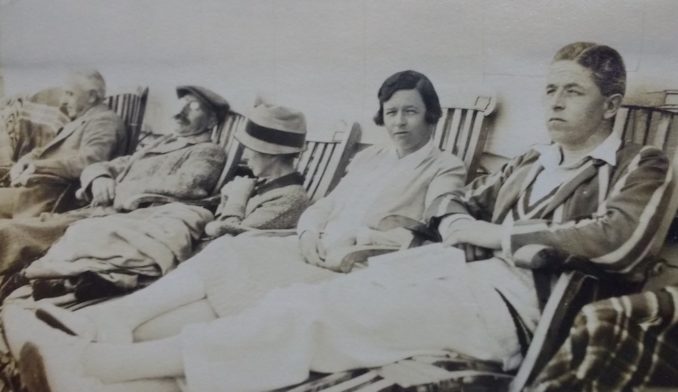 Out in the sun, but judging by the extra layers and hats, not in the heat, we see sports jacket and cricket jumper man again. Blankets are at the ready. Note chairs but no cushions. In the class obsessed pre-war world, our passengers are travelling first-class but with a lower case ‘f’. Plumbline partings are worn by both sexes but only in the male are they kept in place with Brylcreem. 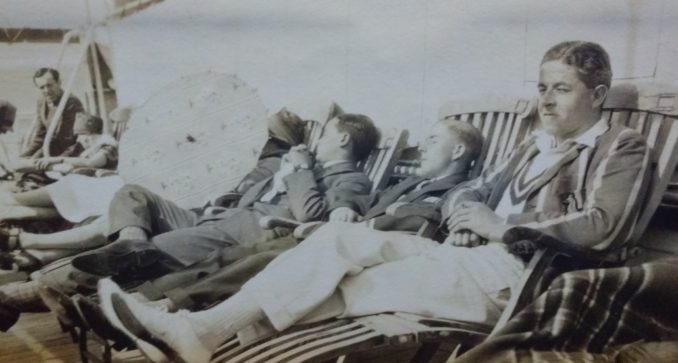 Same seats and the same blanket over the chair nearest the camera but different people (apart from jacket and jumper man) are taking it in turns to get a bit of sun. Note the flat parasol umbrella and canvas screen behind for shelter.

The girl with a hairband (from picture one) poses on deck. Both the canvas above, and the shape of the windows, suggest she is on the promenade deck. As we shall see, promenade deck windows are black and squared with a slight curve to the upper side and are held open with a small latch.

The drop to her left might be a lower, open, internal level, maybe for cargo? 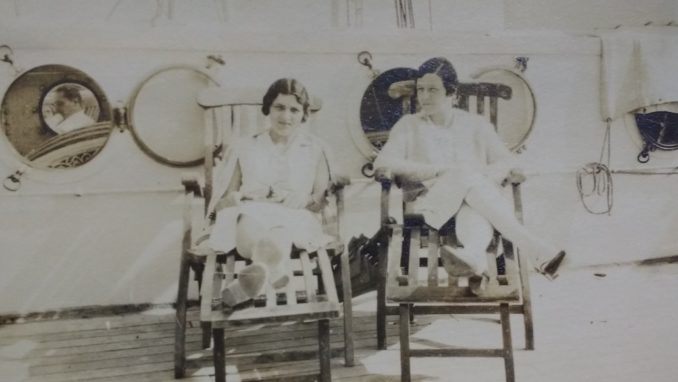 Picture seven shows some of our subjects on the sun deck sitting in front of wide portholes. Above, fresh air and a hint of rigging emerge. The room behind is low and narrow. Notice how close the man through the porthole on the other side of the ship appears to be. Too low to stand in, the room contains a curved ornate awning. I wonder if its purpose was to provide ventilation and light to the deck below?

Looking here, you can spot a more modest ceiling indentation meant to provide ventilation to a dining room. Something similar sat inside the Finnish cruise ship Wellamo’s restaurant. 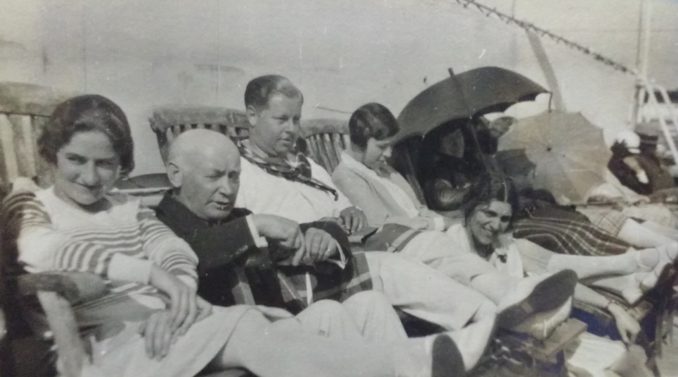 Back on the sun deck, it appears rather brisk. 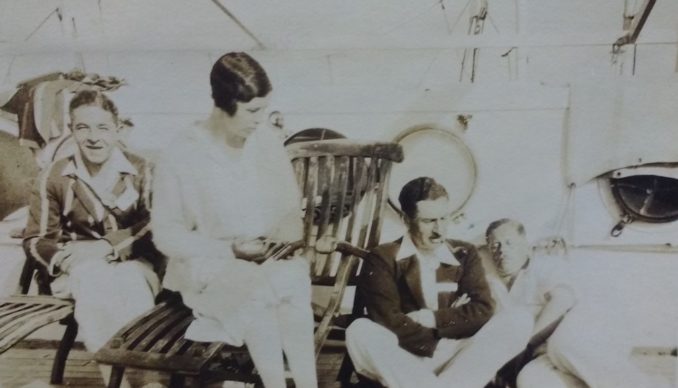 Sun deck again with the ceiling looking even lower and with spas, wires and fresh air more evident. Sports jackets, open-necked shirts and flannels are worn by the gentleman. And do they have name badges on the left breast? One suspects in those days sport and competitions passed the time rather than mobile phones and electrics. 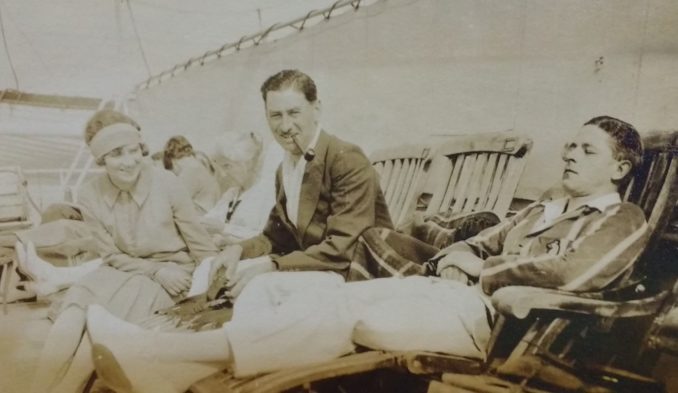 Remaining on the sun deck, to the left-hand side and at right angles, we can see the ribbed underneath of a lifeboat. This suggests the canvas and chairs face fore and/or aft with portholes and chairs pointing port and starboard. On the right-hand side, there’s the sports jacket again with a horse’s head motif. To the left is the girl with the headband. In the middle, an older chap with a pipe, also featured in photos one and nine and, as we shall see, eleven.

Looking closely at the deckchairs, there is a little box that might contain a card. Although empty, I wonder if chairs could be numbered for deck service or reservations or placing of requested blankets? All the boxes are empty, again suggesting first-class rather than First-Class. 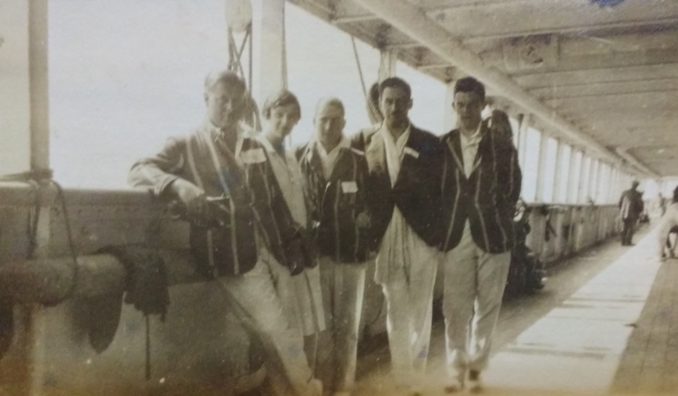 A group photograph on the covered promenade deck. All the gentlemen are in sports jackets, perhaps with name badges attached. No cricket jumpers, rather open-necked shirts above cricket-style flannels. The man with the pipe has lost the pipe but wears a long scarf. Are they wearing plimsoles? To save the deck? No trainers in those days, clogs, segs and, for the upper orders, high heels to batter the woodwork with.

Counting the spas, which disappear to a vanishing point, I would guess at 30 plus. Counting them on the old SS Arcturus, there were only about 15 on a vessel of 2000 tons, although a lower deck interrupted. There were 30 plus on the SS Titania (100 metres long) but it was sunk in the First War.

Another possibility would be the Finnish SS Oberon but her upper deck and bridge (and the upper decks of all the Finnish ships) seemed to have been painted a dark colour (or were wooden). 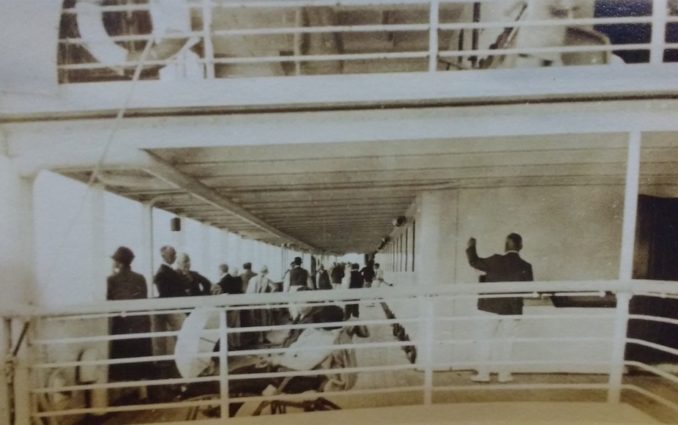 This is where we see two decks, though infuriatingly we can’t read the name on the life belt. Square windows line the promenade deck and small portholes sit close to the decking, presumably to let air and light into second or possibly immigrant class.

The lower round portholes were missing in picture 6 which suggests, as does the canvas above her, headband girl was pictured there standing between the bows rather than on one side of the ship.

A game of quoits on the promenade deck with the lower portholes more noticeable as is the sheer length of the vessel compared to some of the competition.

After an exhausting, if not exhaustive, browse of Elleman Line ships, I had the bright idea of looking at scale models instead which allowed a more comprehensive view of their layout from different angles. City of Nagpur fitted the bill with space behind the bridge, plenty of ventilation funnels, an upper deck with all kinds of nooks and crannies for sunbathing and a lower deck for cargo.

Although used on a different route, one of her sister ships, City of Paris, was usefully built in 1922 and was definitely used on Norway to Hull.

As I daren’t check the comments without accidentally reading some of them, if you know better than I or are a whizz with ships and have spotted something I should have, drop me an email at alwaysworthsaying@gmail.com and help to solve the mystery properly.

A Walk Around Lee Circle

In his seminal commencement address to the University of Texas’s excited class of 2014, US Navy SEAL and four-star Admiral William H McRaven reminded his audience that, if they wanted to change the world for [more…]

A Very British Message to Garcia

Previously, my colleague Fred Brownbill wrote of US Navy SEAL Marine Commander Brian Bourgeois, commanding officer of SEAL Team 8, who was killed in the first week of December 2021 while fast-roping from a helicopter [more…]