Everyday dental life in the Clinic was fairly normal. Normal that is if I had been used to working in a practice with limited equipment and materials, alongside three other dentists, one of whom had the skills of a first year dental student and another who, if working in the UK, would have at least been struck off if not imprisoned.

My patients were a mixture of oil workers and their families, both ex-pats and locals, embassy people, the clinic staff and various security bods. On the face of it it was a pretty easy working day, seeing perhaps 10 patients a day compared to the around 40 I had been seeing in the UK back then. Everything took bit of time due to my poor Arabic but Karen and Suzanne could speak and translate better than me so we got by.

However, 10 patients a day seemed like a hectic day compared to during Ramadan and on the odd occasions it rained.
During Ramadan hardly any locals came in for treatment unless having real problems. Fillings were a no no due to the water needed for the drills which they couldn’t swallow if not sucked away, and so really only emergency extractions were done. I tried not to do these just before lunch as as it resulted in 5 minutes of hawking up blood and phlegm into the spittoon. Nice.

(At Eid it was a bloodbath. Sheep and goats were slaughtered in the streets. Some places one, some places many. It was barbaric and the blood stained the roads for days. The fact that we per-mit halal slaughter in the UK astounds me.)

The rain was another thing that kept the patient flow down. Not the rain per se but the fact that in our part of town at least, the drainage system was so silted up that a short downpour resulted in no time with a few inches of standing water that the locals didn’t venture out in.

So what to do when patients were in short supply?
Our clinic had some Western reading sent in. All well out of date mind, but better than nothing. We got The Guardian, (I shit you not), Newsweek and the occasional motoring magazine. The problem wasn’t so much that they were out of date, more the challenge of reading anything after the cen-sors had got hold of them. Either verboten things were inked over, giving you half a chance of de-feating the censoring by holding it up to the light, or completely cut out.
Unsurprisingly the main things cut out were pictures of bodies and body parts, mainly of the female variety. No doubt somewhere in Tripoli scrapbooks were changing hands for a fair few Dinah.

So we read a bit and had a laugh.
Abbass, the ‘head’ dentist, did not like the girls having a laugh. In fact in all seriousness he told them they must not laugh. He was an idiot and misogynist, and treated the nursing staff with complete disdain. He resented me, as he had been expecting to be a shoo-in for the title ‘Gadaffi’s dentist’ after the previous chap had motorbiked away, but I’d been given the role having just pitched up in the country.
Some of his dentistry was potentially lethal such as giving young children who might be a bit unco-operative, intravenous barbiturates for fillings. Trying to explain things to him was impossible. He knew better.

We spent a fair bit of time in the canteen where we could eat for free. There were a couple of Su-danese blokes working in the canteen washing up and clearing down. They were tall and incredibly thin, black as the ace of spades with heads like the Mekon. They could have been extras for a Live Aid video. Nice enough guys but basically slaves, they weren’t paid and their beds were a couple of mattresses down in the basement. All their food was for free though and they seemed reasonably happy with their lot.

The second time I was taken to see Gadaffi at the barracks I had to get his old failing bridge off.
You can either drill off an old bridge, which can take forever and is bloody tedious, or use a bridge removing tool which, although not particularly nice for the patient, can make life a lot simpler.
This is a device you hook under the bridge with a weight which you slide along to knock the bridge off. Imagine me hitting Gadaffi repeatedly in the mouth with a small toffee hammer and you’ll get the idea. 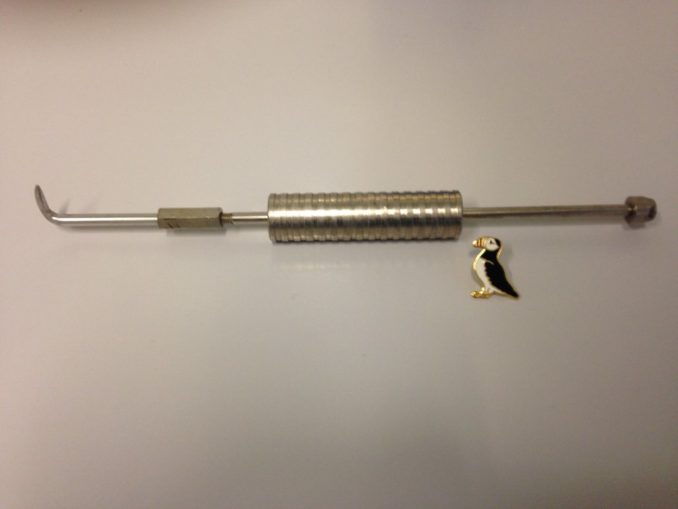 Gadaffi had a bridge remover which worked very well. I say ‘had’ as I nicked it. I occasionally still use it and it makes me smile.

Anyway, his bridge was off with no anaesthetic needed and I tidied up the teeth. I just needed to do a couple of impressions, record his occlusion and shade, cement the old bridge as a temporary and the job’s a good’un.

For some reason Karen decided that this would be a good time for her to completely forget how to mix impression material properly.
Mix two pastes together, stick it in a tray, pop it in the mouth and hey presto, a couple of minutes later it’s set and you can take it out.
This presupposes that the pastes are mixed in the correct ratio. Three minutes, four minutes, five minutes and it was only barely setting. You are committed at this point, as to take it out too soon results in soft paste swishing around all the teeth. So we just hung on whilst Gadaffi was filling up with saliva.
It finally set, we cemented the old bridge as a temporary and we were done. Mr President, (which is how I addressed him), was fine about it.

Off he went and I was shown through a door into an adjoining room with Karen being left in the surgery. In the room I was in I was brought some food. All very nice. This was the usual way our appointments ended. A couple of times Gadaffi came into the room and had a little chat whilst I ate.
More along the lines of how was I finding Libya and where I lived in the UK rather than did I agree with his policy of imprisoning HIV sufferers and whether LSE would award his son Saif a PhD with-out him handing over £1.5 million.
After I had finished I exited through another door to the outside where Karen or Suzanne would be waiting in the car with any booty they had snaffled.
One time as I left, Gadaffi was outside and he beckoned me over. I nearly tripped over something and looking down it was Yasser Arafat. Gadaffi introduced me and I had to bend down to shake his hand as he was so tiny.

Food in Libya was not too bad. In the evenings we cooked for ourselves and one another in the compound. There was great seafood to be bought in town although the meat hanging up in the shops covered in flies could be off-putting.
There was a lot of camel about, including heads and legs that we occasionally ate although it would not be my first choice off a menu.
But a word of advice. If you ever have a chance to eat camel testicles, no matter how they are pre-pared, don’t. I have done the taste and texture tests for you so you don’t have to. You are welcome.

There weren’t too many restaurants that were worth a visit, but a couple, ‘The Lebanese’ restaurant and ‘The Fish’ restaurant were regulars. There was also an ex-pat club in Gargaresh district which some of us had access to. It did decent food and you could buy wine to go with it. The wine was awful and you had to pay exorbitant prices in Western currency but it had a pool and was a good place to take girls.
The Old Town was a good place to eat street food. I’ve always enjoyed street food on my various travels but I know many people avoid it like the plague. Eat like the locals and eat cheaply. Kebabs, couscous, tabouleh for a few dinah. Just the ticket.
The Old Town was also good place to get a haircut and the occasional shave. Sitting in a small room with a Libyan holding a cut throat razor to your neck? What could possibly go wrong.
How times have changed.

We reach August 1940, eighty years ago. Things still looking bleak for the Brits and it doesn’t really improve this month and we moan about the lockdown, albeit with some justification. The Italians had been [more…]

We reach July 80 years ago, it was quiet on the ground in North Africa but the navies were as busy as ever. There was no news from East Africa and precious little from Greece [more…]

80 years ago this month things were quiet in the actual desert. After the initial British skirmishing that was an attempt to convince the Italians we were much stronger than we really were and the [more…]