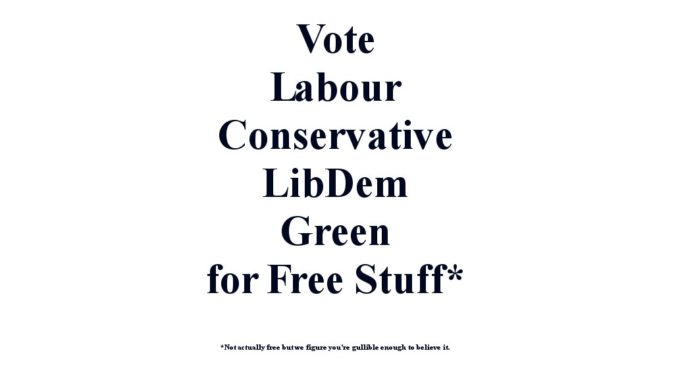 As my regular readers know, most of my essays are forays into challenging economic issues. They reflect my own attempts to gain an understanding of their underlying principles.

But there’s a lot riding on the coming election, perhaps more than most of us realise, so here are some personal reflections that are only tangentially “economic”.

The Greens have ambitious and virtuous policies, yet some voters remain circumspect when beholding the immense sweep of their programmes, and their proclaimed urgency. Few of the uninitiated are sufficiently qualified to reason, objectively, on the fears that motivate their agenda – beyond such palpably obvious phenomena as the horrific levels of plastic waste. Consequently many people facing the coming election have prioritized what they consider to be the immediate threats.

The Lib-Dems have strayed a long way from their founding roots. I remember many stalwarts in the old Liberal Party, and their principles, and gave them my unreserved support. But the current leaders have lost their bearings. And any claim to be “democratic” is farcical in the face of their sworn determination to reverse the democratic referendum result. Their doorstep canvasser’s predictable words yesterday were: “Ah, but we know so much more now about what will happen if we leave the EU, that we deserve a new vote.”

Beyond some mumbling about job-protection, he wasn’t able to answer my follow-up question: “Do you really know what will actually happen when we leave the EU?”

Their doorstop campaigning has been relatively low-key, and their manifesto is suitably anodyne. TV presenters, festooned by the usual cosy circle of smug know-alls, are at pains to tell us that they invited the Conservative Party to supply a panel member, but were told “no one is available”. It seems that at last they are seeing sense! They have learnt that when no one is listening, there’s no point in adding to the clamour.

As for policy, apart from Boris Johnson’s unequivocal determination to get out of Europe, there is little that’s groundbreaking, novel or particularly controversial, and they have clearly decided not to compete in a spending war with other parties. Although Boris tends to keep his position on things that matter under wraps, he has been explicit in his belief that only a solid economic base can provide the assurance we all want of the continuation of the NHS, and an ability to provide for genuine social needs. He has also made environmental issues a central pillar of his policy proposals.

Margaret Thatcher similarly eluded the lazy convenience of political labels – until, out of sheer national necessity, she embraced the economics of production and supply. She could see, as did President Reagan, that only by abandoning the idiocy of Keynesian demand management policies – and the strife that always accompanies them – could the economy be salvaged.

We don’t know the extent of Boris’s real grasp of economics, but there are hopeful signs – such as his emphasis on civil freedoms, free markets and free trade, and he clearly knows how to be persuasive when it most matters, such as when negotiating with EU Commissioners.

Labour’s manifesto intentions, by contrast with the others, are commendably transparent, although the consequences of actually carrying them out may be less obvious – especially to younger voters.

They fully concede that their spending promises would massively inflate the nation’s debt, or would require taxes to be raised per person by a sum equivalent to an average month’s pay. Their own costing of these promises shows they have abandoned their “fiscal responsibility rules”, doubling their 2017 manifesto pledges with an annual borrowing commitment of £55 billion – excluding the cost of the party’s signature nationalisation plans.

On the latter point we should remind ourselves that uncompensated nationalisation is de facto confiscation.

Labour’s linguistic fare abounds with the word “free” – whether TV licences, bus passes or winter fuel payments. Economic law requires that goods and services provided by people cannot be “free”, but have to be paid for. So Labour’s “free” is a euphemism for “out of taxes borne by people who work” – although the canvasser on your doorstep is unlikely to put it that way.

Capital “gains” for tax purposes are not real gains; capital gains tax is effectively a tax on inflation. The Labour Party has, however, promised to increase the rate of capital gains tax so that it equates to the taxpayer’s marginal rate of income tax – which could in many cases represent an increase from 10 or 20 per cent to 50 per cent. On inheritance tax, they will do away with the main residence exemption, meaning the IHT exempt allowance will fall to £325,000. Their proposed tax on holiday homes will be equivalent to 200 per cent of the home’s prevailing council tax.

As the Institute of Fiscal Studies’ Director, Paul Johnson, has pointed out, despite Labour’s claim that most “ordinary” people will not be affected by their tax changes, people of “average income” will indeed suffer higher tax burdens. Labour’s claim is based on their intention to raise the rate of corporation tax to 26 per cent from its current 19%.

The essence of Labour’s tax plan is to target companies rather than people: companies, being profit-seeking, are fair game as tax targets, so the thinking goes. But this glosses over the fact that companies collectively constitute the single largest employers of people in the country, and their post-tax undistributed profits constitute the savings that pay for research and investment in new technology, returns to investors, and pensions. Under Labour’s proposed regime Britain’s companies will have to endure the most punitive corporate tax system in the world.

Their proposed “wealth” tax may appeal to people who are simply “anti-rich” on principle – yet any tax on assets is a brutal bludgeon; when there is no related cash flow it is essentially confiscatory.

Last week, the Labour Party voted in favour of new policies that would add VAT to private school fees, restrict pupils’ access to higher education and redistribute their endowments, investments and properties to schools in the state sector. Both Jeremy Corbyn and Karl Marx, incidentally, attended private schools.

Labour’s manifesto says companies would be required to have one-third of their boards composed of elected “worker-directors” sitting alongside directors appointed by shareholders. “A third of those boards will be workers themselves” John McDonnell told BBC Radio 4’s Today programme – the implication being that the other two-thirds of board members are not “workers”!

He continued: “Within that company they’ll have trade union rights restored, and sectoral collective bargaining to protect their wages. On the supervisory boards of those companies, or on the unitary board, whichever the company opts for, there will be consumers represented as well. This is the point I’m making: we’re democratising our economy.”

He also wants to lift restrictions on trade unions imposed in the 1980s, bring back secondary picketing and national collective bargaining for wages “because we’re democratising the way these corporations work and are [making them] more accountable.”

It all sounds pretty rottweilerish to me. How about you?

Does a coherent, workable economic philosophy underpin Labour’s plans? For example, do you detect any planned waste elimination? Any trimming of unnecessary government jobs funded by taxes?

No. Labour plans to give all public sector workers a 5 per cent pay rise – as well as a 4-day working week.

This strikes me as pure vote-catching posturing. How would it be paid for?

I’ll tell you. Implementation of Labour’s manifesto will be paid for by many long years of austerity – real austerity – the like of which will give that word a host of meanings that today’s younger voters cannot even imagine. But will never forget.

Today’s Election – What it’s Really About

The looming election appears patently divisive.  But it isn’t the election itself that’s doing it. The division arises from the starkness of choice confronting the nation. The very word “di-vision” almost evokes a condition of [more…]

Savings must come first – cash is a mere diversion

I am typing this in the SAA Business Lounge of Durban airport, awaiting a call to board a flight to Johannesburg, where we are due to take the last flight to London before all international [more…]

Just to explain, I was more incensed than usual, just very recently, at a propaganda sheet pushed through my letterbox. It was from my local MP, I’ve not named the constituency but it is easily [more…]