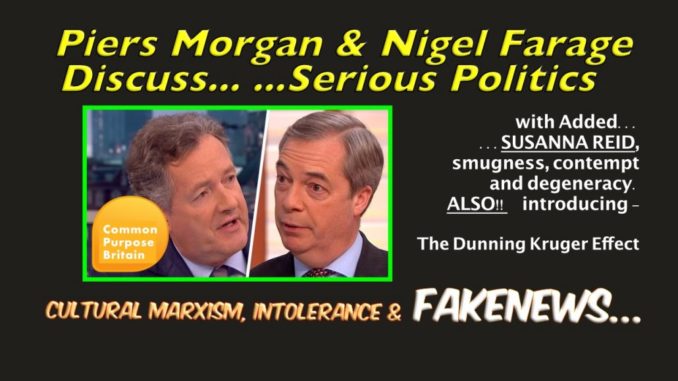 I’ve just watched an interview with a national Party political leader. The interviewers were Piers Morgan and Susanna Reid. The interviewee – Nigel Farage, Leader of the Brexit Party. Before you watch it (link below), please read this article…

National debt approaching £2Trillion plus unfunded liabilities – multiply by three? Five?  No end in sight for our EU nightmare? Energy policy shambolic, roads congested, trains under capacity, borders leaking, crime rising, schools overflowing, healthcare mess, HS2 and a climate emergency…  …lots to cover, and Trump is in town too for the 75th anniversary of the D-Day landings!

And what are Piers and Susanna up for on a Monday morning? – Sexual relationships. That’s what was on Piers’ and Susanna’s minds. More accurately – male on male bumsex relationships and people’s differing views on the matter, ethical and scientific.

Let me say right off the bat – I don’t care. What you do in the privacy of your own home with other consenting adults – I don’t care. Unless I’m one of them then I’m not in the slightest bit interested. And which team I bat for is nobody’s business but mine and that of my friends. More pointedly, I don’t wish to talk about it publicly and even more pointedly, I don’t wish for you to talk about it in earshot of my young children thank you very much!

Yet we have no choice, for Piers and Susanna are not broadcasting on Channel 4 at 2300Hrs to a niche audience. They are prime time household name broadcasters on ITV’s Good Morning Britain, steering the conversation towards the subject matter they, or their employers, choose. However, despite not caring about the private aspects of consenting adults’ lives– I do care sufficiently about children’s innocence to comment on this matter further and I object to the issue of sexuality being thrust into the political arena and the consciences of innocent developing minds through national broadcasting outlets.  This is Cultural Marxism in action and this has an impact on children about which we should be thinking more thoroughly. ITV chooses to act in a way I find offensive, socially destructive and abusive of children’s innocence.

Back to the issue – the interview. About a minute of Trump talk ended with Farage neatly comparing Donald ‘does what it says on the tin’ Trump to the failing useless two parties in the UK. Piers neatly butted in (1.18m) to steer the interview – to the Tory leadership race, buttering Nigel up a wee bit and talking a lot, drawing Farage into the subject of the Conservative Party. During Piers’ monologue with a question tagged on, Susanna Reid’s body language is fascinating. Having interjected, mainly to insert adjectives into Piers’ sentences, she glances to producer, blinks frequently, arms folded and seems to be chomping at some bit or other. She is anticipating, preparing for… …for what? A spat? A fight? Piers eventually finds a question (1.50)… “How do we actually technically get Brexit done?” Farage does his job well and projects his message, Reid with chin on hand, leaning forward, staring at Farage. Her chin was on her hand at 2.48m when she took on the questioning duties from her tag team mate Piers. At 3.01 Reid plays her first joker, interrupting Farage with a provocative (and revealing to a fakenews sniffer dog) ‘didn’t stay away though did you?’ Farage’s face indicated his instinct – temporary “here we go” resignation face (for a split second) before a seamless practiced response.

“I want to get serious for a moment” says Piers, repeating the words serious and Brexit. Now then Piers? Serious stuff like debt, health, education, jobs, tax and stuff? …No. What takes up the remainder and majority of the interview is discussions around homosexuality and whether a person with a Christian view (specifically Ann Widdecombe) should be ‘allowed’ to hold office.

To the nuanced viewer, the discussion is well handled by Farage who finishes the piece well, extolling the true meaning of tolerance as Piers and Susanna hammer home their own intolerance of the views held by many regarding the sinfulness of homosexual behaviour. The content of the conversation is also interesting – Farage insisting that all viewpoints on matters of conscience should have right to be heard and represented and can be accommodated within a political entity, Piers and Susanna preferring evidently a filtering of certain viewpoints as ‘unacceptable’ based, presumably, on their own opinion. The mind-set of the libertarian (Farage) juxtaposed to the mind-set of the authoritarian (Reid/Morgan): the libertarian tolerant and accepting that we are different and the authoritarian, insisting that everybody must think and act like them.

To the five year old listener? The eight year old? To the schoolkids at the breakfast table when dad’s gone to work and mum’s in the bathroom? What did they hear? People arguing about homosexuality… “…what does gay mean Mum? Mu-um. Mu-um?”

Piers manages to express ‘bigotry’ towards those with views on homosexuality yet also says (5.00m) “I don’t agree with bigotry against gay people” – stunning cognitive dissonance. (Piers has been diagnosed with Dunning Kruger Effect before.*)

Possibly one of the most offensive of Piers Morgan’s comments came at 7.00m. For one, the claim that ‘Gay Rights’ is one of the ‘biggest political issues in this country’ is measurably false. And for two, I still await an answer to the question ‘What rights does a gay man (or woman for that matter) not enjoy that others do?’ You know… …that question that degenerate Cultural Marxist child innocence stealers never ask of ‘Gay Rights’ activists who appear to have successfully normalised the concept that the Government should be ‘educating’ infant and primary school children in all varieties and bents of sex and sexuality.

To those who recognise Cultural Marxism, recognise too that in the era of Brexit and Trump – it is eating itself as evidenced by the slide into censorship and the criminalisation of speech. While the plague of Cultural Marxist, postmodernist, moral relativist thought exists and prevail, in our schools and institutions, through a wave of irresponsible and proudly publicly publicised perversions, children and their innocence will continue being harmed. It is for concerned adults and responsible parents to push back against those who equate ‘Gay Rights’ with the right to steal the innocence of children.

[*In 2017, so incensed was Lebanese American academic Gad Saad following a Piers Morgan interview, he immediately put on record his views on the danger and the destructive nature of Piers’ public assault on truth.]

Let me just say something about the N word, yes that troublesome six letter word, that’s right, normal. I know that quite a few of you rarely even step outside of your homes in these [more…]