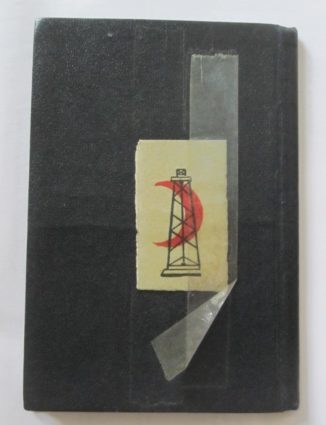 When I took the Libyan job there was nothing in the job description that mentioned furckling around in a dictator’s mouth. Had there been, I still would have signed up.

The position I had been appointed to was actually working as a dentist for the Red Crescent at the National Oil Clinic. Some people I knew had gone to work in Saudi and Kuwait and were doing very nicely but this was the Red Crescent in North Africa and I had to take a ‘pay cut’ . I had no commitments, (or so I thought), in the UK, so the experience seemed worth it and on a two year rolling contract with terminal tax free bonus it seemed a good deal.

I never made the first two years.

The Clinic was a nice modern facility with a dental suite of five surgeries attached to a small hospi-tal with about 30 beds. All around Libya are oil installations and our team was responsible for looking after the workers, some of whom could be travelling for a few days just to get to us. All the treatment was free.
I had Security people come to see me and a chap called Abdessalam Jalloud who had been a powerful influence behind the scenes. I didn’t know who these people were at the time, I’m just glad no treatment went horribly wrong.
I also looked after Embassy staff. The UK obviously didn’t have an Embassy but we had a diplo-matic presence in the Irish Embassy and there were Italians and Germans there as well that I saw. The massive benefit of this was that as well as going to some posh parties, I received gifts, bottles of smuggled in spirits, mainly Ballantines Whiskey, which for some reason seemed to make me pretty popular.

I had learned at the initial ‘suss me out’ reception party that the previous British dentist, who had been Gadaffi’s dentist for a number of years, had apparently done a runner from Libya over the Tunisian border on a motorbike along with his dental nurse and an attache case full of cash. This all sounded good to me.

The ‘Head’ dentist was a guy called Abbass, a Lebanese who had trained in Russia. There was Marwan, an Iraqi who had trained in Yugoslavia and a Palestinian woman who had supposedly trained in Czechoslovakia. I say supposedly as either the Czech teaching methods were bizarre or she wanted to be in a remake of Psycho as she used to attack patients with dental elevators like a crazed Norman Bates on speed.

Then there was Drebi. He was a ‘hygienist’ and quite possibly the laziest twat I’ve come across in my life. Back then my knowledge of Islam and muslims was pretty much zero as they didn’t figure constantly in the news like today. However, Drebi was ‘Hajj’ and had done that particular Islamic pillar. When we see pictures of vast numbers of them all wandering round the big black box, tram-pling each other to death and generally setting fire to stuff and their co-religionists once a year, it looks like they have all done hajj. But there are so many muslims that only a small percentage have done the pilgrimage, especially back then. So Drebi was treated as a sort of demi-god. He used to have only three or four patients booked in a day as he spent so much time alone in his surgery praying. He wasn’t to be disturbed.
I disturbed him as often as I could and probably only caught him praying a couple of times. Usually he was reading a newspaper, staring out of the windows at the hoards of feral cats that ferreted around the bins, or asleep in his dental chair.
He didn’t like me, and I didn’t care.
He was a liar.

The dental nurses were Olga, a very leggy Russian who, out of work, favoured micro skirts, Barba-ra, a Filipino who was lovely and very popular and two Irish girls, the ditzy Karen and Suzanne, whose thieving and concealment skills were to come in useful.

The receptionist was Hetty, a Finnish woman of a certain age who had married a Libyan, moved to Libya and regretted her decision. Why she didn’t move away I don’t know and never asked.
Around the clinic there were quite a few Irish girls who had met terrific Libyan men in Ireland, got married, had children and had come to Libya with their husbands who, once back home, had turned out to be not so terrific. Without a single exception, they all regretted what they had done and where they were. However, what kept them in Libya was their children, so although they felt trapped, there was not a lot they could do about it.
Hetty had no young children so no such excuse to stay but she vented her frustration by being vile to the Libyans who turned up to make appointments.
Hetty had a system whereby the patient had to turn up at the clinic before 9am to make an ap-pointment in person. Bearing in mind some patients had spent a couple of days or more travelling to the clinic, getting there early was not always possible. She used to send them away to return the next day, so her working day was usually pretty much over by 10 other than checking in patients who had appointments and turning new ones away.
She revelled in the power until the system was changed.
She was a witch.

Sean from Naas was my dental technician. He’d been in Libya for many years and was thus nick-named ‘Shakey’ due to his alcoholism. The only person I’ve ever seen who has not been allowed to board an aeroplane.
Sean and I became very good friends. We had adjoining apartments in the compound and had a good thing going brewing about 150 pints of beer a week. Fortunately he had a car, a knackered old Datsun which was our workhorse for buying and carting all the sugar and delivering the goods.
Being a technician he also had access to gold, needed for the crowns and bridges I made.
Unsurprisingly, this was a little gold mine for us too.

Sean didn’t really eat much, mainly drank and was about 7 stones wringing wet for his 5’6” height.
I’m 6’3” and used to eat a ton and like a beer, so together we looked fucking ridiculous, but when the Datsun drew up and we opened the boot, we were always welcome.
The main problem with Sean’s shaking was that if he was having a particularly bad day then the crowns and bridges he was making could not be the best. This had implications in the
Bab al-Azizia barracks.

Sean had been saving with the idea of retiring to the Philippines. He’d been a few times and was convinced he could live like a king for a few thousand a year. He already had a working girl over there who was going to settle down with him in a kind of Far East ‘Pretty Woman’ scenario, albeit with a shaking Irish alcoholic rather than Richard Gere.

Sean died in Ireland 25 years ago.

An ex-pat community will have more than it’s fair share of characters especially, maybe, in some-where such as Libya and some may come into this tale if there is any appetite for further instal-ments. Vesna for instance, a Croatian microbiologist who I had a little fling with, was completely flat chested. Well she was, but after I returned to the UK she pitched up out of the blue one day sporting a pair of enormous fun bags that she had purchased in Zagreb and thought I might like to admire them.

The Clinic Director’s secretary, also a Barbara but an Irish one, had an apartment on the floor above mine. One evening I had a few people round my apartment and we had been smoking and getting stuck into beer, wine, flash and whatever else there was. (More about alcohol later).
Anyway, the intercom buzzed, someone answered and it was the front gate night guard. We were told that there was Security that had come to collect me because The Colonel wanted me to go and do some work on his teeth there and then.
This was not a good situation. In fact it could be described as a very bad situation. The guard was told I was not there, and so I needed to be not there, as the Security may come in to check.
I left my apartment and went to Barbara’s where I needed somewhere to hide until the coast was clear.
Barbara had a wardrobe.

Part 3 maybe: ‘Thieving from a Dictator and Alcohol’, part one here.

A Balls-Up in and out of the Barracks

Everyday dental life in the Clinic was fairly normal. Normal that is if I had been used to working in a practice with limited equipment and materials, alongside three other dentists, one of whom had [more…]

Things are finally looking up for the Allies at the last month of 1942. The Axis are on the run in North Africa, Operation Torch has been a success though not without some busy bits. [more…]

We reach March 1942 and again, there is not much happening on the ground. It all seems to have ground to a halt and once more Churchill is not amused. The Royal Navy is still [more…]